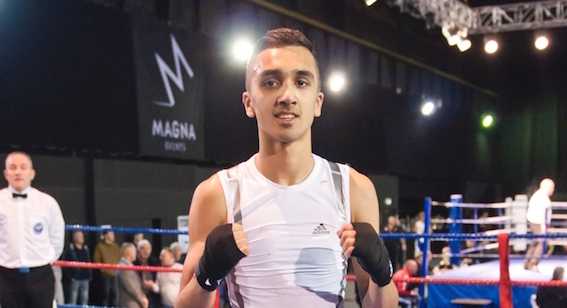 Khan, who is a sports student at Bradford College and is part of their Boxing Academy, beat Ryan Gibbons of Hull to take the honour.

And he wasn’t the only member of the academy to taste victory at the weekend. Mohammed Harris Akbar, of Bradford, picked up an award for his performance in the England Youth Championship Finals. Not only did the Bradford boxer win the final at the 69kg weight category but he also collected the award for the most outstanding boxer at the championships – the Tony Burns Award.

Harris is already a Commonwealth Youth Games gold medallist and member of the England Boxing Youth squad at 69kg.
Both fighters have developed under the coaching of Bradford College’s Mally McIver, who was ringside in South Yorkshire at the weekend.

“It is always good to see our boxers doing well, representing the academy and Bradford,” he said. “There is a lot of talent in the academy and we look forward to many more successes.”