Young people in Leeds who struggle with mainstream learning will soon be able to benefit from a pioneering education facility created from shipping containers.

Planning officials gave the go-ahead for The Works charity, based in the emerging South Bank area of Leeds, to provide an “eco school” – a solar-powered, unique education experience which focuses on practical training and skills, rather than standard classroom-based learning. 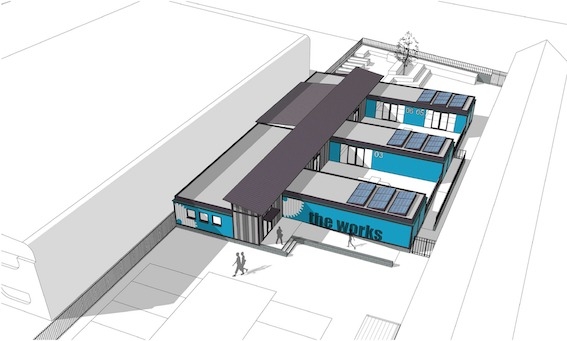 The new facility, which has already attracted interest from education partners in the city for its innovative approach and eye-catching design, follows success of the charity’s existing skate park, which is used to engage people of all ages through sport.

Work, which will be carried out by West Yorkshire-based Ace Container Services Ltd, is expected to begin on site in January and open to young people aged 11-19 in May 2017.

He said: “The skate park has always been a centre for kids and people of all ages, but we just kept developing and it even became integrated into the sports curriculum in schools.

“We realised some of these young people are not supported enough and they need a different approach to learning. They are switched off from the journey that education is currently providing them with.

“I want these kids to be motivated to show up and feel valued. We need them to help build the economy going forward and if it’s just about league tables, that doesn’t do anything for them if they don’t learn best in that way.

“Inside the containers will be workshops for construction and engineering, teaching practical skills such as joinery or plumbing. We will ensure all learners have the opportunity to progress in line with their aspirations, whilst following the national curriculum.

“We’re also encouraging employers to be a part of our provision, mentoring young people to be confident to take advantage of the city’s opportunities.

“We are elated to get this far and it’s going to change education.”

The shipping containers will help form the structure and it will be fitted out to the highest quality standards, including green features such as solar panels and water recovery systems to link in with the “eco school”.

Hosted in partnership with the NHS, it is the first of its type in the UK and works closely with schools, youth groups and other services to help young people get back into exercise while having fun through sports.

Sewell Construction, which has an office in Leeds city centre alongside other partners in the scheme, supported the charity in gaining planning permission for the new education facility.

Although Sewell is not building the facility, the team will continue to be a partner throughout the scheme.

Sewell Development Manager Stephen Dam said: “The project has been a collaboration between The Works, architects Architecture 519, landscape architect Reform and ourselves.

“It’s been great to support Elliott and the team on their way to achieving the charity’s vision and planning is the first major milestone.

“The team are all based locally, so it’s a true community effort in helping to transform the charity and the South Bank area.”

The Works is close to the education hub in the South Bank, adjacent to Leeds City College, the new University Technical College the Ruth Gorse Academy and Leeds College of Building.

The aim is for the “eco school” to partner with academies, as well as the health and social care agenda to achieve better outcomes for young people.

Those who use the facility will be referred to the charity by their current schools.

Elliott said he could not have come this far without the backing of the partner companies involved.

He said: “We wouldn’t be here now if it wasn’t for them. Their effort and expertise has been a huge support and they have sculpted it into a ground-breaking, flexible project.

“We had the vision and they have gone so far out of their way to make it a reality.”