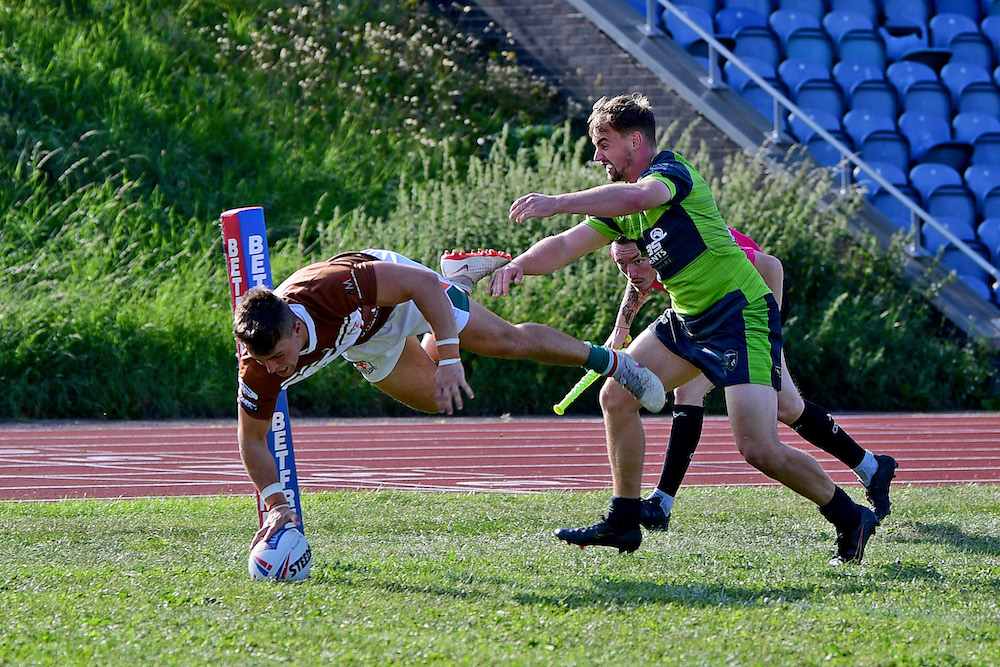 Hunslet ended their home season with a resounding win over the West Wales Raiders today at the South Leeds Stadium (5 September 2021).

It wasn’t quite a record win, but coach Alan Kilshaw will be pleased with the performance and the fact that ten different players scored tries in the rout.

With Barrow scoring a last minute winner at Rochdale Hornets it now looks like Hunslet are almost certain to qualify for the BetFred League 1 play-off’s.

From the off the home side were on top, a clever Jy-Mel Coleman kick sent in Dominic Brambani after only 2 minutes. The impressive Joe McClean cleared a path for Brambani to chip a ball for Kiedan Hartley to score and Hunslet were 12-0 up after only 5 minutes.

A big score looked on as first Vila Halafihi nipped over before captain Duane Straugheir finished off a fine move including a sublime Will Cooke pass.

Brambani had brought his kicking boots and Hunslet led 24-0 after only a quarter of an hour.

A mistake from the kick off gave West Wales a chance for a quick reply, and disappointingly Morgan Evans was able to score from close range. 24-6

It would be harsh to say that Hunslet weren’t dominant though and after Matt Chrimes picked up a loose Brambani kick to make it 28-6, the same player doubled his tally on 32 minutes after great passing by his team mates.

So 32-6 at the break and it looked like a long afternoon for the Welsh visitors.

Only four minutes into the second period and that man Brambani found space again to deftly kick it onto a sixpence for Reece Chapman-Smith to score. 38-6

It seemed to be little chip kicks that were opening the Welsh defence, and moments later Lewis Young teed it up for Hartley to bag his second of the afternoon. 44-6

The attacks kept on coming, and signing from Oulton Raiders, Harvey Whiteley grabbed a try from close range to bring up the half century.

Hunslet were now opening up play, and Vila Halafihi made a great break before feeding Lewis Young who’s pace was too much for the West Wales defence. 56-6 and 20 minutes to go.

Sad though it is to see a one sided game, it will be great for Hunslet’s confidence after recent matches to be scoring great tries, and Kiedan Hartley completed his hat-trick with a belter. Good attacking play saw Lewis Young throw out a beautiful pass for the winger to dive over in the corner.

Next up was Lewis Wray who dived over after another Brambani ball, and after McClean was held just short Harvey Whiteley bagged his second from close range. 70-6

West Wales now showed resilience and held out the Parksiders for a good ten minutes, before on 79 minutes great handling sent Kiedan Hartley through who fed Jordan Andrade to see the big front rower storm over for a try. 76-6

The icing on the cake happened on the hooter as Matt Chrimes also completed a well-earned hat-trick finishing a long dash to the left corner.

Dominic Brambani converted to round off a great afternoon with the boot, Brambani’s experience was too much for the Raiders, time and space given to him was invaluable as Hunslet launched attack after attack.

McClean, Whiteley and Young also shone for Hunslet as they ran riot at times. It will not be this easy next week in the final league fixture at Workington Town, but if Hunslet want to progress in the play-off’s they must hit a run of form, and there’s no better place than away at the promotion favourites.