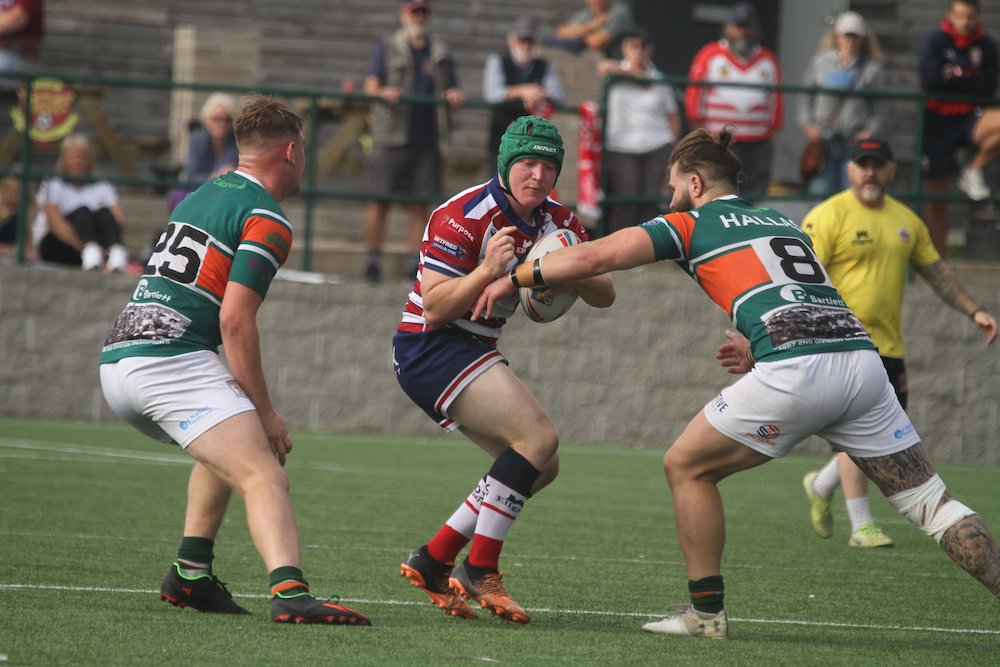 Hunslet’s chance of promotion from League 1 was ended yesterday afternoon (4 September 2022) at the Vestacare Stadium in a tight end to end clash with Oldham.

The Roughyeds have been hunting down Hunslet over the last few weeks and ended up with today’s win level on points but with a better points difference.

It was hard on the Parksiders who were on top for large parts of the game, but Oldham had won the majority of their last few matches whilst Hunslet were on a 5 game winless streak meaning the momentum was with the Lancastrians.

Hunslet started the game with a couple of errors meaning they had defending to do, but they were up to the task and on their first venture into the opposition half a brilliant switch move sent Jason Mossop over on the right hand side. The conversion was missed but Hunslet led on 7 minutes 0-4.

Shortly after Josh Jordan-Roberts ran strongly through a couple of tackles, then dummied his way over to score a fine try. 0-10 and Hunslet were at a point a minute.

Oldham had to respond being the home team and both Jack Render and then on his own line Patrick Walker both pulled off brilliant try saving tackles.

Hunslet’s goal line defence was good in general and they could have extended their lead when both Jacob Doyle and Jordan Paga went close. Another try now may have killed off Oldham, but on 27 minutes the Roughyeds put in a superb 40/20 to get a set on Hunslet’s line. The Parksiders scrambled well but on the last tackle Wellington plucked a kick out of the sky to score and Oldham were back in it. 6-10

Matty Beharrell looked to have scored as he dummied his way over the line, but was deemed to have dropped the ball before again Patrick Walker was saviour stealing the ball from a dangerous Oldham attack. So 6-10 at the break and all to play for.

It felt like Hunslet were more than 4 points better at the end of the first half and so Oldham were always going to come out invigorated. It only took 3 minutes for Yarrow to score close in from a Hewitt pass. Ridyard converted and the home side led for the first time 12-10.

Hunslet responded and Joe Summers found a gap. He fed Jack Render and the winger was held just short. The Parksiders were knocking at the door. But an over enthusiastic pass was plucked out of the air by Oldham winger Owen Restall who raced 90 yards to score. 18-10

The setback didn’t stop Hunslet and it was Oldham’s turn to show good goal line defence as both Jordan Paga and Jacob Doyle went close to scoring.

Eventually on 61 minutes Jack Render got up high to take a Beharrell kick and then showed great strength to reach out and score. But the try went unconverted and Oldham still lead 18-14.

Five minutes later Restall made a break for Oldham and between them Ridyard and Morgan completed the try, Ridyard converting and Oldham led 24-14.

Hunslet’s defence hadn’t been as tight in the second half, but their attack was still sharp and on 70 minutes Matty Beharrell fed winger Jack Render who spectacularly dived over in the corner to complete a brace of tries. 24-18

At only 6 points behind both teams knew a draw would be enough for Hunslet, so on a venture into the Parksiders’ half Oldham went for a one pointer, but to no avail.

In added time it was Hunslet again asking questions and in a last ditch effort Beharrell put a kick in for Jack Render to get a hattrick, but Restall nabbed it and went on another 90 yard spirt to complete his own brace and with conversion gave Oldham a 30-18 win.

It wasn’t today that cost Hunslet their play-off place, but they had chances to win this match. When the dust settles they will realise that they have some good young players in this squad and if that can be built on next year with not so many big spending teams in League 1 they may be able to climb up the table.