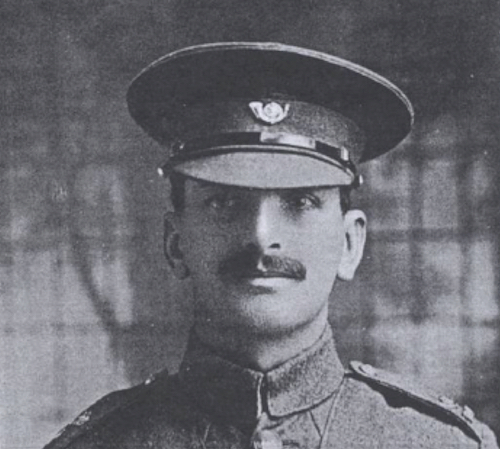 The decision by the Cockburn Multi-Academy Trust to name the proposed new free school after Laurence Calvert was one that came easily.

Former Cockburn School pupil Sgt Laurence Calvert was awarded the Victoria Cross in September 1918 after he rushed a German machine gun post. That action was re-enacted on the Cockburn School playing fields complete with explosions, smoke and the firing of one of only three working Lewis guns in the UK during a memorable commemoration in the summer of 2014 . Sgt Calvert’s grandson spoke at this event about his grandfather’s life and stressed that he wasn’t a superman, just an ordinary person acting in extraordinary circumstances.

Laurence Calvert was born in Leeds on the 16 February 1892 at Selkirk Place, Hunslet and attended Cockburn High School between 1903 and 1906. His maternal grandfather ran the Robert Peel pub in Hunslet and his grandmother was landlady of the Rose and Crown and the Blooming Rose, both also in Hunslet.

After leaving school Laurence worked as a van boy with the Midland Railway Company before moving to Conisborough, where he worked as a miner at Denaby and Cadeby Main Collieries Ltd.

At the start of the First World War he joined the 2nd Battalion of the King’s Own Yorkshire Light Infantry and went to France in 1915. He was awarded the Military medal for gallantry in 1918, and in September of that year the Victoria Cross. The citation for this said that the KOYLI were taking part in an attack on the Hindenburg Line, near the French village of Havrincourt. German machine-gun fire was holding up the advance. Single-handedly Calvert rushed the machine-guns, bayoneting three and shooting four soldiers. The whole crew was so amazed that it was then captured without resistance. This included four officers and 80 other ranks, as well as machine guns and six trench mortars.

After the war Laurence became a regular soldier and on the 11 November 1920 he was part of the guard of Honour at the burial of the Unknown Warrier in Westminster Abbey.

He retired from the army in 1933, but joined the Home Guard in the Second World war. Laurence Calvert died in 1964, but his name lives on in his son, grandson and great-grandson, all of whom are called Laurence.

The London Gazette article in 1918 about the V.C. award winner spoke of Laurence Calvert’s “conspicuous bravery and devotion”, “valour and determination” and “personal gallantry”. The qualities link closely to Cockburn School’s Values such as Resilience, Responsibility and Independence – values that will be instilled into the future generations of children from south Leeds in the new free school should the application be successful.