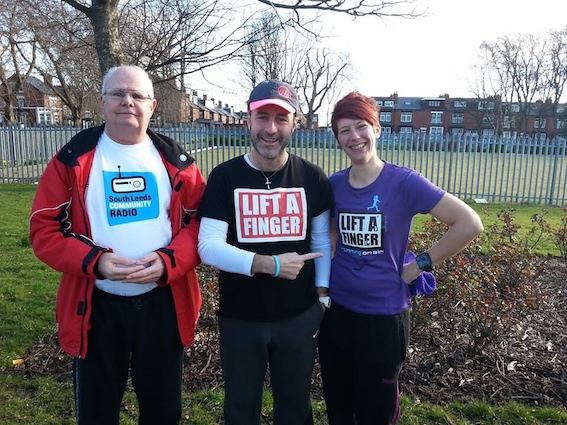 A new weekly radio show and running group at South Leeds Community Radio is hoping to encourage people in the area to take up running to boost their physical and mental wellbeing.

The two-part initiative, called running on air, is led by keen runner Gemma Rathbone, a new volunteer presenter at SLCR.

running on air the radio show has been broadcasting via the SLCR website since March, and the running group starts on Tuesday May 6th, 60 years to the day that Roger Bannister ran the world’s first sub-4-minute mile. That iconic moment is one of the highlights of British athletics, and continues to inspire runners.

“Since I took up running two years ago my life has changed for the better in so many ways and I want to help other people find out for themselves that being active is enjoyable and hugely beneficial in all sorts of ways,” Gemma explains.

“Running has become a way for me to manage mental health issues, make friends and explore the world and I hope the people of south Leeds will join me by tuning in and turning up each week.”

The running group meets at the station at Ashbrooke Park at 12.30pm every Tuesday. It is open to everyone and sessions will be tailored to suit ability, starting out with jog/walk and working up to running a 5k at Cross Flatts parkrun this summer.

“It’s a straightforward plan that builds up very gradually and is aimed at complete beginners,” Gemma explains.

“We even have a load of kit for people to use – from water bottles and vests to the latest running shoes – thanks to our friends at Lift A Finger and Up & Running.

“What’s really important is that people come along and give it a go, no matter what their current level of fitness or what they wear. It’s really simple to get started with running and I’m looking forward to sharing my passion.”

A new show will be broadcast every Monday at 1pm, then repeated each weekday at the same time. Listeners can tune in via www.slcr.org.uk, or for those who can’t listen live the shows will be uploaded to YouTube the week after initial broadcast.

Each week running on air will feature chat about running, other sports and different ways to be active, interviews with runners, recipes and top tips, and a variety of music.

“I also expect to be talking a lot about mental health and wellbeing, as our activity levels can have a huge impact on how we view and interact with the world,” Gemma adds.

Gemma is a Run England qualified and insured leader, and also a trained emergency first aider.