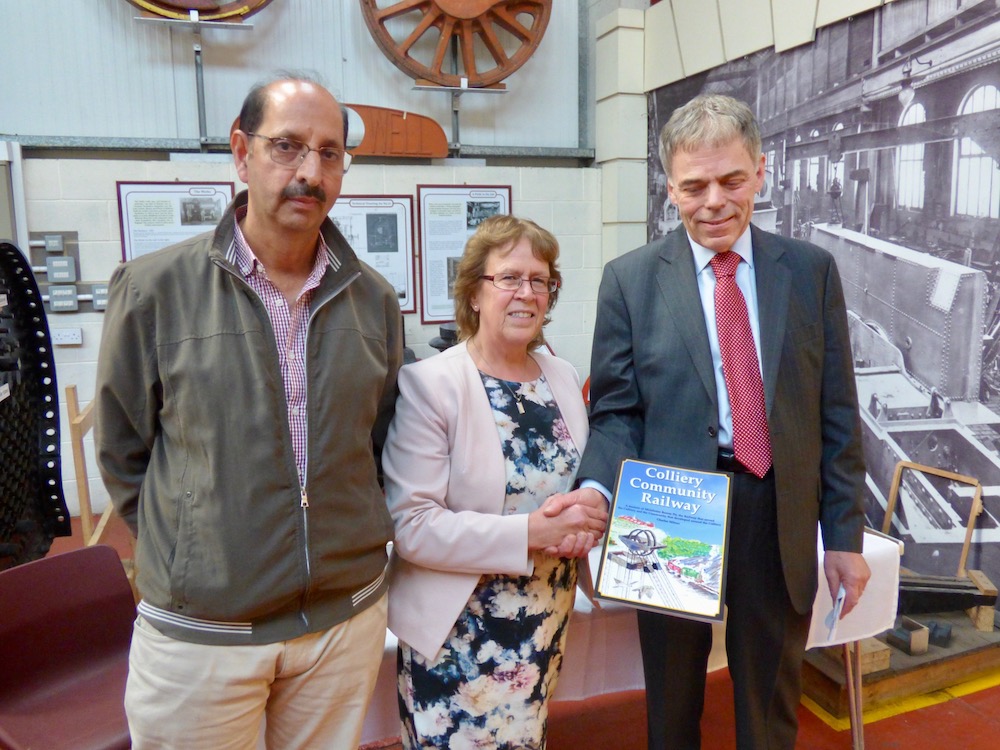 A new book tracing the intertwined development of coal mining, railways and the community of Middleton has been published by the Middleton Railway Trust.

Colliery, Community, Railway, by Charles Milner, was launched at an event at the railway on Tuesday (17 September 2019). It forms the final piece of Last Coals To Leeds, their commemoration of the 50th anniversary of the closure of Broom Pit, which ended a centuries long history of coal mining in South Leeds.

All six councillors from Hunslet & Riverside and Middleton Park wards were present to receive copies of the book, which was funded by the Inner South Community Committee.

“We are pleased to be able to support this project through the Love Where You Live initiative. The earlier booklet went into all the primary schools in the area and seeing the children’s faces and listening to their stories and the fact that it had stimulated them to talk to their parents and families to find out more about the pit and the community was fantastic.

“I think as a city we have got a lot more to do to put on the international stage that this is the first commercial railway to use steam … in the world.

“I’m oftyen asked about the future of Leeds and I say – the future of this city is dependent on its heritage and on the legacy of all the incredible work that went on building our communities over such a long time.”

She went on to pay tribute to the volunteers who run Middleton Railway and have kept its history alive. She looked forward to the challenge of extending the railway back into Middleton Park.

The book is described as a memoir, rather than a history and Charles Milner has sewn together a collage of material that tells the story of a railway and a coal mine and the community that worked on both and was in turn shaped by both.

The book contains fascinating history of coal mining in Middleton (going back to the middle ages); the birth of the railway, first as a horse-drawn wagonway and then the first steam engines; and growth of Middleton from a small village to life on the council estate or “the buildings” as it was called.

The book really comes to life when it quotes people’s experiences, such as this youth club trip to Broom Colliery in the 1960s:

“When everyone was ready we all piled into a cage. The gate was shut and we all held on to hand-rails like grim death. A bell signal was heard and the rope holding the cage took the strain. Then without warning the cage seemed to drop like a stone. I left my stomach at the top of the shaft, our legs buckled with the rate of descent. When we reached the pit bottom our guide told us our rate of descent was slow compared with normal use.

“We walked upright by the side of a conveyor belt (out of use for the day) for a mile and a quarter – I cannot remember in which direction. We eventually reached what seemed like the end of the tunnel, a dead end. Our guide told us to bend low and look under what was a roof of coal, the height of which was only 3 ft. I could see miners spread out on their stomachs and moving along on pads like crabs. I’ll never forget it.”

There is also a fascinating chapter on everyday life in Middleton in the first half of the 20th century, largely drawn from the reminiscences of the Hebden family.

Colliery, Community, Railway is on sale at Middleton Railway’s Moor Road station. At £10.50 it’s a bargain and would make a great Christmas present for the history buff in your family.