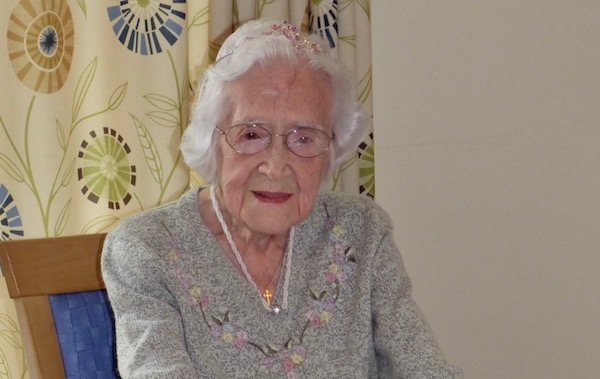 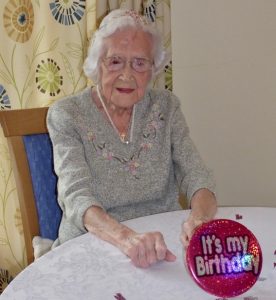 She was joined by her fellow residents, family and friends for a lunchtime celebration. Monica was born in Colne, Lancashire and spent most of her life in Burnley before moving to Leeds to be close to family. Staff went out of their way for her, finding some of her beloved Lancashire Black Pudding for her birthday breakfast.

Monica worked for many years in a range of jobs, having left school at the age of 14 in 1927. She had two spells in the weaving mills where her mother worked, but she hated it there.

“The noise was terrible. You had to learn to lip-read because you could hear what the person next to you said. There was cotton dust everywhere on the floor.” She explained.

She moved to the local hospital where she worked in the laundry. Then when war broke out in 1939 she moved to Lucas making parts for aircraft. Later she worked at Belling assembling electric fires.

She married Edmund Budge in 1936. He served in the Royal Navy through the Second World War and later died from cancer aged just 54.

Monica led a long and active retirement and was still doing exercises classes when she celebrated her hundredth birthday with the Lord Mayor four years ago. She has finally had to slow down following heart and mobility problems, but still does her own washing up and keeps her flat tidy.

Asked about the secret of her long life she says her mother and grandmother both led long lives. For her keeping busy has always been important and she is not impressed with having sit all day.

“She has a fantastic spirit and many interesting memories. She is an encouragement to others, taking part in many of the activities. Residents look up to her as a good friend, she’s loved by everyone here.”