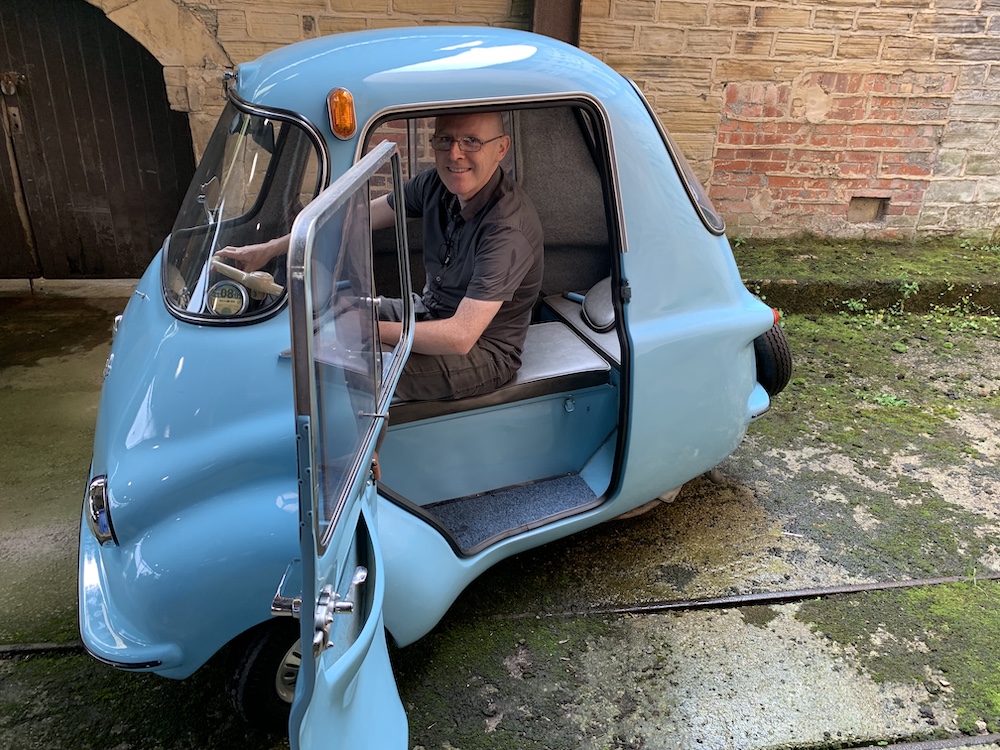 With its quirky design, handlebar steering and a top speed of 50mph, it might not be a modern motorist’s first choice.

But when it comes to tales of Leeds innovation and invention, Hunslet’s very own Scootacar is certainly the wheel deal.

The bright blue, three-wheeled wonder is set to be one of the star attractions in an upcoming exhibition at Leeds Industrial Museum in Armley entitled Leeds to Innovation, which will celebrate some of the city’s creative and scientific minds.

The distinctive vehicles were originally manufactured in the late 1950s by Scootacars Ltd, a division of the famous railway locomotive builder the Hunslet Engine Company.

Their diminutive design was said to be inspired by the wife of one of the company directors, who said she wanted a car that was easier to park than her more bulky Jaguar.

Set to the task of creating the ideal conveyance to meet her request, the company’s top minds began working on the tricky task of making an easy-to-park car with a high enough driving position to give the driver a good view of the road.

Their typically pragmatic solution to perfecting the design was to get a particularly tall employee to sit on a box against a handy wall, set up dummy controls in front of him, then draw a chalk outline around him.

The result was a small but high car, nicknamed the telephone booth, which was produced between 1957 and 1964 with a sale price of around £275. Only around 1,000 were ever made, making the one going on display in Leeds extremely rare and among an estimated 150 left in the world today.

The model which will be part of Leeds Industrial Museum’s exhibition is an original Mark One version, with a 197cc single cylinder engine. It has been loaned by enthusiast Stephen Boyd, 65, from Norfolk, who purchased his first Scootacar in 1997 and whose family now own seven.

“The Scootacar is an excellent example of how, over the years, the city’s scientists, designers and engineers have had their impressive talents brought to bear solving some very unusual problems.

“Fortunately they have almost invariably risen to the challenge, giving the city a global reputation as both a centre of engineering excellence and the birthplace of some truly remarkable inventions and advancements.

“Bringing some of those feats of creativity together for this exhibition will give us the chance to get a more detailed insight into how and why they were made, the people and personalities who made them and the many different ways that Leeds has changed the world.”

Although only a small number of Scootacars remain, owners can be found as far away as Australia, Canada and Japan and roadworthy examples in good condition can fetch up to £20,000.

“This remarkable vehicle is part of the history of Leeds and Hunslet and testament to the ingenuity of those whose hard work and spirit of invention helped our city become a leading light in the field of engineering.

“It’s good to know it will take its place alongside other Leeds inventions in what will be a fascinating tribute to our local history and heritage.”

Looking back at 300 years of history, Leeds to Innovation will also include famous names like John Smeaton, the ‘Father of Civil Engineering’ and designer of the Eddystone Lighthouse, Dr Brian Boffey, whose experiment with hot gelatine created the popular sweet Jelly Tots and Elizabeth Beecroft, who took over the running of Kirkstall Forge in the 18th Century.

For more details about the museum including admission times and charges, please visit: museumsandgalleries.leeds.gov.uk/leeds-industrial-museum