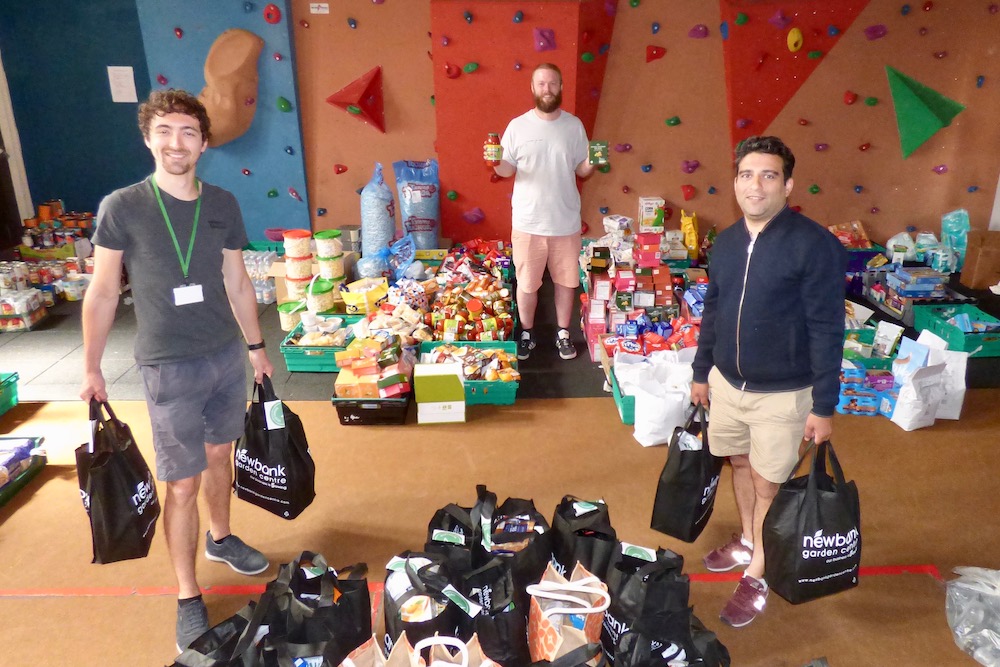 Since Coronavirus hit, thousands of volunteers have been working out of community hubs to keep vulnerable people safe with food parcels, prescriptions and welfare checks. I went along to the Involve Centre in Hunslet to speak to three people volunteering there, at a safe distance.

Oscar Knights had recently finished his PhD studies developing treatments for lung cancer and was looking for a job when recruitment came to a full stop due to the lockdown. Not wanting to get bored in his flat and keen to be useful he signed up with Voluntary Action Leeds and was put in touch with Involve.

You will normally find Andy McLaughlin behind the bar at Friends of Ham in the city centre, but with the venue shut he too had time on his hands. Furloughed and about to become manager

As well as mentoring teenage boys in school, Liaqat Ali (everyone calls him Ali) runs Leeds Pride, but generally gets involved in community activities wherever he feels he can be useful.

A typical shift will involve making up food parcels, tailored to individual dietary requirements and then delivering to people’s houses. There might be shopping to do on behalf of people who are self isolating. Sometimes they visit people’s houses who haven’t been responding to phone calls to check they are OK, or whether they need anything.

Having started on the phones, Andy is now part of the co-ordinating team matching volunteers to requests for help.

“Co-ordinating a team is something you have to do working in a bar and its come in useful here, otherwise I might not be so confident telling a volunteer to come at this time and do that.”

“You do get the odd curve ball here, which obviously you get a lot in hospitality. You have to think on your feet so again that’s something hospitality has taught me.

Ali saw a need for halal meat in the parcels as Ramadan turned into the Eid celebrations.

“When you’re packing and the slip says Halal only, there’s not always a great choice – there’s only so many cans of tuna you can send to people.

“I started fundraising for £50 and raised £350 in less than a week, it’s been absolutely amazing. We’ve done a deal with a halal butchers and we’ll be able to do 30 food parcels with halal meat.”

Oscar, Andy and Ali all come from the city centre end of the Hunslet & Riverside ward.

“It’s meant going to areas I might not necessarily go to, meeting people I wouldn’t necessarily meet in normal life” explains Oscar. “It’s been extremely rewarding, making a connection with people.”

“Even though we all live in the same ward and we volunteer in the same ward, there’s lots of differences within our ward. There’s the affluent city centre, but just on the outskirts there’s lots and lots of deprivation. We don’t normally see that because we live in our little city centre bubble, but it’s happening on our doorstep. Driving around, knocking on people’s doors, it’s such as eye-opener. Because of this we’ve got a lot closer to our neighbours.”

I ask them how they will look back on this time.

“I feel that if I’d had a job I would have missed out on something special” says Oscar.

“I think we’ll learn from this there will be a little bit of a reset. I think people will volunteer more of their time and look after our communities a little bit more” adds Ali.

“It’s been interesting, a good experience. I can’t wait till its all over though!” concludes Andy.

Photo: Oscar Knights, Andy McLaughlin and Liaqat Ali in the food hub at the Involve Centre