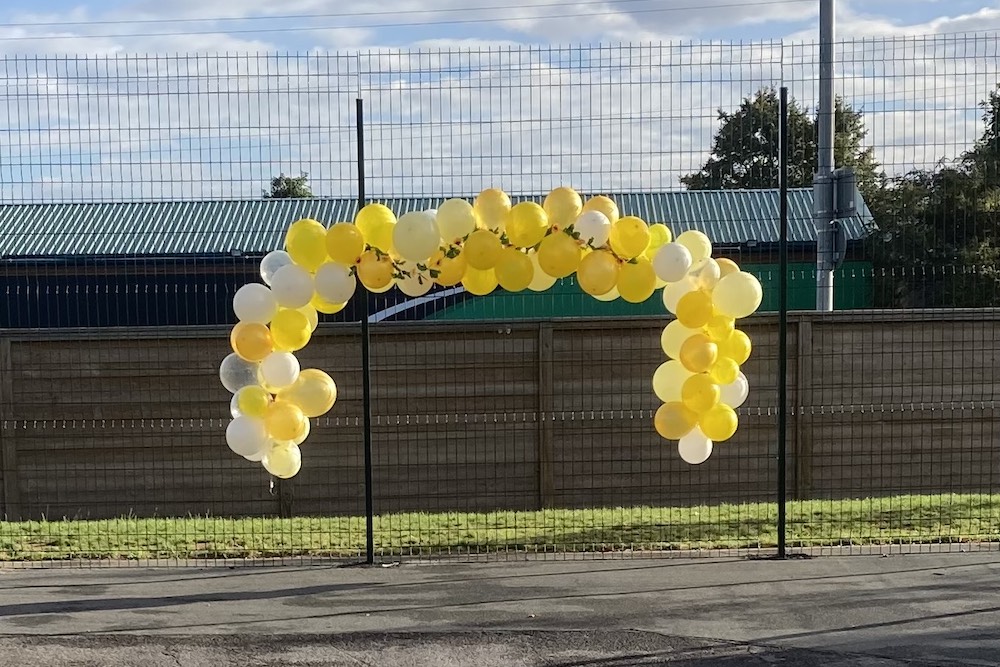 Low Road Primary School, Hunslet, hosted a Golden Ribbon Run in aid of the Childhood Cancer and Leukaemia Awareness Month. This came almost a year-to-the-day of the diagnosis on a then Year 1 pupil.

In September 2021, then Year 1 pupil Anabella was diagnosed with cancer (alveolar rhabdomyosarcoma on right temple) and it changed her world forever. Anabella’s mum attended the event and shared her story with Cllr Paul Wray and I. She explained that she started treatment as soon as possible and had an operation to have her central line fitted and receive chemotherapy.

The amount of support the school have offered Anabella was plain to see. Anabella’s mother, Anara, recalled the phone calls and visits the school provided Anabella with during her treatment before and after her visit to Germany where she received specialist proton beam radiation treatment (funded by the NHS). Consequently, the whole school took part in the Golden Ribbon Run from nursery pupils as young as 2, to the eldest pupils in Year 6. There was no shortage of generosity with some children were raising in excess of £100 to show their support.

Tracy Smith, who works in the Year 3 class and the after school club, was quick to volunteer to make yellow ribbon pins. She provided every pupil and staff member with them, making over 300 to distribute.

“Despite not living in this community, I fully back everything The Music Federation stand for. When it was discussed that we would be taking part in this event, I needed to go that extra mile. Many of my friends and family have been affected by cancer and this is a cause close to many people’s hearts including mine!” she said.

The Golden Ribbon Run would not have gone as smoothly if it wasn’t for the willing volunteers who helped to marshall the event. Volunteers such as Claire Hague, Sophie Hague, Nicola Sawyer and Louise Lavin who all came into school when they were not due to work to help and encourage the children complete the various courses!  Anabella even received a message of encouragement from former Reception Class teacher, Sam Harding, and there was not a dry eye in the place!

Lucas from Nursery was the first to complete the run, completing his 1km with Year 6 helper Abdulqadir. Both boys beamed with pride upon finishing and Abdulqadir went on to complete a total of 7km through helping the younger pupils and his own 5km Golden Ribbon Run.

The fundraising doesn’t stop there! I spoke with Caroline Harvison, Deputy Headteacher, who explained that once the Golden Ribbon Run was complete, she was keen to begin to plan the next one for Windmill Primary School which is also part of The Music Federation. Mrs Harvison was very keen to stress the schools want to find a way to continue to educate others.

“It taught the younger children about fund raising as well as the importance of caring for others. All the children were interested to learn about what makes us different and unique; it sparked conversations about disabilities and why they exist. These discussions are not naturally covered within the curriculum but it is something we will now cover in the future moving forwards.”

“Thank you to Anabella’s mum for sharing her story with me – something which is never an easy task when it so personal. The almost hour we spent talking highlighted a real and troubling issue we have about recognising the issue of childhood cancer. The lack of approved drugs for children is shocking, as is the lack of formal support for children and families beyond the small number of dedicated charities such as Candlelighters. I’ll be raising Anabella’s story to partners within the Council and beyond as clearly something needs to change to support both the children and their families.”

The event was also attended by The Green Party’s Councillor, Ed Carlisle, who was keen to support the school’s fund-raising event.

“We are so grateful to the school for the support and we thank them for doing this. I hope to raise awareness; at the moment that’s my only goal.”

“It has really helped to raise awareness of cancer and childhood cancer in a child-friendly way. Many questions were asked and it is great to hear their inquisitiveness.”

When the Y5/6 pupils, who were completing the full 5km run, started to lag, Rachael Troughton (Federation Headteacher) was quick to join the run encouraging all the children to finish as best they could. It really was a school community event with many staff joining in.

With the help of Morrison’s Community Champion, Kelly Cheetham, Low Road Primary school have been able to reward class prizes for those who have raised the highest amounts of money. This has been a great incentive. The school raised a total of £2,800 which is the most they have ever raised with one event.

I’m sure the good people of South Leeds will join me in wishing Anabella and her family all the very best for the future.