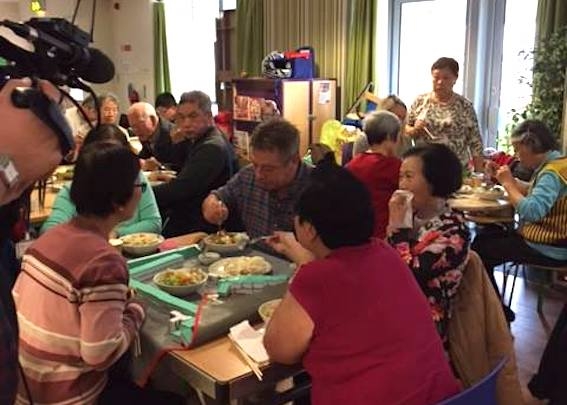 It’s a long way from Belle Isle Family Centre to the BBC in London, but it’s a journey members of the Lychee Red Chinese seniors group are making on Friday (27 October 2017) to appear on The One Show.

Presenter Andy Kershaw has been visiting the group for a couple of weeks with a film crew and the film will be shown on Friday at 7pm on BBC1. Three members of the group are travelling down to appear in the studio and cook Chinese dumplings for the presenters.

The film highlights the very real problem of social isolation amongst older people and the work that groups like Lychee Red does to over come it.

Lychee Red is supported by South Leeds charity Health For All and funded through the Big Lottery Fund’s Time To Shine programme run by Leeds Older Peoples Forum. The group set up at Beeston Village Community Centre, but have moved to Belle Isle Family Centre whilst the new Beeston centre is built. Needless to say they have made many friends in Belle Isle.

So make sure you tune in at 7pm on Friday, or catch it on the iPlayer.