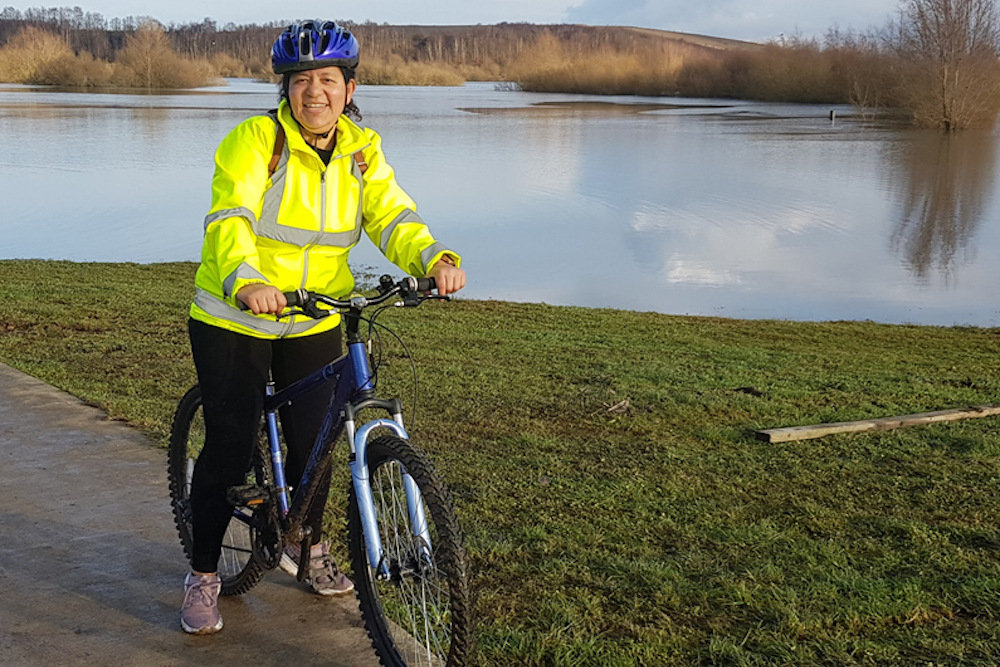 For Bike Week 2021 we are running a series articles about opportunities to get cycling in south Leeds. Beeston Hill resident Clara has shared how she got into cycling last year:

“I was 13 by the time I first had a go on a bike. So I tried it out once or twice and one time I fell off, I got scared and I never got back on a bike again until recently.

“Back in March last year, when lockdown started – learning to ride was always in the back of my mind. I have three kids, and we’re a very active family – we love walking and I love going out and about, but I didn’t know how to ride a bike.

“So I searched for lessons online, and I came across the training that was being delivered by City Connect, running at Cross Flatts Park. My first session was in August, and I did about 10 lessons. With each session I slowly grew in confidence.”

After the initial lessons Clara got a bike through the Leeds Big Bike Fix, which takes donated bikes, volunteers do them up and then they’re donated back out to the community.

“The bike had a few problems, I went back and they fixed them. Although my three children all had bikes, my husband didn’t – and he received a bike from the Big Bike Fix project as well. The project just kind of worked off the street – it was amazing – the project kind of converted a small yard into repair shop.

“After the cycle classes, I got really confident on my bike, and I have been going for bike rides on my own and with my kids, every Saturday, something we couldn’t do before. And I’ve learned about new places that you can ride – like the canal – I didn’t know about it before – so we all go there together as a family.

“I’ve also gone with groups of friends – because we could exercise together outdoors in group of six – so we have been on two rides together.”

On the confidence building sessions Clara and the group were taken as a group on a ride to Temple Newsam. “That was really helpful! That helped me develop a lot of the skills that Chris had taught us in the classes.

“I think those rides out were really useful because, someone like me I learned to ride – that’s fine – but getting out and about will make you feel more confident using roads and visiting new places where you wouldn’t actually go if it was just you.

“If there was a group locally that went for short rides that would be great for me. I’m kind of like intermediate at the moment – I’m not confident to cycle on the roads in Leeds city centre yet. I’m still avoiding very busy roads – if I come across a really busy road, at the moment – I get off my bike push it to where I can get on a quieter road, and off I go again.

“You can’t imagine the number of people my age who never learned to ride a bike. After I learned, I spoke to a few people and I told them what I had done, and I’ve referred three more people to the cycle training classes.

“There are lots of people out there just like me who for different reasons never learnt to ride a bike. The free cycle training was amazing for that! I don’t think I could have done it on my own.”

Q: How would you say cycling makes you feel?

“Oh lovely, is one of the best things I’ve ever done I really love it, I never thought that I would like it so much! It’s like doing an activity, being active, and you don’t have to force yourself to go to the gym.”

Q: Are there any other benefits you think you get out of cycling?

“Because I’m riding now, I’m helping not only myself, but my kids to be confident riding. My daughter next year is going to go to High School – if the High School is within cycling distance, she could ride to school. I think that would be really good.

“When we know which high school she’ll be going to, we were thinking of cycling there and back with her together a few times, to give her the confidence to cycle there on her own – that would help her.

“I think we should think about the access to high schools for kids – so that they could get to school by bike.

“I think you it would help make people more confident cycling – if we know that the roads are safe, or if there are special cycle routes just for people cycling.

“I think for your mental health you need to get out at least once a week.”

Q: What would you like to do in the future?

“I would like to do some more advanced cycling. I would like there to be more groups who can help people raise their confidence by going on rides from where they live. I think it would be good to have that kind of support after we learn how to ride.

“I think it would be really good to have activities for kids – so that they can learn to ride – so that people don’t get to their 40s like me, without being able to ride a bike.

“I think local repair projects like the Big Bike Fix is really important – people in your local neighbourhood who can maybe help with small fixes that can keep your bike ‘on the road’. There are lots of people who can’t afford to get repairs done in bike shops, so a project like this one is really valuable. Everytime I go there with a problem, they try to show me how I could fix it myself next time.

“I really couldn’t have done it without both the cycle training and the Leeds Big Bike Fix project.”

Clara is now looking at one day becoming a ride leader, to support others in a sociable way to enjoy cycling too.