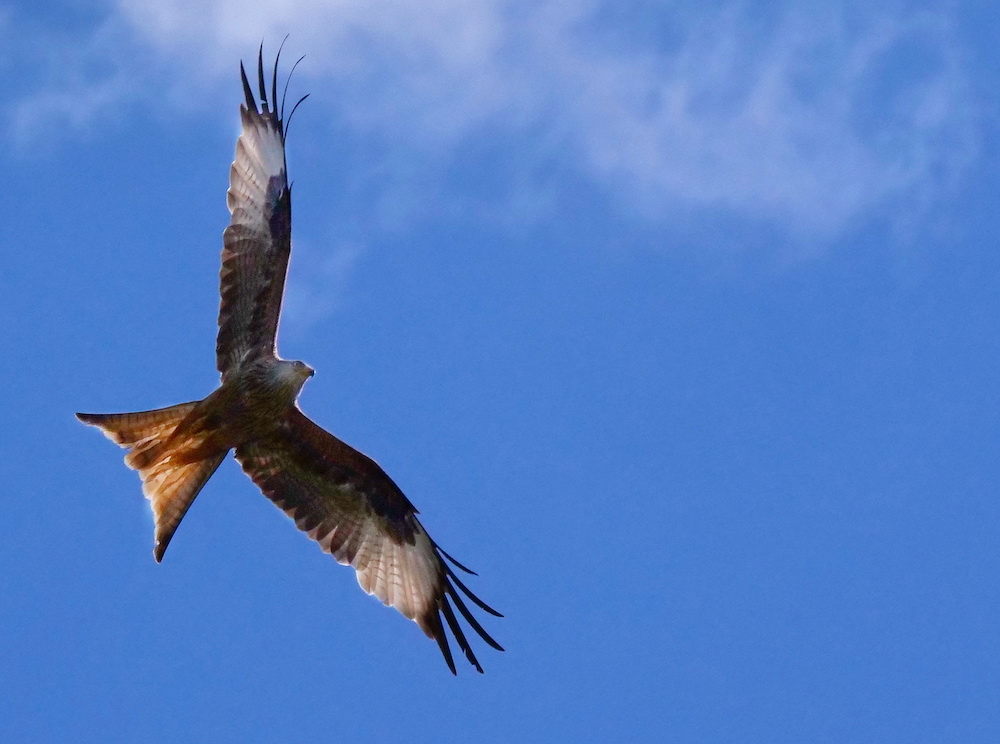 With a wingspan approaching 2m and a distinctive forked tail, Red Kites are becoming an increasingly common sight in the skies above South Leeds.

This magnificently graceful bird of prey is unmistakable with its reddish-brown body, angled wings and deeply forked tail. As it soars over woods and open areas, its distinctive shape and ‘mewing’ calls making it easy to identify.

It was saved from national extinction by one of the world’s longest-running protection programmes. It has now been successfully re-introduced to England and Scotland. Red Kites are listed under Schedule 1 of The Wildlife and Countryside Act.

Red Kites breed between March and May. Mates pair for life and will use the same nesting site each year.

The Kite has excellent eyesight and hunts by soaring and circling over open country often at a considerable height and it also frequently adopts the strategy of gliding low over the ground.

Red kites were common in Shakespearean London, where they fed on scraps in the streets and collected rags or stole hung-out washing for nest-building materials. Shakespeare even referred to this habit in ‘The Winter’s Tale’ when he wrote: ‘When the kite builds, look to lesser linen’. The nest of a red kite is an untidy affair, often built on top of an old Crow’s nest. It is lined with sheep’s wool and decorated with all kinds of objects like paper, plastic and cloth. In King Lear Shakespeare describes his daughter Goneril as a “detested kite.”

The first recorded use of the word “kite” for a toy that is attached to a length of string and flown in the air dates from the seventeenth century.

By the 20th century, the breeding population was restricted to a handful of pairs in South Wales, but recently the Welsh population has been supplemented by re-introductions in England and Scotland.

Red Kites were released on the Harewood estate near Leeds in 1999 as part of a UK conservation initiative. Harewood Estate was originally part of a partnership involving the RSPB, English Nature, & Yorkshire Water PLC. Their spectacularly successful re-introduction to Lowland areas of Yorkshire is now complete. The Red Kite now has a self-sustaining population, whose numbers are gradually increasing year on year. At the last count there were over 300 Red Kites in Yorkshire.

Red Kites are 60-66cm in length with a wingspan of 175-195cm. They weigh 800-1,300g. Their diet consists mainly of carrion and worms, but they are opportunistic and will occasionally take small mammals.

This photo was taken by Paul Johnson (Phoenix Photography) at RSPB St Aidan’s reserve on the River Aire.