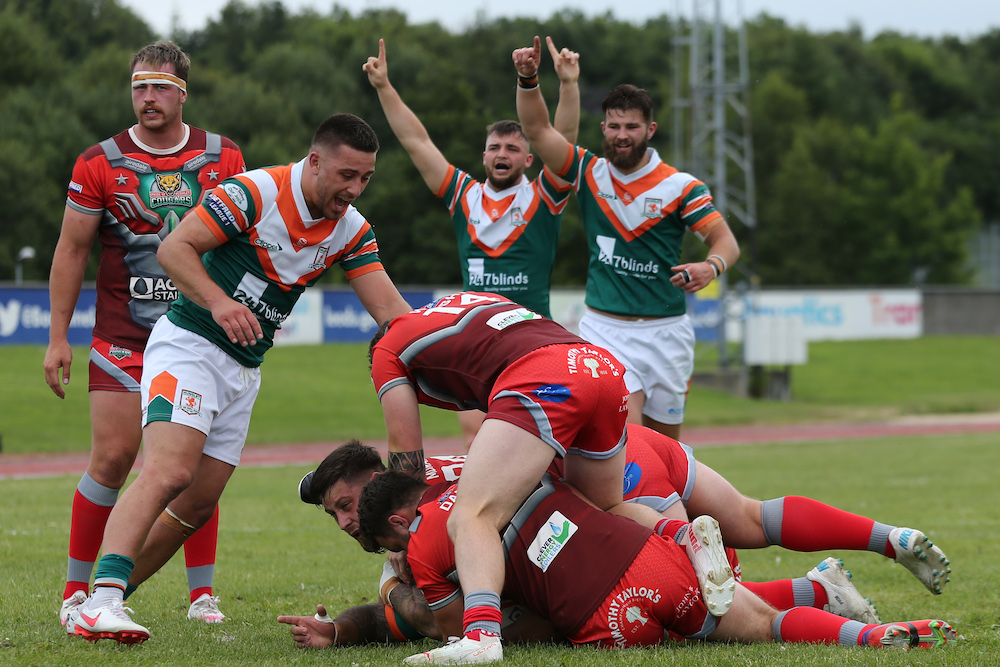 New Hunslet RLFC boss Alan Kilshaw was only a minute or two away from a dream start to his tenure at the South Leeds Stadium today (25 July 2021) but Keighley Cougars had other ideas, scoring two late tries to steal a 20-20 draw.

Hunslet lead 20-10 on the 80th minute, but there was quite a lot of time added on for injuries and with some skill and some luck the Cougars managed to steal a draw.

Kilshaw will be happy with his charges’ performance having only 17 fit players to pick from due to Covid and the eventual Man of the Match Nathan Conroy could have been any of a dozen players.

Hunslet, missing Captain Duane Straugheir, Tom Ashton, Simon Brown, Dominic Brambani and Zac Braham to name but a few, looked to have opened the scoring on 4 minutes when a tremendous David Gibbons ball nearly sent Alex Brown over in the corner, but the winger was adjudged to have knocked-on.

Weak tackling though meant that Cougars Scott Murrell could carve a gap for Daniel Parker to score on the 5th minute to give Keighley a 0-6 lead.

Hunslet tried to hit back when David Gibbons broke and Alex Brown was held just short, Jordan Andrade was setting up to score but lost the ball and Keighley could breathe again, indeed both sides had good spells before, on the 30th minute, Taylor Prell stretched over to extend Keighley’s lead to 0-10.

The Cougars knocked-on from the kick off and Hunslet struck straight away when Jordan Andrade proved too strong near the line. Jy-Mel Coleman converted and suddenly Hunslet had the momentum.

With half time approaching Andrade again went on the rampage and touched down under the posts (with his shorts a bit low for the viewing fans in the stand) and with Coleman’s conversion Hunslet led 12-10, it was now Keighley praying for the half time hooter.

The break duly came and with the game on a knife edge it would be interesting to see who came out more fired up. Half time score: 12-10.

Big hits were the order of the day for the Hunslet defence, and Rettie, Andrade and Rowe all received pats on the back from their team mates, after a good set Vila Halafihi grabbed a try and the Parksiders extended their lead to 16-10.

The great start to the second period continued and new man Reece Chapman-Smith was unlucky to be pulled back from a Gibbons kick for Offside.

Hunslet had a few chances to kick at goal, but being on top decided to run before eventually Jy-Mel Coleman took the decision after a high tackle on Andrade to slot the ball over to give Hunslet an 8 point lead.

The game was by now in the last quarter and again after a Reece-Chapman break Coleman took the 2 points offered after a penalty to stretch Hunslet to a 20-10 lead.

The clock had ticked around to 80 minutes when a deft Cougars kick pinged around in the Hunslet try area before Charlie Graham touched down, but with no conversion Hunslet still led 20-14.

Keighley having nothing to lose set the ball to flight and an amazing mazy run by Charlie Graham had Hunslet on the back foot. A lovely ball to Dalton Desmond-Walker sent the prop on a charge to the line. Hunslet full back Reece Chapman-Smith was unlucky in the tackle but the try was scored and with Millar’s conversion we were all square at 20-20.

Even after all that had happened in added time both sides found time to attempt a drop-goal (both unsuccessfully) and when the hooter sounded a neutral would probably say it was a fair result.

Alan Kilshaw has much to take from this game to say that all is not lost this year, but with tough games to come away at Doncaster and Barrow the work only gets tougher.

Stand outs for Hunslet were the lively Conroy, Chapman-Smith and Gibbons , whilst Andrade and Kidd carried the Parksiders forward, Coleman switched play well, but no one had a bad game.