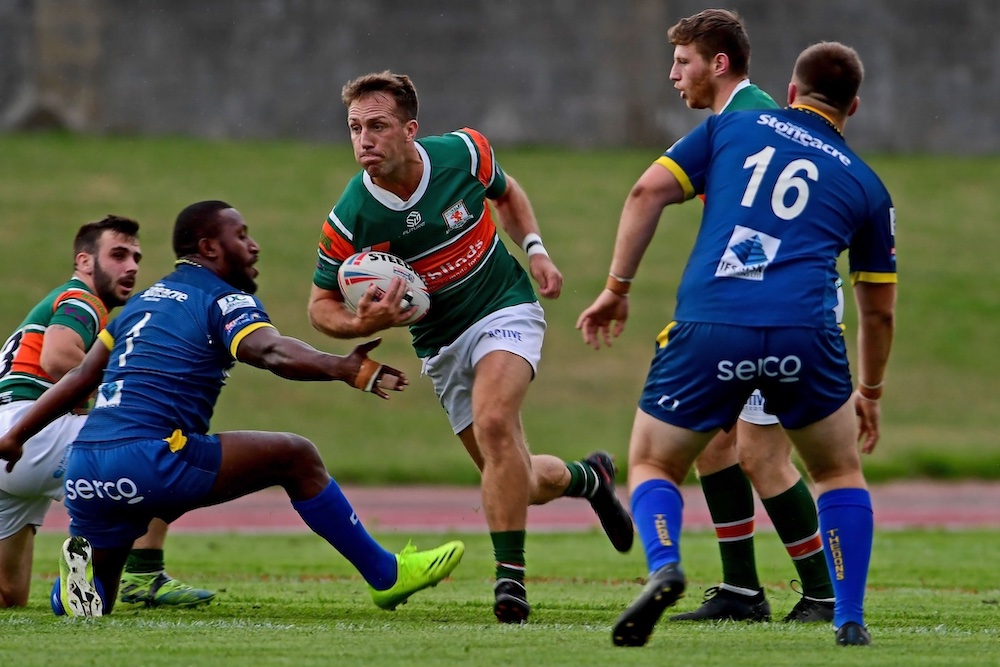 Hunslet’s home season finished on Friday night (26 August 2022) at the South Leeds Stadium with their Play-off hopes going down to the final fixture next week away at Oldham Roughyeds.

Oldham trail Hunslet by two points but have a better points difference, meaning the final league game will determine who gets 6th place and the final spot for the Play-offs.

It was a frustrating night for the home side, playing an in-form Doncaster they led at the break, but the Dons came out firing in the second half to score 20 unanswered points.

Hunslet looked up for it from the start, but on 4 minutes after repeated set restarts Doncaster breached the home line. Ben Johnston stepped his way over and Sanderson converted 0-6.

The Parksiders regained their composure and started to get on top in the game. Harvey Whiteley went close before on 11 minutes, after a brilliant Patrick Walker 40/20, a switch move cleverly sent Jordan Paga over on the right hand side. Walker added the extras. 6-6

Patrick Walker’s field kicking was excellent and another 40/20 gave Hunslet a good position and at the quarter stage former Don Matty Beharrell dummied his way over to give Hunslet a 12-6 lead.

The game was very see-saw with not much between the two sides. But penalties were costing Hunslet as on 25 minutes another infringement for offside meant after quick passing Doncaster levelled up through a Loui McConnell try and a Jack Sanderson conversion. 12-12

Doncaster knocked-on straight from the kick off and former Siddal man Jamie Greenwood was sharp enough to send Josh Jordan-Roberts over for a try. Hunslet led again 18-12.

Hunslet were finishing the half strongly and after Jordan Syme went close Doncaster tried to steal the ball. Patrick Walker took the 2 points after narrowly missing a penalty earlier and Hunslet led at the break 20-12.

Often how you start a half determines how the half will play out and Doncaster came out in the second period firing. A spilt kick gave the Dons field position and Connor Robinson dummied his way over converting his own try to narrow the scores to 20-18.

Doncaster had a habit of kicking out on the full in this match but although Hunslet came close to scoring the ball was fumbled at the critical time. Consequently Doncaster didn’t need warning twice and Ben Johnston bagged his second try of the evening dummying over on frustratingly the last tackle 20-24

Now at this critical time errors started to creep into Hunslet’s game. But Beharrell and Walker kept asking questions of the Doncaster defence.

On 62 minutes the game swung towards Doncaster with a controversial try. On the last Doncaster tackle the ball was released near to Hunslet’s line. It looked to have gone forward, but Jason Tali played on and was awarded a try duly converted by Robinson. 20-30.

Again Hunslet attacked but frustratingly were pegged back for obstruction whilst close to Doncaster’s line. It just wasn’t to be and after a high tackle Robinson stretched the Dons lead to 12 points, too much for a comeback.

On the hooter the Dons took the win 20-32 and look a good bet to do well in the Play-offs. Hunslet however can focus on knock-out football starting a week early at Oldham next week.

Harvey Hallas and Jordan Paga were outstanding with Patrick Walker and Matty Beharrell marshalling the troops and hooker Jamie Greenwood looks a good addition to the squad.

Coach Alan Kilshaw will be pleased with aspects of his sides performance and a win next week could set Hunslet on a late season run, but we are now down to do or die for this season’s Parksiders.