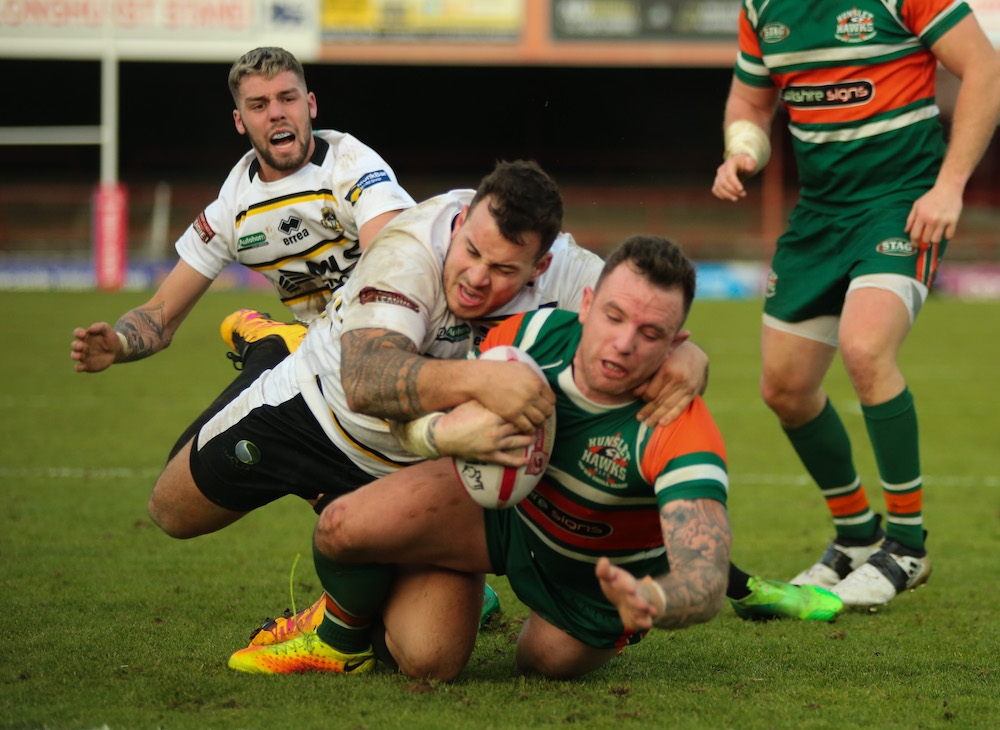 Hunslet RLFC have revealed their first team squad numbers for the 2018 Betfred League 1 season, on the eve of their all-Hunslet clash with Hunslet Club Parkside on Sunday (4 February 2018).

Coach Gary Thornton has named a thirty man squad, with a number of our new signings been awarded squad numbers within the one to seventeen positions.

Photos of Hunslet’s game at York by Steve Gaunt/Touchlinepics.com

Some noticeable changes to the squad numbers see Joel Gibson move from number eighteen to number five after a good first season at the Club. Matt Nicholson is rewarded for a solid League 1 shield campaign with the number thirteen shirt, which sees Liam Mackay take the number eleven shirt.

Club stalwart Jimmy Watson retains the number one jersey with young half back Joe Sanderson been rewarded for a great first season at the club by keeping the number six shirt. Gary Thornton has also announced that fans favourite George Flanagan and new star signing Duane Straughier will be joint Club Captain’s this season.

“George has been loyal to Hunslet for a number of seasons and is a really popular and well respected member of the squad. Geroge has great leadership qualities on and off the field and the guys look up to him. He has great experience at this level and is always helping the young guys in training and during games.

“He is really enthusiastic about next season and that rubs off on his team mates. George puts his heart and soul into every game he plays. He’s the type of player the opposition hate to play against, but love to have on your side.”

On the announcement of Duane as joint Club Captain, Thornton said:

“Since Straff came into the club he has had an immediate effect on the place. He is experienced at a higher level and been at some good clubs and in some good environments. Straff is very professional in everything he does and is well respected within the game.

“He is a knowledgeable bloke and will be a perfect ally for George. With George playing an impact game mostly off the bench, Straff will give us the leadership and guidance we need on the field from the start. Having the two of them in a Joint role will allow them to share the responsibility and work with each other for the benefit of the team.”

Hunslet RLFC had their first run out of pre-season at Bootham Crescent on Sunday 28 January where they lost to York City Knights. The final scoreline of 30-6 did not tell the whole tale as Hunslet kept this to a 6 point game for 75 minutes.

Hunslet Coach Gary Thornton was positive after the match explaining that he’d used this first match to give a lot of different players opportunities through the match, that as a squad they were still getting know each other and get match fit.

Thornton took over the squad in the middle of the last campaign and has rebuilt it over the summer. He has taled about the importance of bringing in players with Championship experience to help the younger players develop and of strengthening the pack.

He was certainly pleased with the way his players approached the game “I thought our initial contact were good and we hit hard today.” George Flanagan scored Hunslet’s only try of the game.

Hunslet moves on to two derby games in a week, both at South Leeds Stadium. On Sunday (4 February 2018) they play Hunslet Club Parkside, now just one rung below them in the top tier of amateur rugby. Hunslet RLFC will be keen to avenge last year’s shock defeat in this fixture. Tickets for the match, which kicks off at 3pm, are just £10, £5 (concessions) and Juniors are FREE.

Then on Friday 9 February they take on the Leeds Rhinos for the Harry Jephson OBE Memorial Cup. Kick off is at 7:30pm.

League 1 kicks off with a visit to Hemel Stags on Sunday 18 February, followed by a home match against Whitehaven on 4 March.

South Leeds Life will be covering every match, but we are still looking for people to join our writing team – especially for away games. We can help you with writing tips, you just need to bring your rugby knowledge. If you are interested in joining us please email: info@southleedslife.com.