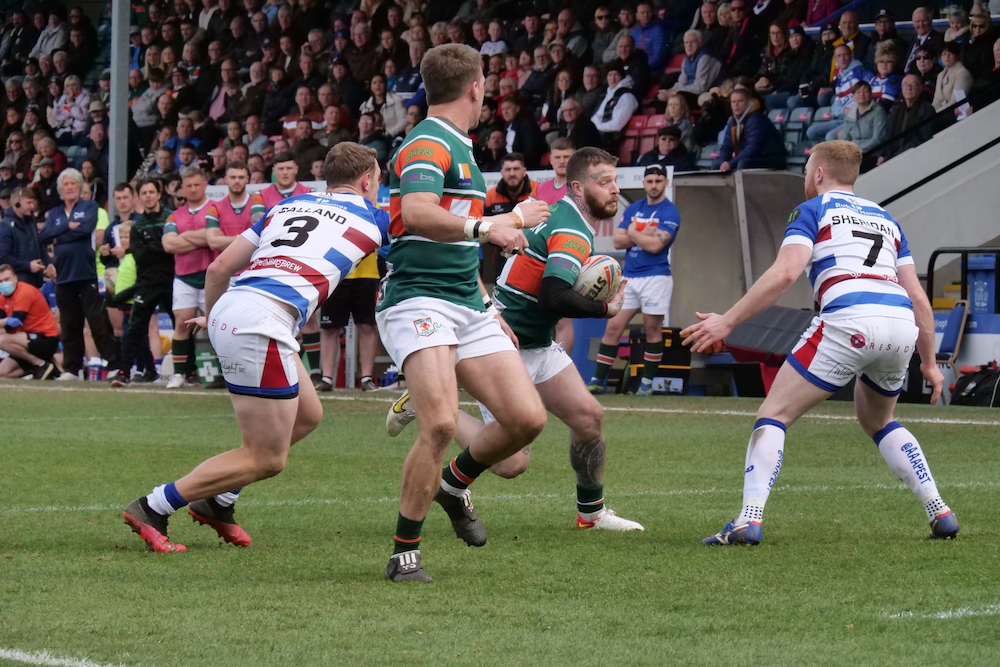 Hunslet’s young side learned some harsh lessons today at the Crown Oil Arena (April 10 2022) as they finished up 44-20 losers to an experienced and mobile Rochdale Hornets side.

Playing a lot of the game without a full complement of players (two sin-bins and a sending off) was always going to be tough against a team containing players of the calibre of Rangi Chase and Fuifui Moimoi.

Still missing Captain Duane Straugheir and influential half-back David Gibbons, the Parksiders started quite well. New signing Kieran Moran made a break after Joe Sanderson’s kick was re-gathered from a charge-down. Hunslet kept up the pressure and eventually took the lead with a Sanderson penalty. 0-2

Although the kick off was miss-fielded and Rochdale put on some pressure Hunslet scored next as Harvey Hallas showed a neat side-step and fed Joe Sanderson who then converted his own try to give Hunslet a 0-8 lead after 12 minutes.

But Rochdale slowly started to come into the game. Rangi Chase forced a Drop out before Paul Brealey was given far too much time to score. Barely two minutes later and Rochdale gave flight to the ball again, this time Chase threw a basketball style pass for Baker to score, and at the quarter point the hosts led 10-8.

There was nothing between the teams, but Joe Sanderson showed a piece of class with an inch perfect kick for Jack Render to pluck the ball out of the sky and score. 10-14 after 25 minutes.

Although Rochdale had a try disallowed for a forward pass they were not disheartened and scored a minute later when an inside ball left Baker room to scoot over for his second try. 16-14

The game was a see-saw match with both teams looking good in attack, but poor at line defence. But after the Baker try Ethan O’Hanlon was sin-binned for arguing a decision. Hunslet were now down to 12 men at a crucial time with 9 minutes to the break.

Rochdale took advantage when first O’Keefe went over on the left, then Sheridan sliced through a large gap to score and extend Rochdale’s lead to 26-14. Hunslet were praying for the half-time hooter to regroup.

The omens were not good at the start of the second half as Matty Stableford was carried from the field after receiving a knock on the first tackle.

Rochdale were on it though, as good handling sent Sheridan through for his second try and at 32-14 after 46 minutes it really was a big ask for the Parksiders.

Hunslet stymied the Hornets progress for a while, but frustratingly after some good defence a loose ball resulted in broken play on the last tackle and Ben O’Keefe got his second try of the afternoon. 36-14 after 56 minutes.

Things were not going Hunslet’s way. Jack Render was unlucky to not score from a Jack Mallinson kick, Wayne Reittie had a try disallowed, Jimmy Watson was sin-binned for an alleged shoulder charge then to cap it all Kiedan Hartley was sent off for bad language.

With Hunslet depleted Hornets took advantage. First McNally intercepted and raced 90 yards to score before Forster burst through a tired defence to put Rochdale 44-14 in front.

Jimmy Watson scored a consolation try from a Joe Sanderson kick, but it didn’t put a smile on his teammates’ faces.

The truth was Rochdale were faster and stronger round the ruck and Hunslet were on the back foot from the quarter mark on. This was partly due to them playing large parts of the game with 12 men. But it’s a learning curve for this team and with a big match on Good Friday at home to Keighley (7.30pm kick-off) they can’t afford to dwell on this result.

The players voted Jimmy Watson as the Hunslet Parkside Ex-players Association Man of the Match and both Harvey Hallas and Joe Sanderson had good games as well as Kieran Moran an excellent debut.