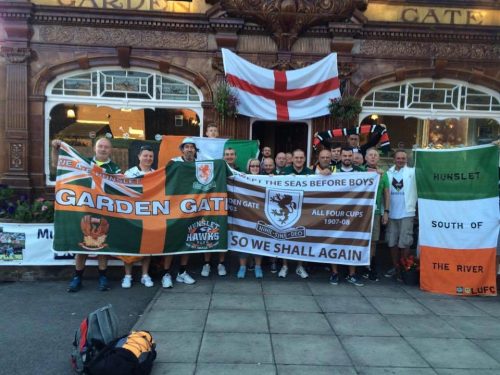 In what was a busy weekend for local people taking on charity challenges (see also here, about the Tour de Northside bike ride), Amanda Binns here tells us about last week’s Leeds to Keighley challenge, undertaken by a faithful band of Hunslet Hawks supporters – via our Create an article for South Leeds Life page.

I have supported Hunslet all my life and have always felt that there is a strong community feel amongst the supporters. It was this community that pulled together to support the family of a long-term supporter following his sudden death. Mark Smith was a loyal supporter of Hunslet and a few of his friends arranged a sponsored walk to raise money to help his family.

The walk was arranged for the day of the game against Keighley – away at Keighley, a mere 21 miles along the canal. The walkers were also joined by a matching pair of runners and a trio of cyclists.

Almost 30 supporters gathered at the famous Garden Gate pub at the unearthly hour of 5.30am for bacon sandwiches and cups of tea, which were provided free. They then set of to walk the 21+ miles along the canal to Keighley. The walkers arrived at around 1pm, plenty of time for a well-deserved pint before the kick-off.

Along the way they were overtaken by the Johnstone twins, Colin and Keith. These crazy boys decided to take the challenge up a notch and run the distance. But even this wasn’t enough for the crazy running twins: they passed the ground, and continued until they had completed a full marathon distance.

Lagging well behind were the three cyclists: myself, Ian Pickles and Phil Hodgson. We had a lovely lie-in before meeting at the former Junction pub on Dewsbury Road at 10am. After a couple of comfort stops (otherwise known as pubs), we arrived with about 20 minutes to spare before kick-off.

To add to the craziness, the three of us also cycled home – bringing our mileage up to around 45 miles. It hurt, a lot! And to add to the torment, I was during the return journey knocked off my bike by a dog. (But it was a slow gentle fall, so I didn’t get anything more than a dirty knee.)

The kind people at Keighley allowed the Hunslet supporters to take buckets amongst the crowd, and this raised over £500 to add to the £2,000 already collected. We’re hoping to top £5,000 for our final total, and the supporters are planning to present the cheque to Mark’s family at the game against Toulouse on 3rd September, at South Leeds Stadium.

Donations are still very welcome: please click here. For more on Hunslet Hawks, including all their forthcoming matches as they push for promotion, click here.