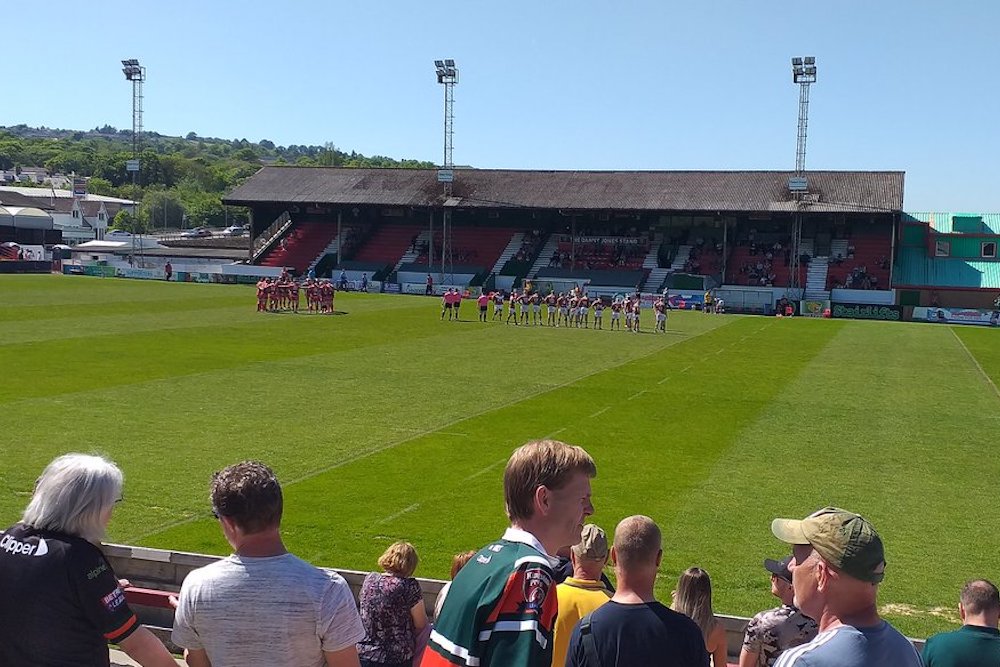 Hunslet’s season went from bad to worse as they took a hammering away to much fancied big spending Keighley Cougars yesterday (30 May 2021).

The Parksiders have a horrendous list of injuries (Including Captain Duane Straugheir, favourite Jimmy Watson, Simon Brown, Kiedan Hartley, Nyle Walker and former Cougar Will Cooke) but with some on loan players they will have been hoping to unsettle a wobbling Cougars outfit.

The game was played in the first real hot weather of the summer and unusually was still 0-0 at the half time hooter.

It was Keighley who had the early pressure though (playing down the slope) and had two tries disallowed in the first ten minutes for handling errors. The home side then bombed a couple of chances, though a lot of that was down to good last ditch Hunslet defence.

On 20 minutes Hunslet had a chance to put on pressure when awarded a penalty, but elected to kick for goal instead (Brambani’s attempt went wide), shortly after Alex Rowe was just held short of the line.

It would be fair to say Keighley had the better of the half as they came close on three more occasions before the break, but with Hunslet playing down the slope in the second half, on-loan players Dave Gibbons jnr and Curtis Davies looking lively and Harry Kidd carrying the ball well Hunslet had some hope.

It was Keighley who came out the better side though and after Hunslet had had the ball stolen in a tackle Moran went over from close range. 6-0 after 51 minutes.

Five minutes later Miller managed to touch down from a smart kick, and now in the ascendancy free flowing football sent Charlie Graham strolling over the line. 18-0.

Although Hunslet had a chance to get back into the game the ball was knocked on with the line begging, and that seemed to knock all hope out of the Parksiders.

Keighley then started to show their quality with an impressive hat-trick from Brenden Santi and another stroll over for Charlie Graham. Jack Miller converting 6 out of 7 goals.

It was a tough defeat to swallow, 40 points scored in 29 minutes is hard to take, but hopefully the return of Jimmy Watson and some of the injured players, and the settling in of the on-loan players may help Hunslet to a winning run starting next week (June 6th) at home to Rochdale.

On a positive note the club have raised £2.9k for MND (Motor Neurone Disease) and SITraN (Sheffield Institute for Translational Neuroscience) including yesterdays ‘Run for Rob’ event where people ran, walked and cycled from Leeds to Keighley.