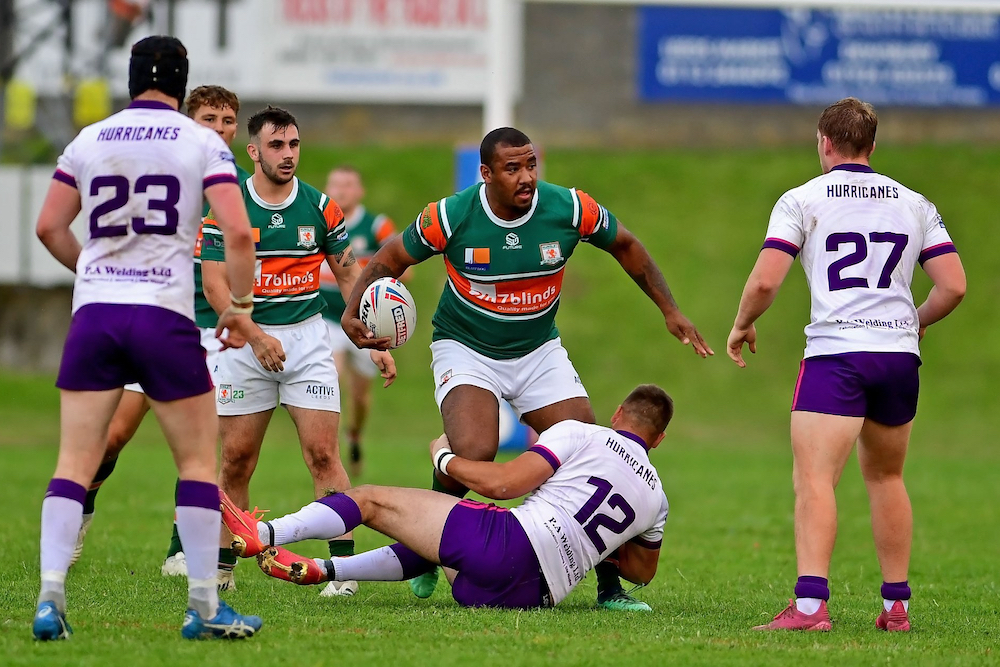 Hunslet’s push for play-off momentum took a huge knock on Friday night (29 July 2022) as a determined and well drilled Midlands Hurricanes outfit tackled the home side off the park and delivered the surprise result of the season.

Hunslet are still favourites to finish 6th and secure a play-off place and will point out they were missing key men in Duane Straugheir, Jimmy Watson, Josh Jordan-Roberts, Joe Summers and Harvey Hallas, but this defeat will be a dent in their confidence.

Many will look at Hunslet’s performance, but this does injustice to Midlands who were superb.

Early on Hunslet’s forwards were on top with both Ethan O’Hanlon and Joe Hird running strongly, but the Midlands defence soaked it up and were unlucky when Ben Stead broke through only to be halted by a great Liam Carr tackle.

The first try came on 20 minutes after Hunslet had fumbled the ball. Tom Wilkinson nipped over from acting half back and Ben Stead converted. 0-6

Both sides were prone to errors, but on 30 minutes quick passing by the Hurricanes meant Wallis could perform a theatrical dive in the corner to score. 0-12

The home fans thought both tries should have been chalked off, but the referee was having none of it.

The half ended badly for Hunslet as strong running forward Sion Jones had to leave the field injured, and Jack Render had to save more home blushes kicking the ball dead from a dangerous Hurricanes kick. Half time 0-12

Hunslet coach Alan Kilshaw had been given a ban and could not be near his players an hour either side of the match or during the game, so the half time team talk was left to Assistant coach Ryan Jackson.

Hunslet came out more determined in the second period and both Jordan Paga and Macauley Hallett went close, but the Midlands scrambling defence was excellent and although Matty Beharrell was busy with ideas Hunslet’s attack seemed flat and one dimensional.

Another blow for the Parksiders came on the hour when fullback Jack Render had to leave the field. Moments later a mistake handed Midlands the ball and an excellent pass put Tyler Walton through to score 0-16

Midlands mistakes kept giving Hunslet chances, and it looked like they had taken advantage as Beharrell broke through and put Liam Carr under the sticks, but the referee frustratingly pulled the move back for a forward pass.

Although Hunslet kept pressing they couldn’t break the Hurricanes defence and a Midlands 40/20 broke the pressure. A penalty soon after for a high tackle was converted by Ben Stead to make the score 0-18 and with only 5 minutes to go it looked like the game was up for Hunslet.

Hunslet’s Man of the Match Ethan O’Hanlon came close and deserved a try for his aggressive running, and former Hunslet man AJ Boardman looked all on to score an interception for Midlands but pulled up with cramp.

The last hurrah though deservedly went to the Hurricanes as Chris Cullimore went over from close in on the hooter to give the visitors a famous win. 0-24

It will be a match Hunslet will have to forget and move on from. Things don’t get easier in a fortnight with a trip to table topping Keighley Cougars. But hopefully some of the injured players may be fit and they have shown this season they can be a match for anybody on their day.

For Midlands it’s probably about next year and their possible move to the Alexandra Stadium in Birmingham.

Hunslet are next at home on Friday 26th August against Doncaster.

Photo: No way through as Peltier and Paga try to break the Midlands defence. Credit: Paul Butterfield