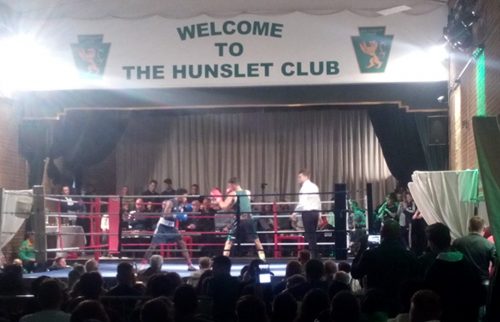 Last weekend (Friday 4 November 2016) saw a busy night of boxing at the Hunslet Club, with the home club making a clean sweep of results, including Beeston’s Ismail Khan seeing off a strong challenge to retain his English flyweight title.

The night featured 14 bouts, in front of a lively and good-spirited crowd of 200+. The boxing featured a wide range of juniors (both girls and boys), as well as several senior bouts, with opponents coming from across the North.

Incredibly, of the nine bouts which were judged, the Hunslet Club boxers won all nine. Special mention is perhaps due to local lad Jack Briggs (12), who clocked up a big win after some difficult previous results. Also to Ismail, who faced a stern challenge from a high energy opponent from Middlesborough, but fought a good technical fight, and was given a unaminous victory. And finally to another senior boxer Jacob Staten, who – in the last fight of the evening – staged a stirring comeback to win a tough bout, and also the Boxer of the Night award.

One of the visiting regional officials, Tommy Devanney, commented:

“What a brilliant show you staged last night. If any club would like to visit a boxing show, I’d say: ‘Go along to Hunslet, we can all learn a thing or two.’ And I’ve been in this game a very long time, but never have I ever seen a team work together so well, with 9 wins from 9 bouts. Well done once again to all concerned at Hunslet Boxing.”

And Dennis Robbins, CEO at the Hunslet Club, added:

“Our team were up against it, but we’ve never had a clean sweep of results ever before – that’s quite an achievement. Thanks to the staff, the club members, the local community, but – most of all – the volunteers. Without them, events and programmes like this – and also the fireworks display (the following night, attended by about 1,000 people) – would never happen.”

For more info on the Hunslet Club, including their boxing programme, and a wide range of volunteering opportunities, click here.