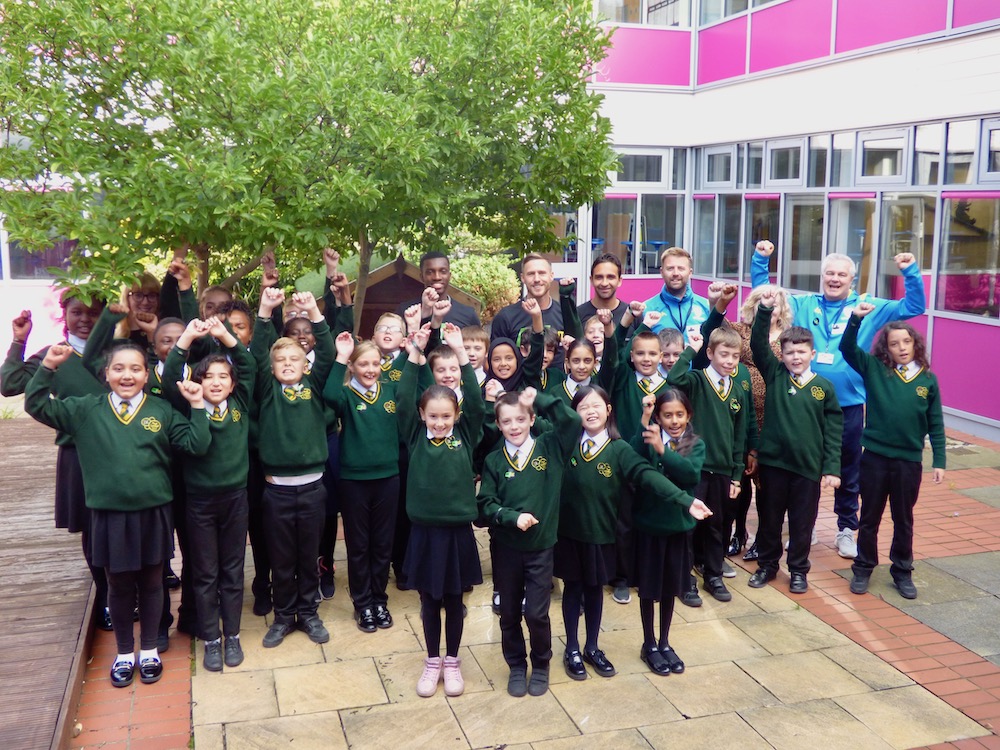 “Everyone has the perception that football training is just about a bag of balls, but actually that’s a tiny part of what we do. We look at life skills: communication, self esteem, even Maths and English.

“We also work with the teachers to give them skills they can use in PE lessons.”

As well as time on the field, each weekly session will have a classroom element. There will also be a competition with other schools.

In a session led by Kick It Out, English football’s equality and inclusion organisation, the children discussed different forms of discrimination and role-played what to do it about it.

“We’re a diverse school and very unique within the city with representation from almost every country in the world. We want to celebrate our diversity and it’s important for us to teach the students about tolerance and respect throughout the school.

“We’ve had Leeds United players in today and it’s been important for the children to see that Leeds United are supporting the Kick It Out campaign, it really makes what we’re teaching them in school come to life.”

The children got a chance to ask Eddie and Barry questions. Here are few of their answers:

Q: What makes a successful footballer?

BD: “He or she’s the one that worked harder than the others, stuck to it, never gave hope even when they had set backs. It applies to you guys too. You’ll suffer certain setbacks but you need to keep going. If you want something, go for it.”

BD: “It’s good when you play good, but when you don’t everyone gets to see it. But that’s part of the job, entertaining everyone else, it’s nice to give that back.”

Q: What’s the best thing about being a footballer?

EN: “For me it’s the fact that you’re able to do the thing you love as a job, everyday.”

Q: If you miss a goal does the manager shout at you?

EN: “You’re upset because you want to score, but the team pulls together like a big family and it looks like you guys are together and all getting on. If you have that support behind you and you have a set back you can keep keep learning.”

BD: “You’ve got to encourage each other, like what you’ve been learning today about being kind to each other. That’s one of the things that we can take into football – if someone misses a chance you need to encourage them.”