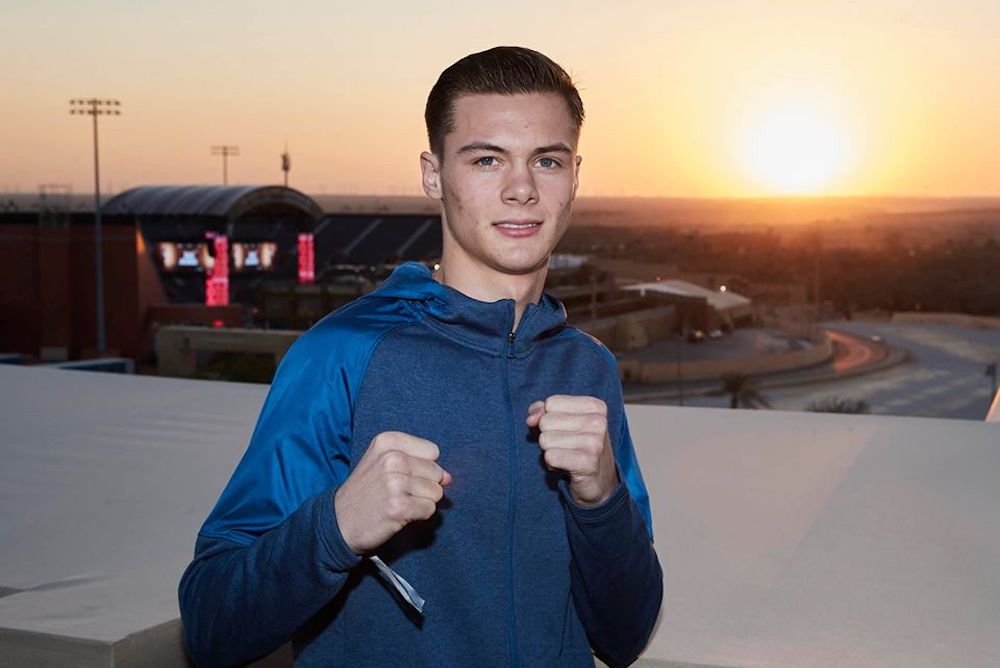 In December 2019, the eyes of the boxing world turned to Saudi Arabia as British heavyweight Anthony Joshua faced Andy Ruiz Jr. in what was billed as one of the biggest rematches in history.

But going about his business quietly and no less professionally that night was a young boxer from Leeds fighting in only his second professional bout: Hopey Price.

On the biggest stage he had ever experienced, Price recorded a third-round stoppage victory against Swedi Mohamed and extended his unbeaten record as a pro to 2-0.

Three months later, Price was back where it all began as he attended the Hunslet Club’s annual amateur boxing show.

Despite tasting the glory and glamour of the professional boxing scene, he has not forgotten his Hunslet roots.

The featherweight boxer is now coached by Dave Coldwell and fights with Matchroom Boxing, a promotion that boasts some of the sport’s biggest names, including Katie Taylor, Josh Warrington and Anthony Joshua.

In 2018, he won a gold medal at the Youth Olympic Games in Buenos Aires, becoming the first British athlete to achieve the feat and adding more silverware to an already successful amateur career.

Two men who accompanied Price on his journey to stardom were the Hunslet Club’s Tony Nixon and Paul Savery, who coached him from the age of 10.

“He was always very talented. But he actually lost quite a few bouts to start off with,” recalls Nixon.

“It took quite a bit for him to click and get his style. It took us a bit of time to get him to do a little bit more work. His footwork was always brilliant but he never did enough.

“He always had potential and a great style. It was just [about] developing that style, not just myself but all the coaches we’ve got here.”

However, the early setbacks did not deter Price from forging a path to the top.

“He always looked a prospect and a tidy boxer. He progressed, got more confident and started winning a few [bouts],” says Savery.

“You could tell that he had it in him to become something. His attitude was just fantastic.”

Outside the ring, Price has shattered stereotypes around people of Gypsy background, describing the discrimination Gypsies face as “the last acceptable form of racism” after ‘The Gypsy King’ Tyson Fury defeated Deontay Wilder in their much-anticipated rematch in February.

Nixon and Savery were part of a wider coaching network that guided the 20-year-old, including Darren Rhodes, an ex-amateur and professional boxer, and his family.

“Eventually kids develop their own styles. He’s got a very unique style which is hard to beat. He’s developed that along the way,” Nixon explains.

“His dad has coached predominantly with him in later life. He still works a lot with him, along with his younger brother Ellis, who’s going to be a world star as well.

“He’ll come down and do a little bit with his dad and his brother. The whole family are a really nice family and they work really, really hard.”

“You get to a certain age when the kids just develop their own techniques,” adds Savery.

“We can show them the basics and a few things here and there, but they develop themselves as they get older. As a team we all chip in.”

Price was due to fight again on 24 April 2020 in Doncaster, but the coronavirus outbreak has forced Matchroom Boxing to postpone the event.

Although it is unclear when Price might fight next, Nixon and Savery have no doubts about his world-class potential. Could he become a world champion one day?

“Without a doubt,” replies Savery. “With the right people, he can go all the way. He’s done a Youth Olympic gold, which no one’s ever done before.

“He’s with Eddie Hearn and he’s said he’s going to guide him to where he wants to get him.”

“Hopey can go all the way, no doubt about it,” Nixon agrees. “He’s developing all the time and it’s still about his willingness to learn all the time, even though he’s got so far as it is.

“That’s the key to it: working really hard. It’s about attitude and the will to win.

“People have natural talent but it’s about if they can actually work hard to get to the top.

“It’s just his time. Over the next couple of years, he’ll win a world title.”