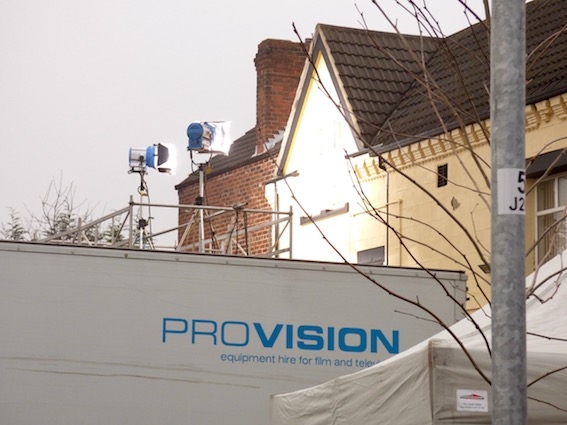 Stars Maxine Peake, Jim Moir (aka Vic Reeves) and John Bishop were at The Holbeck today as the club became a film set for the day.

With the car park full of trucks and a lighting rig by the front door, the club was used by the makers of a new British film called ‘Funny Cow’. The film has been written by Sheffield-born Tony Pitts, a former stand up comedian who co-stars in the film.

Maxine Peake spoke briefly to South Leeds Life explaining that Funny Cow is “a ‘hard-hitting’ film about a female comic trying to make it on the 1970s northern club circuit.”

The concert room upstairs was ‘dressed’ to look as it would have done in the 1970s – ruched stage curtains, Phoenix Tower labels on the beer pumps, Double Diamond ashtrays and all. The film is due to be released in cinemas later this year.

The club will receive a fee for the filming and the producers have also made a donation towards the costs of removing asbestos in the cellars, which the club is currently undertaking. The historic venue, one of the oldest surviving Working Men’s Clubs in the country, was saved from closure by volunteers in 2013.