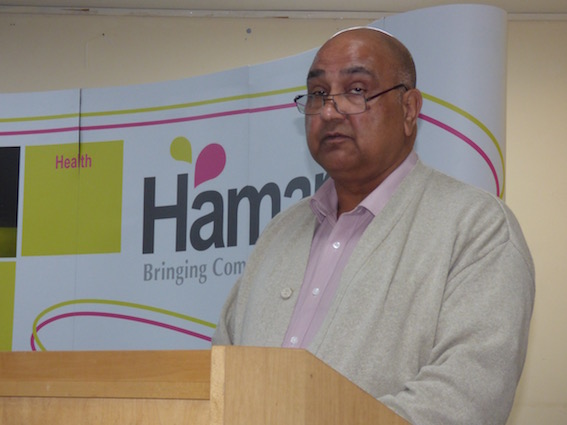 Beeston’s Hamara Centre launched Forget Me Not – its new dementia service at an event on Thursday (14 July 2016).

Addressing the meeting Hamara’s Chair, Mohammed Farouk, talked about the personal experience of a friend that encouraged the organisation to provide the new service.

“Dementia closes down families and isolates people, it’s important that we offer support to families.

“My friend was a successful senior manager, but the strain of looking after his mother, who suffered from dementia, led to the break up of his marriage. He took time off work to care for his mother and eventually his GP referred them to a dementia support group. He’s now getting his life back together and is working part time.”

Arshed Lodhi who is co-ordinating the service explained that there are many types of dementia. Some are reversible, brought on by stress, trauma, or poor diet; others such as Alzheimer’s disease is not. Hamara’s services will be focussing on the former.

The service echoes back to Hamara’s origins twenty years ago, providing culturally appropriate services for Asian elders. But as well as doing that, the new service will support all sections of the Beeston community.

Tuesday’s will see the continuation of the ‘Recycled Teenagers’ group, predominantly aimed at the indigenous white community. Thursday’s group will be aimed at Asian elders and Wednesday’s sessions will be mixed. Arshed stressed that anyone was welcome at any of the sessions.