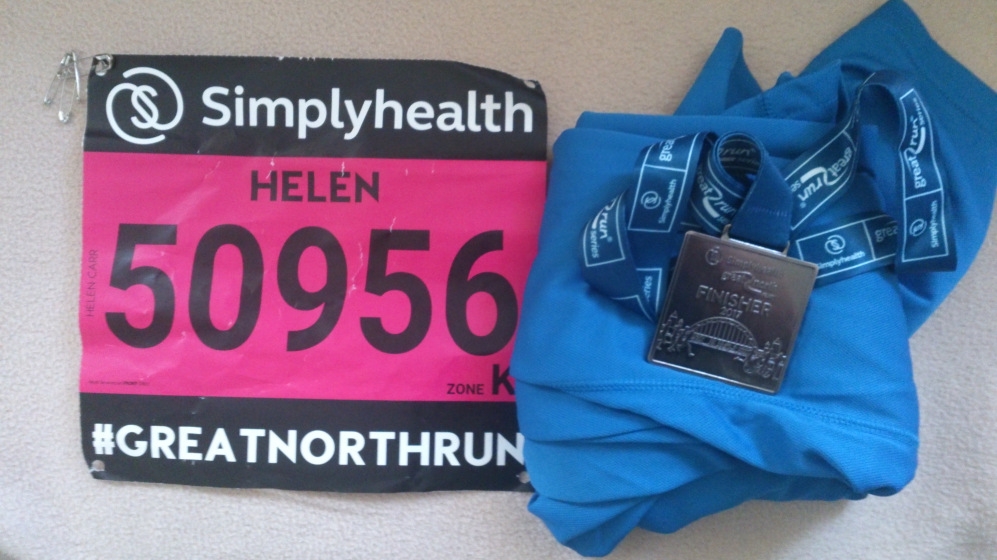 I did it! I completed the Great North Run! It is the best thing I have ever done. Even more so because I reconnected with family. It’s a strange thing is social media. But thanks to Facebook, over 17 years ago when I reconnected with one cousin via a friend and then more family connected over the years, I have finally been able to see family who we had lost contact with due to my Dad.

This weekend has been incredible. In fact the journey leading up to it. I was intending to run the Great North Run last year but due to becoming unemployed I just couldn’t afford to and I wasn’t in the right mindset. Saying that, this year I have a job, but have been doing evening work and long shifts, so motivation to get out to train has been very low. The one thing I have been grateful for is parkrun and being lucky having the odd Saturday morning free. Yes it may only be 3.1 miles but it was something and it got me going. I just found this year I was working long shifts and then finding I wasn’t getting the right amount of sleep or too much therefore the motivation to get up or to go out just didn’t appear and I never made it past 6 miles in training. The one thing I did manage to keep on track was my diet and I’ve seen a massive change and I’ve managed to lose at least a stone and a half since Christmas. I’m so proud.

So, Sunday came around quite quickly. I stayed at my cousins on Saturday night and slept quite well. On the morning my cousins, Andy and Steven and I travelled to Newcastle via the train and a breakfast stop of bacon sandwich and walked to the start.

So I was in pink, my cousins were orange and white. My two cousins went in the line up together as I walked to the back. I probably could have joined them, but felt knowing my luck I’d get noticed and end up at the very back and goodness knows what would happen. Anyway I felt I could not keep up with either of them as one had done a lot of training and the other, apparently not as much, but is a lot taller and I’d have had to run twice as fast to keep up so I walked to my pen, and found I had an extra mile to walk back to the start. oh dear.

I have never experienced anything like it. I thought it would be the same as the 10k’s just on a bigger scale, but it was so much more. I spotted a couple of people also in Cystic Fibrosis tops like me and I was amazed at how much support we were giving each other. Not only that just everyone in general. We were all nervous standing around and jokes were made and everyone shouting good luck as we finally set off.

While I had been standing around, I found that Strava couldn’t pick up signal and wouldn’t even start, which meant I couldn’t track my pace etc. I took it as a sign it wasn’t important and that with the chip on my number I would have a time at the end and that’s all that counted. I decided I just had to do it and enjoy it. It’s the first time I’ve ever fully just absorbed everything. Being aware I didn’t know the course fully, even with going through the walk through online, I was still quite surprised about the hills, the long inclines. Yet at one point I just thought, ‘Thank goodness for Cross Flatts Park and those hills!!!!”  They actually did me the world of good training in that park. Yes I walked some bits of the route but I mainly ran and managed to keep going on the last mile to complete my first half-marathon and one that I grew up watching.

So with that said, it was an amazing journey. The support by the crowds was amazing. Running thought the tunnels and everyone shouting ‘Oggy’ and the response everyone gave made me feel I was never alone. All I kept thinking was, that I had to keep going, I couldn’t leave my cousins waiting too long, but on the other hand I just wanted to enjoy the run. At around mil 8 or 9 there were showers, or sprinklers in a tent, which you could run through which really helped. At mile 10 my legs started to hurt, but then more water and ice pops were handed out and I think the sugar helped.

When I realised I was on the last stretch I had an urge to push forward but knew if I did I wouldn’t finish without having to walk. My body was reacting and I knew I had to slow it down. And then I was on the seafront, the last stretch. I kept telling myself ‘you’re nearly finished, you can do this!’. Funniest bit was I had seen a woman dressed as a post box a bit further back, and had said hello, only for her to come flying past at the end. But I finished, I made it! I threw my hands in the air and I celebrated.

I collected my water, followed by my goody bag and then onto the medal. I bloody did it!

After that I tried contacting my cousin, found I had difficulty with signal, but finally got the instructions where to meet. I went over thinking I was going to see both cousins, but no just Andy who had finished first with an amazing time of 2 hours and 5 minutes (I think) to tell me I had beaten Steven. I was in utter shock. Turns out he had stopped at Tesco’s for food and had a couple of pit stops. I was in shock, I didn’t think that I would catch either of them or beat one.

So before the big day, you are able to sign up for a text service to get your results and also use an app that people can use to follow you. I didn’t realise how good the app was until I saw my pacing and the fact you can track how you did even after the race, so I was able to see how Andy and Steven did. When I got the message through about my time, I just couldn’t believe it. It was far better than expected. I had worked out what time I could possibly get and I thought it was more near the 3 hour mark and not what I got. It still hasn’t quite sunk in, see below……

I have to say  a big thank you not only to my cousins, but also to my Mum and Sister. I stayed with them Sunday night, I travelled via bus to theirs and when I got there still in gear, my Mum insisted I get a bath first then have some food. While my Mum sorted the bath my Sister ended up helping me get my tutu and leggings off as I just couldn’t seem to do it. I just want to say thank you to them for their support it made a good end to a fantastic day!

So on to post exercise, yesterday I walked in town and back and today, after some good advice I tried to go for a run. I have to say, although it was a 5k with a bit of walking, it’s amazing the difference doing the half has done to my running. I felt stronger and taller. Can’t wait for the full recovery and try longer distances. Yes there will be more races, hopefully the Great North again, that’s a least one birthday present sorted. Along with some 10k’s, I’m hoping Norwich, Darlington and Durham. And of course not forgetting some parkruns. I have now got up to 14. Lets see if I can at least double that in the next year.

This post was written by Helen and first appeared on her own blog: hellofrommetoyou.wordpress.com/

Since writing it, has Helen has achieved at new PB (personal best time) at Cross Flatts Parkrun.