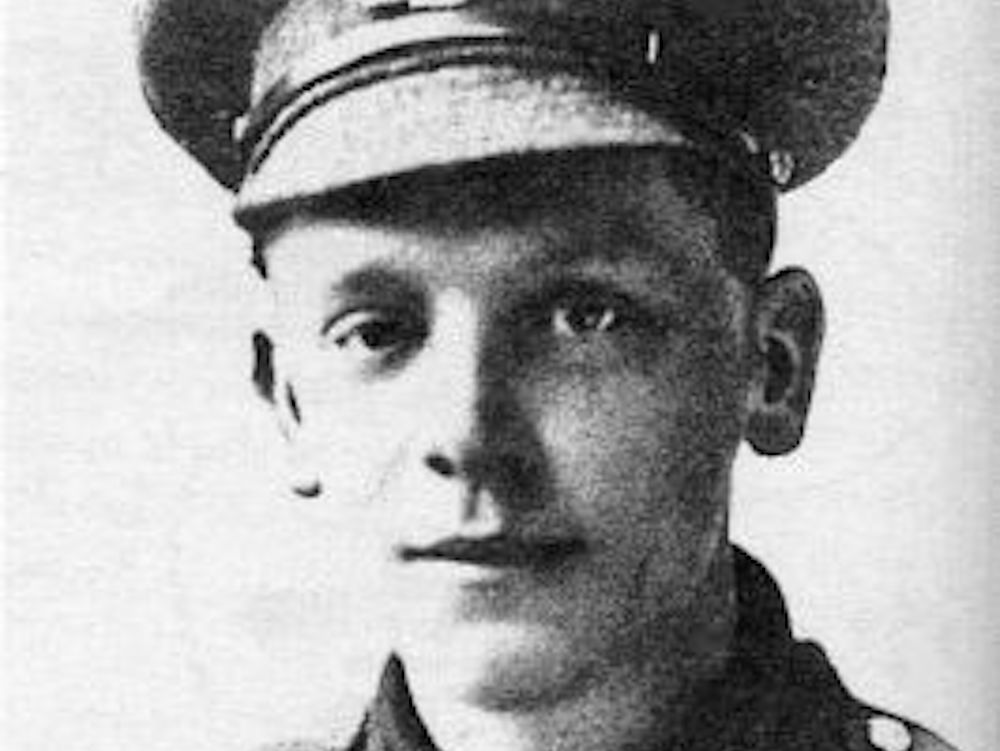 Leeds 11 was, and still is, essentially Holbeck and Beeston. It had been a prosperous area during the 19th Century, with a lot of manufacturing, including John Marshall’s Mill and Matthew Murray’s Foundry, but by the beginning of the 20th Century it was starting to decline, and it has taken most of that century for recovery to start. Nevertheless it provided a good number of volunteers for the Pals, equalling Woodhouse and coming third on the list.

One of those volunteers was Edward Woffenden. His younger brother Tom volunteered at the same time but ended up in the 10th Battalion, while Harold, the eldest, joined the Pals halfway through the war, and was the only one of the three to survive.

Edward Woffenden was born on 18 May 1894 in Dewsbury, where the family was living, in the parish of Hanging Heaton. The family at this point consisted of Albert Edward Woffenden, originally from Glossop, a lithographic printer, who had married Mary Eliza Dawson in Dewsbury in September 1885, and their first child, Harold, born in 1890. He was followed three years later by Tom, and then Edward. A daughter, Lettice May, followed two years after Edward. On the 1901 Census they were living at 3 North Street, Dewsbury, and Mary Eliza was recorded as having been born in America, though of British parentage.

By 1911 they had moved to Leeds, to 4 Linden Grove, off the Dewsbury Road, possibly around 1904, and were still there at the end of the war.  Harold had followed his father and become a lithographic artist, Tom was a bank clerk and Edward an insurance clerk. Lettice, at 14, was still a student, all of which suggests a quite prosperous and well educated family. Tom and Edward, at least, attended Cockburn High School in Leeds.

War was declared on 4 August 1914, and recruiting for the Leeds Pals began exactly one month later. Among the early volunteers were Edward and his brother Tom, though Tom ended up in 10th Battalion, also Kitchener Volunteers. For the first few months the volunteers were listed alphabetically, meaning that Edward, though there on the first day, was given the number 1003. He was put into C Company, where he ultimately became the section bomber, or grenade specialist.

Basic training was at Colsterdale, then Ripon and finally Fovant, before being shipped off to Egypt to guard the Suez Canal. Sailing from there to France in March 1916 they prepared for the Battle of the Somme. Edward was lucky and survived this battle, but not the Battle of Arras the following year.

On 3 May 1917 the Battle of Arras began, with Pals being tasked with capture of Gavrelle. But the Germans were ready for them, and they suffered heavy casualties, one of whom was Edward. His brother Tom had been killed just under a month before, on 13 April. Neither body was found, and both men are remembered on the Arras Memorial. They are also named on the Cockburn School Memorial. Tom had married Annie Elmy in April 1916 but there is no suggestion that Edward had married.

Edward did, however, keep a diary, officially an illegal act. The worry was that the enemy might find a diary if the men were killed, wounded or captured, and learn useful information from it, but large numbers of men managed to keep one, and keep it hidden. Edward’s diary provides a lot of day to day records of the Pals’ activities, and casualties, and is much quoted in Laurie Milner’s book, ‘Leeds Pals’. One such entry records the defection of a German soldier.

“German crawled in from No Mans Land and gave himself up. Told us about 3 missing men being prisoners. Sleep. Fetched water. All the dead brought to Basin Wood. 9 of ours and 3 Germans. Making temporary stretchers to carry them to Cemetery near Sugar Refinery. Carried rations from Euston Dump to ‘D’ Coy HQ down trenches. Sgt Kirton and Pte Harrison ‘D’ Coy brought in dead. Also 2 Germ dead. Sgt Newborne died of wounds in hospital making 12 dead. Letter from Bert.”

This was a period of relative inactivity, and these deaths were just ‘normal wastage’.

After the war Edward was awarded the 1914-15 Star, the British War Medal and the Victory Medal. Harold, the one survivor, was discharged to Class Z on 23 May 1919, having joined the Pals sometime after 1 September 1916.

This post was written by Peter Taylor and first appeared here on the Leeds Pals Volunteer Researchers blog.

The blog presents the research of a group of volunteers recruited in 2014 to undertake historical research into the story of The Leeds Pals.

The volunteers who have contributed to this blog are part of a joint research project between Leeds Museums and Galleries and Nidderdale Area of Outstanding Natural Beauty’s (NAONB) Heritage Lottery Funded First World War Centenary project.