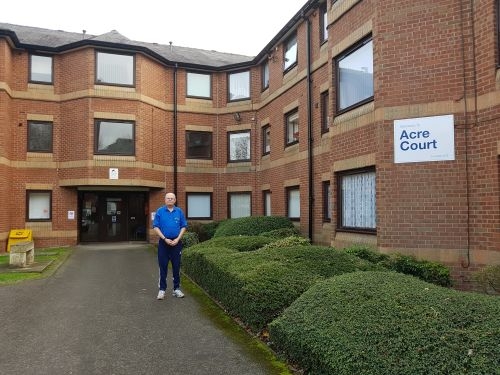 17 September marked two years since I moved to Acre Court, in Middleton. So I thought would have a catch-up, what’s happened over that time.

I came back to live in Middleton after living in Belle Isle for four years, in sheltered housing, run on behalf of the council by Belle Isle TMO. Prior to that lived on Middleton Town Street.

Town Street was a lovely place to live and from the lounge you could see the park footpath leading to the golf course one way and the other the park.

Although I moved from Belle Isle, I still have many friends in Belle Isle and meet many still at Belle Isle TMO’s GATE centre. We have walking groups and Julie runs the Ancestry Group on Mondays.

Lets get started on my two years back in Middleton at Acre Court.

I moved back to Middleton as it looked at the time like I would lose my driving licence due to my dementia.

The move would mean I would be near the shops, doctor, dentist and Middleton Park, so I would not need my car, if the licence was taken away from me.

As it turned out Dr Lance Middleton (my Psychiatrist) contacted the DVLA and told then I was still OK to drive. So that is fantastic news, I need car to help in my volunteer work. My licence is renewed every year and on the OK of Dr Lance Middleton, and I am allowed to drive for another year.

Acre Court, where I now live is a centre of around 40 flats of different sizes for people aged over 60. The flats can accommodate single people or couples. There is even a 3 bedroom house, which I believe at one time the Manager/Warden lived in. The landlords are Housing 21, and the Manager is Alison.

The centre has its own launderette, communal lounge, where bingo is played three nights a week. We have a hairdresser, who also does men’s hair, and we have a lovely garden overlooked by the lounge.

Since the move I have met some lovely people at the Court, and will often bob into the lounge to speak to some of them after a night out.

At times lunches, breakfasts, Sunday dinners and afternoon teas are provided by Margaret Bingham and the Ciaran Bingham Foundation Trust volunteers at the Court. I have not made use of the meals, but you never know, maybe one day.

I’m more likely though to have lunches at Middleton Elderly Aid across the road from me, as they have lunches four days a week, pie and peas once a fortnight and breakfast on a Saturday, followed by Bingo and Hoy.

Speaking of Middleton Elderly Aid (MEA), shortly after moving I made myself known to Samantha, the Manager at the Centre) and asked to be a member. The centre is for the over 60s and their carers. It is run by staff and volunteers, of which I’m one. It must be the biggest and best centre of its type in Leeds, due to the amount activities going on there.

I’ve mentioned lunches, add to that monthly trips out and holidays once a year. In 2018 we went to Llandudno and in 2019 we went to Weymouth.

A day trip from Weymouth was to Poole Harbour. We were shown Harry Rednap’s house and Michael Portillo’s house. Although we did not see it, the great Yorkshire cricketer Geoff Boycott has a home there too.

When I made myself known to Samantha, she asked me a few things about my hobbies and what I do in my spare time. I told her I do quite a lot of volunteer work mainly at Belle Isle TMO, and write blogs and news arcticles for South Leeds Life.

I went on to tell Sam that I started a walking group at BITMO, on Mondays. It’s now into its fifth year.

Now in my 70th year, I have taken a backward step from BITMO’s walking group, and now BITMO only contact me if they need a group leader.

I also go to the BITMO events, and do editorials for South Leeds Life and take photos.

Anyway back to MEA, Sam asked if I would start a walking group with them, similar to the one in Belle Isle, I said yes of course. After taking a First Aid course, and showing Sam my DBS Police check, everything was put in place and the group meets and walks every Wednesday at 11am for members and their carers.

The group has around 12 members, and at any one time we can have up to 10 of us out on a walk. Our favourite walks are into Middleton Park. The walking group has now been running two and a half years. I applied for a grant to buy things for the group, we now have some lovely t-shirts and water bottles for the group.

Samantha has put plans in place to buy watches and mobile phones for the group, where they can tot up how many miles they’ve walked and how many calories they’ve burnt.

I also told Sam about a memory cafe I set up at the Parnaby Tavern for people who like me have Dementia, Alzheimer’s, or just have memory issues. Sadly I no longer run this cafe, but still in place once a week. Sam asked if I could start one at MEA, of course again I said yes.

The memory cafe is on the last Wednesday in the month at the centre. We have people from different organisations come to talk to us and there are drinks and cakes. I think this is the best Memory Cafe in the city. There are many, but I’m biased.

During the year I changed the News Cafe I run for South Leeds Life from BITMO to Middleton Elderly Aid. This is held every Wednesday from 9am at the centre, for two hours. It made sense as it would be easier for me if the News Cafe was close to home. If you’ve got a news story, pop in and tell me about it.

Over the last two years have still had health issues. In December whilst on holiday in Blackpool I had a serous internal bleed and ended up in Blackpool Hospital for four days. I was discharged from the hospital in Blackpool and put in the care of the LGI, where I had an operation to sort me out. It turned out to be a cancer scare, but I’m now OK. That’s the second scare in two years.

I’m determined to go on holiday every 6 weeks. Since December I have been to Blackpool three times, to Weymouth and on day trips with Middleton Elderly Aid.

I have a Physiotherapist who comes to visit me in my flat once a month and gives me exercises to get my knee in better condition. It certainly saves me going to the St George’s Centre.

Well that’s about it, I’m enjoying life with my new friends at Acre Court and Middleton Elderly Aid, where Samantha has given me her support when I was a bit down. Thanks also to Walter, Mavis, Christine and anyone may have forgotten at MEA. I still, of course, keep in touch with my old friends at BITMO’s GATE.