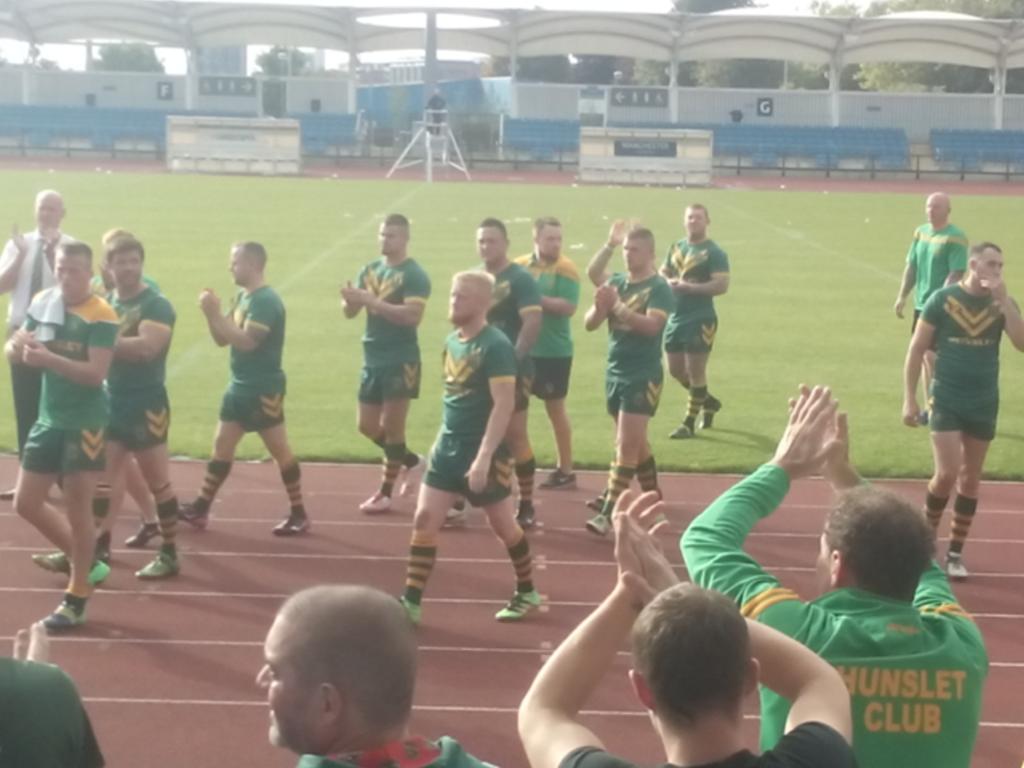 Hunslet Club Parkside suffered a cruel last-minute loss in the Conference Challenge Trophy cup final in Manchester last weekend (Saturday 8 October 2016) – but it was a gutsy performance from a club with a bright future ahead.

Parkside – part of The Hunslet Club – came into the game (the finale of the top amateur Rugby League competition in the country) with incredible momentum. They only formed as an adult club in 1999, yet have steadily risen through the ranks, have just won successive league titles in the National Conference third and second divisions, and – against all the odds – beat Leigh Miners Rangers (the 2015 cup winners, and 2015 Premier League champions) 24-22 away in the first round of this competition.

Yet high-flying Rochdale Mayfield are one of the top amateur clubs in the country, this year finishing the National Conference Premier League in fourth place – so Hunslet were undoubtedly the underdogs. But could they pull off another giant killing?

The match – at the Manchester Regional Arena, in the shadow of the Etihad stadium – kicked off in bright sunshine (a novelty in that part of the world!), with a lively 1,300-strong crowd roaring their teams on. ‘Yorkshire’ and ‘Hunslet’ rung out from the terraces, drum beats filled the air.

A slightly cagey start – almost inevitable for a cup final – saw Rochdale kick a penalty on 4 minutes, then Hunslet cancelling it out with their own, from the boot of Jamie Fields, 3 minutes later. (2-2.) The lighter, faster Rochdale team seemed to be gaining the upper hand with some penetrating weaving runs, forcing Hunslet into some deep defending – but some hard tackling from players including Andrew Hullock and Michael Waite kept them at bay.

Slowly though, the physically bigger Hunslet started to assert themselves, with some heavy running – especially from the ever-present Jamie Fields. And they eventually broke the headlock in the 17th minute with a high kick into the corner, expertly passed on by Kieran Murphy, and gathered up by Josh Murphy to run into the right-hand corner. It was too far for Jamie Fields to convert, but Hunslet led 6-2 for now.

It wasn’t long before Rochdale hit back though, putting their fast feet and neat handling to good use, and opening up the Hunslet defence and running a try in under the posts on 21 minutes. Converted, Rochdale now led 8-6.

Momentum rocked back and forward, with Hunslet putting in a couple of surging attacks, and hustling Rochdale to prevent them building pressure – until the 30th minute, when (accompanied by a brawl, one of several during the match) Hunslet’s Craig Miles found himself sin-binned for 10 minutes, for high tackles.

Predictably, Rochdale increasingly controlled play as half-time loomed, although Hunslet seemed to be soaking up the pressure. But a lapse in concentration and energy from Hunslet saw Rochdale break through for a second try near the posts, then convert it, to lead 14-6 at half-time.

Surprisingly perhaps, Hunslet immediately reversed the momentum of the end of the previous half after the break. Focused and strong, they were over the line within 2 minutes, via Jack Carville. A conversion from Jamie Fields saw Hunslet very much back in it, only 14-12 down. And they nearly added another try almost immediately, but were just held off by desperate Rochdale defending.

A further brawl saw Hunslet’s Craig Miles sin-binned again – but crucially, one of the Rochdale wingers was red-carded at the same time; and just minutes later, another of their players was sin-binned. Rochdale were looking ragged, and Hunslet pushed on. Jamie Fields added another penalty kick to level the scores at 14-14; then Hunslet’s Omar Alrawi added a third try on 54 minutes, again converted by Jamie Fields. 20-14 up, they looked like they were cruising.

But Rochdale picked themselves up, and started playing a patient, territorial game. Some ill-disciplined play from Hunslet (arguably not helped by overly-rigorous refereeing) saw Rochdale awarded two penalties – both of which they converted, to claw themselves back to 20-18, and set up a nail-biting finale with 10 minutes to go. The tension rippled around the stadium.

Hunslet found themselves playing deep in their own half, and struggling to break out – but seemed to be doing just enough to keep Rochdale at bay, successfully running two penetrating Rochdale breaks into touch. But then, with just 2 minutes to go, a high and deep Rochdale kick saw a moment of turmoil on the Hunslet tryline, followed by a breathless pause as the referee and touch judges consulted, followed by uproar as Rochdale were awarded the try. Adding the conversion, they now led 24-20.

There was time for one final desperate Hunslet push, and they nearly pulled off an astounding comeback try –  but mishandled it in the final metres, and lost possession. With Rochdale now assured of victory, they booted the ball into touch, and the Hunslet players sank to the floor at the final whistle. It wasn’t quite the fairytale ending to their remarkable season – but the Hunslet players had once again shown why the club is enjoying such a meteoric rise, and given a glimpse of the great things that hopefully lie ahead in the coming years.

“This was the biggest occasion our club’s ever had, against an established and well-drilled side – and the lads were fantastic, playing with heart and soul. Discipline could have been better, but we enjoyed ourselves, we learnt a lot – and congratulations to Rochdale. Huge thanks to all the fans, not just for this final, but throughout this amazing season we’ve had. Rugby league at the Hunslet Club is bouncing, we’re going from strength to strength, and we look forward to the challenges ahead.”

For further info on Hunslet Club Parkside, click here. The club is always open for new players (of all ages), coaches and volunteers, and sponsors.