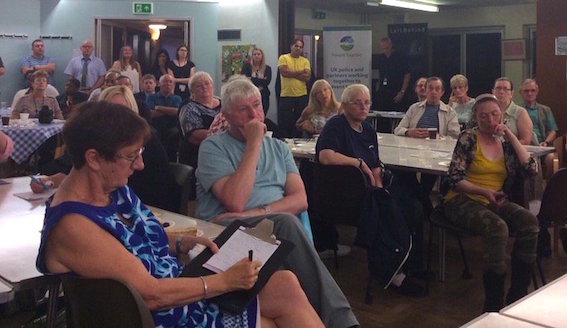 One of the biggest issues was the riding of illegal motorbikes and quad bikes around Middleton. One lady said she and her mother were terrified as they often ride on the pavements, but was too scared to report them.

She was reassured that the Police wouldn’t divulge her details and that you can report anonymously to Crimestoppers on 0800 555 111. You can also report incidents to your Councillors who will pass the information on.

The meeting was organised by the Inner South Community Committee and gave residents a chance to put their issues and questions directly to officers from the Police, Victim Support, Leeds Anti-Social Behaviour Team and Stop Hate UK.

The clear message from all these agencies was “please report every incident”.

Sgt John Pickard explained that the days when police were able to respond immediately have gone and now they use intelligence from the community and patterns of reported incidents to try and put their stretched resources in the right place at the right time.

Many residents complained of long waits, 20-40 minutes, when they rang the 101 number.

There are two online options when you can’t get through on 101. You can complete an online form to report the incident or take part in a ‘live chat’ – a typed conversation with an operator.

Another issue raised was the alleged rehousing of a sex offender close to a primary school. The agency responsible was not present but Chair, Cllr Angela Gabriel, promised to find out who was and ask them to attend the local tenants and residents meeting.

It was confirmed that new CCTV cameras with number plate recognition capability are to be installed in the Middleton area.

On the question of prostitution and the managed approach in Holbeck, Martin Dean from the Council explained that a large scale survey of residents in Holbeck had been completed over the summer with about one third wanting the scheme stopped, one third happy with it and one third wanting changes to how it operated. Officers are now working with the Police to review the details of the scheme. He stressed that the main point of the approach was to move soliciting away from people’s houses.