Vastint’s plans to create a city park surrounded by offices, retail and housing on the site of the former Tetley Brewery in Hunslet took a major step forward yesterday (Thursday 12 October 2017) as Councillors backed their application for outline planning permission. 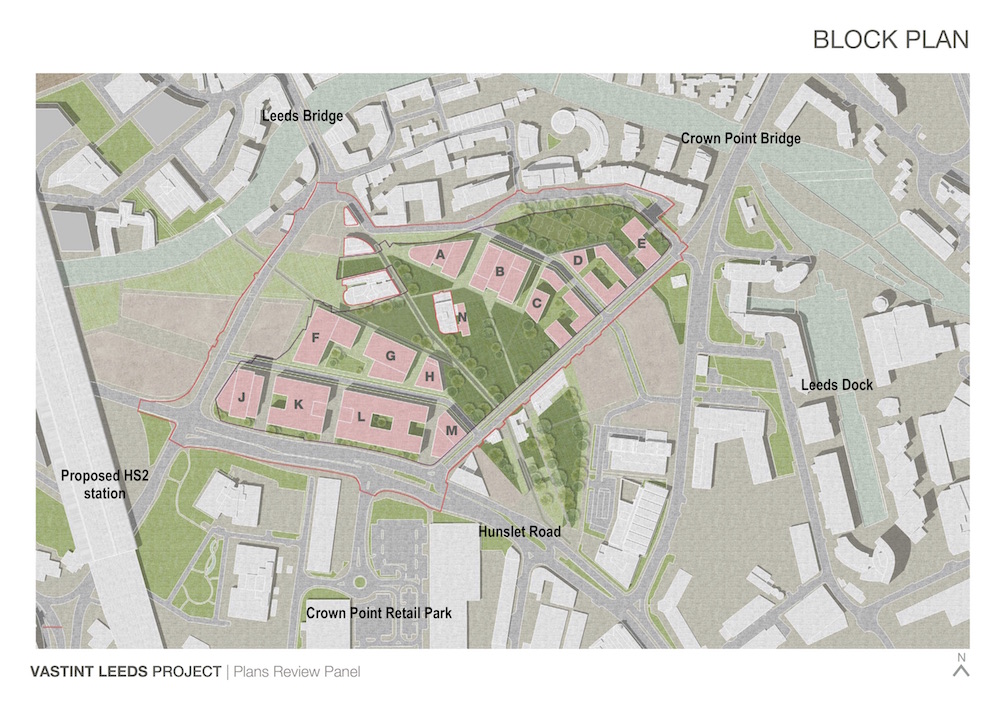 The plans, which will see 850 flats and houses amongst the mixed use development were debated at length at the City Plans Panel. Unusually, the plans came to panel despite an outstanding concerns from Highways England about traffic impact on the motorway network. Officers stated that they expect the issue to be resolved in the same timeframe as the Section 106 (contribution from the developers to community facilities) negotiations.

The site, which is bounded by Crown Point Road, Bowman Lane, Waterloo Street, Meadow Lane and Great Wilson Street, currently includes an office block used by Carlsberg  and Asda warehousing. These will be demolished, but The Tetley art gallery, Salem Chapel, the Asda petrol station and other buildings fronting Meadow Lane will remain.

Office blocks and a hotel will be located on the Great Wilson Street side of the plot, with residential blocks towards Crown Point Bridge. A park in the form of linked green spaces will follow the line of the old Hunslet Road, in line the ‘Hunslet Stray’ proposed some years ago.

Although the plans are only in outline form, with ‘indicative’ blocks marked on the plans, Councillors were reassured that each part of the development would be subject to approval by the panel as the project develops over coming years.

Vastint confirmed that they are in Leeds for the long term and that unlike most developers they will retain ownership of the land and commercial units. This, they say, will guarantee a high quality development for the long term. Asked about the park space, they said they were in discussions to lease the park to Leeds City Council and manage it jointly. They also confirmed that the park would form the first part of the development.

Councillors were very supportive of the plans overall.

The vote was moved by Cllr Neil Walshaw (Headingley) who said:

“We are a panel of detail and that’s as it should be, but I am very supportive of this scheme.”

“We are all delighted with the application. It has taken a long time to discuss because it is such a large and important project.”

“This is going to be a credit to the city.”

You can read the full report considered by City Pans Panel here: http://democracy.leeds.gov.uk/documents/s166048/Application%20No.%201702501OT.pdf