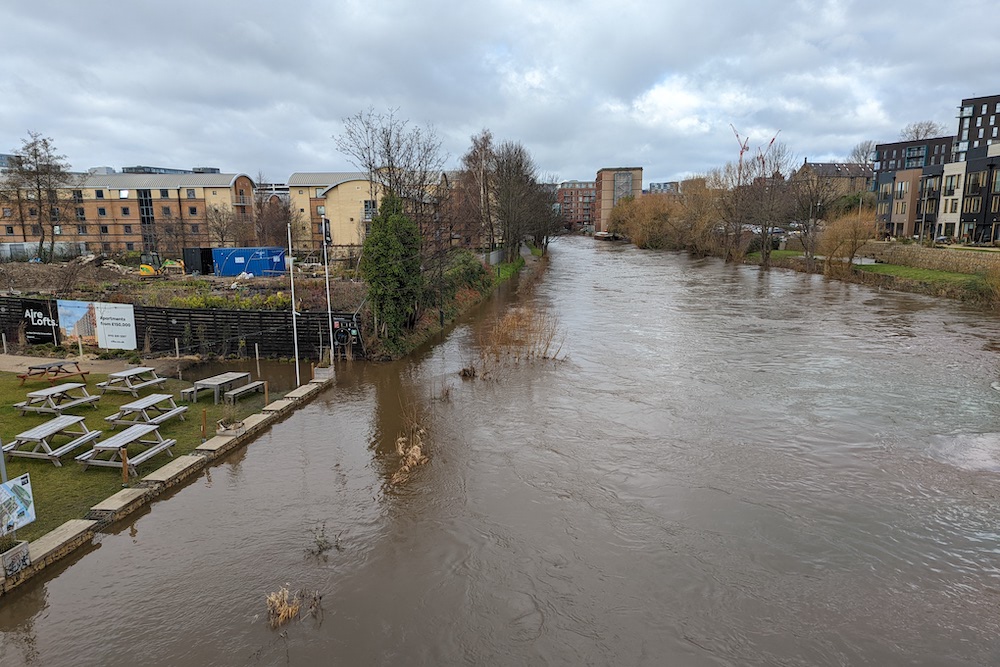 Leeds City Council has today (23 February 2022) issued an update on the impact of the storms which have hit the city in recent days.

In the last week Storms Dudley, Eunice and Franklin have brought extremely high winds of up to 75 miles per hour, and significant rain and snowfall, which over six days has been higher than the average for the whole of the month.

The result of such challenging conditions has been exceptionally high river levels, with officers from the council’s bridges, highways and flood risk management teams working with colleagues from the Environment Agency and emergency services including West Yorkshire Police and West Yorkshire Fire and Rescue Service as well as community groups, flood wardens and Network Rail to monitor and respond to help keep people safe.

On the River Aire, the rising levels triggered the weir gates of the Leeds Flood Alleviation Scheme at Crown Point and Knostrop to be activated, and the floodgates at Holbeck to be closed, on Sunday morning. Those measures proved effective in preventing flooding in the city centre. While not as high as the floods caused by Storm Eva on Boxing Day 2015, the levels on the River Aire at Armley reached approximately four metres, only marginally lower than during Storm Ciara two years ago.

With the second phase of works on the Leeds Flood Alleviation Scheme now well underway, investing a further £112.1million on flood prevention measures along the Kirkstall Corridor and upstream, measures were taken to move work equipment where possible. Unfortunately, due to the volume of water and speed of the river, estimated to be running at approximately 40 miles per hour, a construction pontoon broke free from its moorings and travelled downstream into the city centre. On its journey it badly damaged a service bridge, which was due to be removed as part of the flood alleviation works, before breaking up as it reached the Dark Arches under Leeds Station. Plans are underway to recover the pieces and the equipment it was carrying when the river drops to a safe level.

Council officers are continually assessing all key infrastructure across the city including bridges. All footbridges and structures which the pontoon passed have been assessed and declared safe.

Weather conditions and river levels are now easing, but with further periods of extreme weather expected in the coming days all residents are advised to remain vigilant, and to check the latest information from the Environment Agency, weather and travel providers before making journeys.

“We all remember the devastation caused by Storm Eva in 2015, and while conditions weren’t as serious this time it is very pleasing that our flood defence schemes proved effective in shielding people and properties from its impact, especially our Otley Flood Scheme which was tested for the first time. With extreme weather events becoming more frequent it is important we all do everything we can to be aware and keep everyone safe.

“The loss of the pontoon was unfortunate, but thankfully no-one was injured and it does serve to underline the need for us to get the second phase of the Leeds Flood Alleviation Scheme completed as soon as possible so we can be as protected as possible from threats like this.

“I’d like to thank everyone involved from all agencies in recent days for their efforts in very challenging conditions to keep people safe, and especially for those community volunteers and flood wardens who give up their time to help others and keep the city moving.”

Flood alerts from the Environment Agency can be set up free at www.gov.uk/sign-up-for-flood-warnings along with weather warnings from the Met Office at www.metoffice.gov.uk/weather/warnings-and-advice/uk-warnings.

Photo: Flooded footpaths along the River Aire in Hunslet by Kirstin Spence