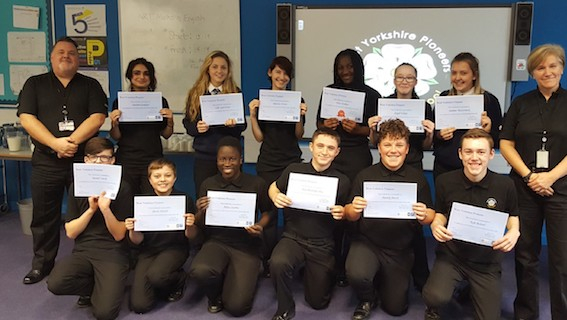 The West Yorkshire Police Pioneers which was set up for the county’s young volunteers aged 14 – 16, is being expanded after a successful first year.

PC Sean Statham and Cockburn School recognised there were pupils who wanted to learn more about the Police Service, law, rights, and how it affects them. They believe it is one of the most important age groups where nurturing and learning can be instilled in young people who are struggling to find their place in the community.

Sean said in the original proposal for the scheme: “It’s a prime place to start with the education of the young in relation to the law, rights and responsibility.”

David Gurney, Headteacher at Cockburn said: “I am very proud of our partnership with the West Yorkshire Police and our pupils really value this opportunity to get out into the community in such a positive way.”

The aims of the Pioneers scheme are:

Volunteering is the key word here. The scheme develops the skills and understanding of the pupils involved in other ways than classroom teaching as it is not in school time, it’s after school. They had sessions on First Aid, Pocket Notebook rules, the phonetic alphabet and how to use police radios -complete with status codes. In one exercise they mocked up a police foot chase in the school grounds and it was great to hear them ‘arrest’ one of their teachers and go “Code 112!”

This scheme is important for the future of volunteering at West Yorkshire Police, as some of the children taking part in the West Yorkshire Pioneers may be future Special Constables and Police Support Volunteers.

PC Statham said: “The feedback was really positive” after the pilot of the first Pioneers programme finished. It helped turn pre-conceptions of the police around and had an exceptional youth engagement according to Sean. With more activities and trips out to Carr Gate Police training facility, there is a lot for pupils in the new cohort to look forward to, increasing interest in the Police and therefore the likelihood of more young people volunteering, not just for the Police, but for the community in general.

This five year project aims to build relationships in Belle Isle and Middleton by engaging communities in a variety of ways and develop community pride and cohesion, ensuring the community views will be at the heart of the plan.

Councillor Kim Groves (Labour, Middleton Park) said: “The Yorkshire Pioneers Scheme is one of the best schemes I have seen as a Local Councillor. I say this for two reasons, the age group of the young people involved and the fact that they are often the hardest to engage with.”