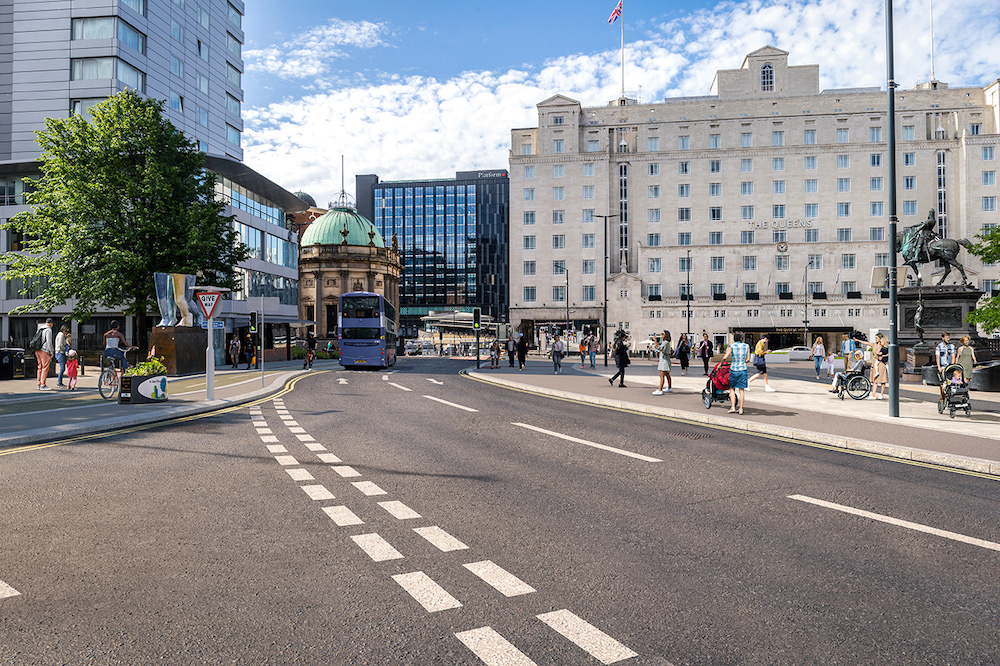 Major changes are taking place to vehicle movement in the city centre, as King Street and Thirsk Row are becoming two-way, starting on Sunday 8 January 2023.

These form part of Leeds City Council plans to make City Square people-first by removing general through-traffic away from the area. This next phase will facilitate works to the area in front of the Queens Hotel. There will also be no longer vehicle access to Wellington Street. Buses and taxis will need to travel via Infirmary Street and Kings Street to access Wellington Street.

From 6am Sunday 8 January, the following city centre road layout changes will occur:

Since November works have started on the removal, alteration and replacement of existing road markings, traffic islands, signage, and signals. Some of the works will be completed before the Christmas break. The final alterations can only be done immediately prior to the change in the period before 8 January. 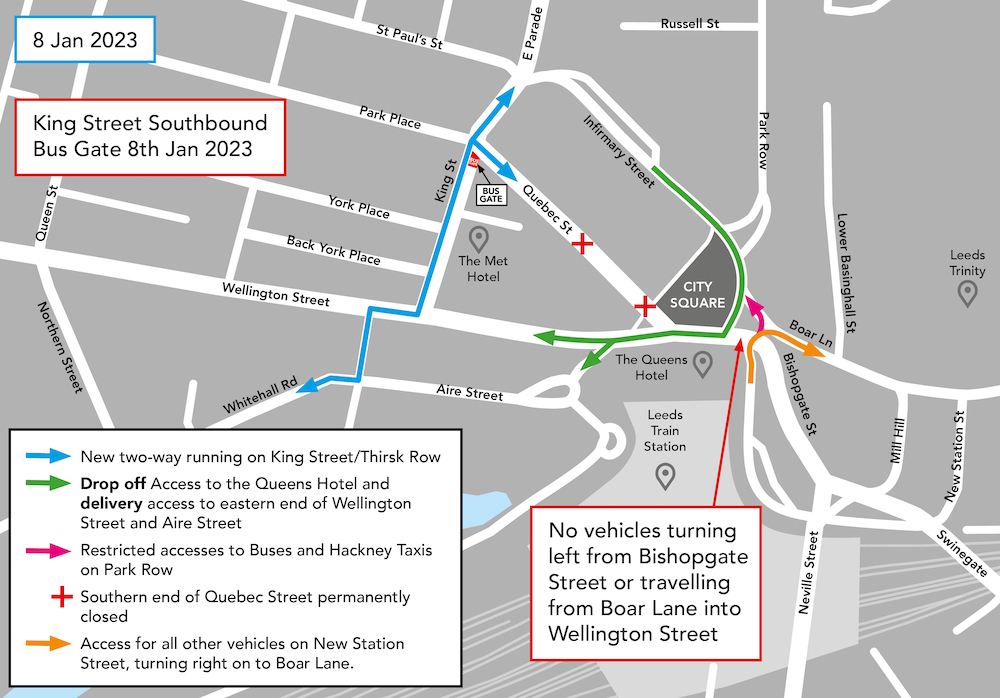 From Wednesday 4 January along Thirsk Row, Wellington Street, Quebec Street and King Street, a series of lane and road closures will take place. During the final 24-hours prior to the switchover, there will be further closures, however most of the works will not close the full section of road.

Access will be maintained throughout for businesses, residents, and emergency services, with the final re-surfacing works planned for the spring/summer 2023.

Works by other parties such as utilities companies and private building developers will also have an impact on the road network. The council does everything it can to co-ordinate works with these stakeholders. The timing of these phase of works has been planned to coincide with lower traffic levels, after the Christmas peak.

Starting from 4 – 22 January 2023 development utility works are planned along Whitehall Road, from the Globe Road junction towards Springwell Road junction. Yorkshire Water plan to follow these with works on Whitehall Road and Globe Road, from 23 January until 31 March, affecting the Holbeck area. They will operate under manual traffic signals 7am to 7pm to minimise disruption and seven days a week to shorten the duration of works.

“I know that no one likes road works and that they cause disruption, but they are necessary to improve our road network and keep Leeds moving. We’re working as fast as we can to make these improvements and I want to thank everyone in advance for their patience. We have done work to try and minimise the disruption these works will have, but no matter the amount of planning there will be some congestion.

“That’s why it’s important to let everyone know about these significant changes on King Street, Thirsk Row and around City Square happening by 8 January. We’ve planned these works to coincide with reduced peak traffic, after the Christmas break.

“King Street and Thirsk Row becoming two-way is a major change in the city centre. For road safety purposes, we’re putting in place signage and other measures to help pedestrians who should take extra care when crossing these roads.

“If you’re planning to travel to the city centre during the works, I would encourage you to use alternative methods of transport such as the Park and Ride service, buses, cycling or walking.

“The Park and Ride service is a great alternative to driving into the city. If you feel you really must drive into the city centre, please plan your journey in advance, try to avoid the area, allow extra time, and consider travelling outside of peak hours. We have put together alternative routes if driving via www.leeds.gov.uk/planahead and again, thank you for your patience.”

Plan Ahead to avoid being affected by congestion

Motorists are advised to plan ahead when travelling into the city centre to avoid becoming caught in congestion because of the works. From 4 January and over the switchover weekend 7/8 January, expect delays and possibly avoid the area if you can.

Leeds has three Park and Ride sites located at Stourton, Elland Road and Temple Green. Park and Ride is cheaper than city centre parking with electric buses running every 10-15 minutes, direct into the centre. Adult return fares are £3 before 1pm, £2 before 3pm and only £1 after with up to three children travelling free with every fare paying adult.

The council is urging people to plan their journeys in advance and allow extra time, and to consider alternative methods of transport.

Motorists who have no option other than to drive should consider travelling outside of peak times where possible or use alternative routes which do not pass through the city centre, such as using Junction 4 of the M621 instead of Junction 3.

A map of alternative routes has been produced along with directions to a number of key destinations, which all avoid using Junction 3 of the M621 leading on to the route towards City Square, where major highways works are currently underway.

The dedicated webpage http://www.leeds.gov.uk/planahead contains details of ongoing works around the city centre, along with links to the national one.Network system showing all planned utility and roadworks across Leeds. Visitors can also sign up to receive regular email updates.