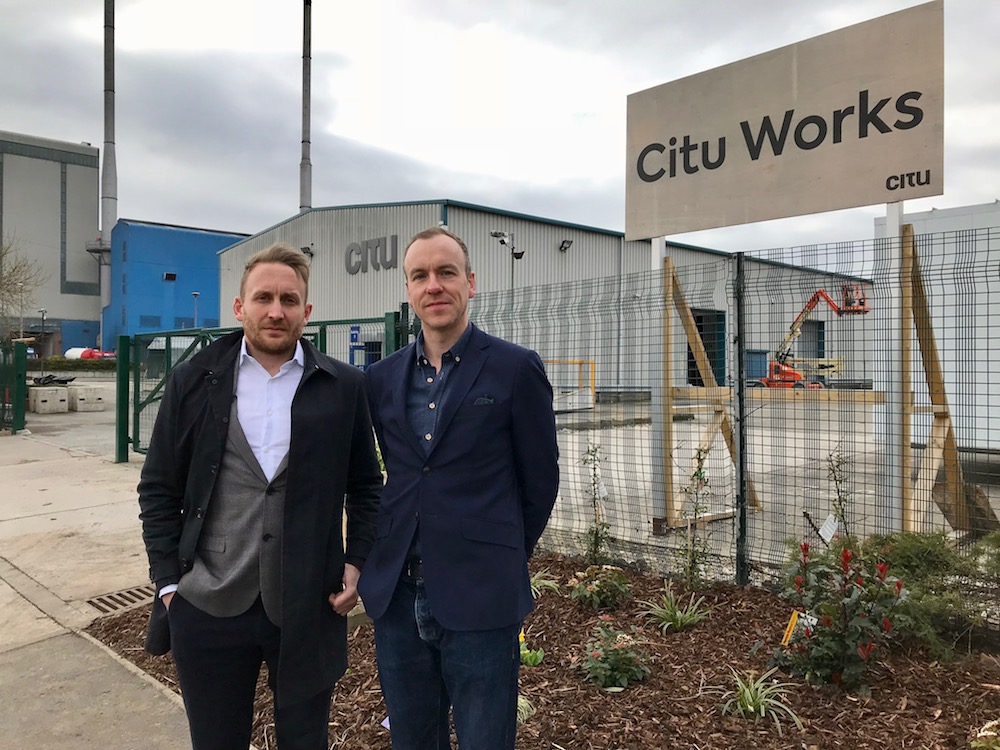 Two hundred years after the first industrial revolution, Hunslet is once again at the centre of a technological revolution. This time in housing construction.

Environmentally sustainable homes that most of us have only seen as unique properties on TV’s Grand Designs will soon be rolling off a production line at Citu’s factory on Clarence Road.

As previously reported in South Leeds Life, Citu are developing a site that spans the River Aire and are building the homes in sections at the factory before assembling them on site. The first homes started being assembled on site last month after nearly 12 months of groundworks.

The site at Low Fold, close the A61 flyover was formerly used as an oil storage depot so a lot of remediation work was needed. That was followed by laying water, electricity and telecom services; digging foundations; raising ground levels to avoid flooding; and constructing the deck that will keep cars separate from residents under their homes.

During that time the factory has been working on a prototype ‘Citu Home’ perfecting every element that will go into the new homes. Completed wall, floor and ceiling panels are now being moved to site for assembly and installation of services.

CITU plan to expand the factory so that services can be built into the panels before they go to site. When fully geared up the factory will be producing 200 houses a year rising to 750 houses per year.

The factory already employs 70 people including 12 apprentices (soon to double) recruited through the nearby Leeds College of Building.

CITU has plans for 1,000 homes on various sites across the country and will sell the Citu home to other developers.

The CITU home is built to the highest environmental standards. It is air tight which means it needs only a minimal amount of heating. It is designed to maximise solar gain in winter, with south facing windows, without overheating in summer. It will use smart technology to help people further save energy.

“Our cities are not sustainable as they are” he says. “People live on the edge and drive to work in the centre everyday. If we want to move to low carbon living we have redesign our cities so that we walk or cycle to work.”

Design is clearly important in the Climate Innovation District. Citu has used Scandinavian architects to design not only the homes, but also the public realm surrounding the houses and apartments.

“If we want people to live in the city centre, not just young people, but families we have to make it attractive to them and help them build a community. None of our homes are available as buy-to-let properties, we are trying to build a stable community.”

Part of that process is building a new foot and cycle bridge across the river which will not only unite the two halves of the site, but create links for the wider community.

“We’ve calculated that a child living in Cross Green and attending the Ruth Gorse Academy will shave 14 minutes off their walk to school. More importantly they will avoid having to cross seven roads.”

The bridge is due to be installed in August when the first residents will move into their new homes. These will be the first family houses built in the area since the old terraces were demolished. Let’s hope the new residents build as strong a sense of community identity as existed in those streets.

Find out more about Citu’s Climate innovation District at www.citu.co.uk.