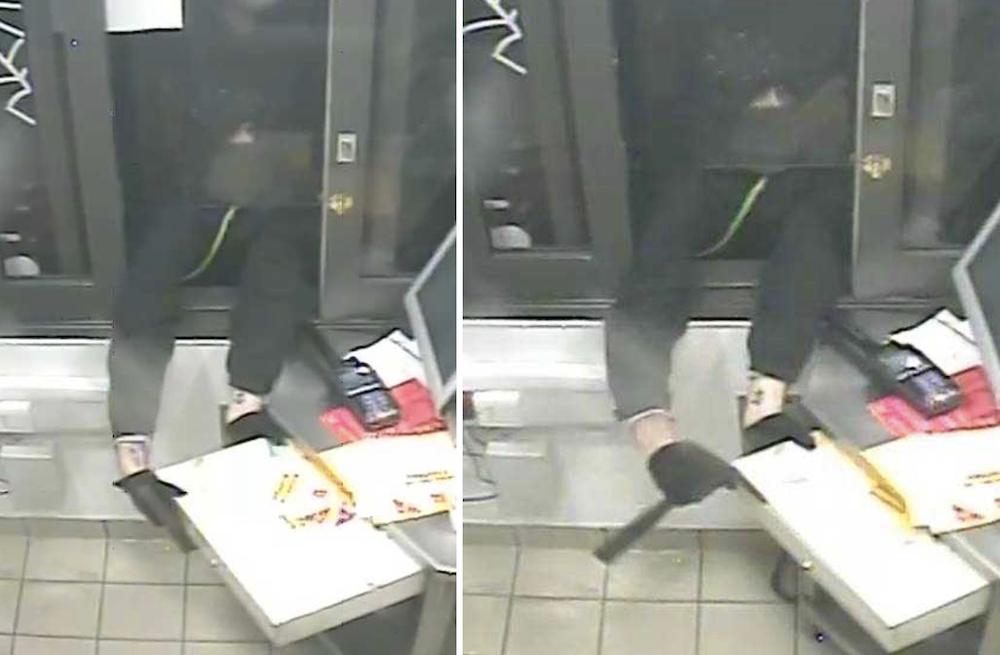 Detectives investigating a series of robberies and burglaries targeting McDonald’s drive-thrus in Leeds have released images of the masked suspect showing tattoos on his wrists.

The images were from an armed robbery that occurred at a McDonald’s restaurant in Killingbeck Drive at 4am on October 26 2021.

The suspect, who was armed with a hammer, approached the drive-thru window and attempted to steal the till drawer but dropped it. He then went inside and threatened staff before escaping with the till drawer.

The same suspect is believed to be responsible for five other similar incidents at McDonald’s premises.

At about 6.30am on November 19, he sneaked into the restaurant in Low Road, Hunslet, through an insecure fire exit and hid from staff before entering the drive-thru pay area. He then threatened a member of staff with a crowbar and stole the till.

A restaurant in Oakwood Lane was targeted at about 5.50am on November 16. The offender forced the drive-thru window with a crowbar and reached inside to take the till.

At 4.40am on November 6, the male spent several minutes trying to force the drive-thru window at the Cardigan Fields branch but left empty handed when disturbed by staff.

At about 5.20am the same day, the suspect attempted to steal the till through the drive-thru window at the McDonald’s in Elland Road but fled when spotted by a member of staff.

The branch at Low Road, Hunslet, was also targeted at about 9.30pm on October 12 when the male tried to force with drive-thru window with a crowbar but ran off after his attempts failed.

“The suspect has had his face covered on each occasion but has revealed tattoos on both his wrists as he reached through one of the drive-thru windows.

“Although those tattoos can’t be seen in detail on the images, we are hoping that someone may be able to recognise him from those or have well-founded suspicions about who he is.

“We are continuing to carry out extensive enquiries into these offences and would urge anyone with any information that could assist the investigation to contact us immediately.”

Anyone with information is asked to contact PC 1622 Pearson at Leeds District CID via 101 quoting crime reference 13210548609 or online via www.westyorkshire.police.uk/101livechat