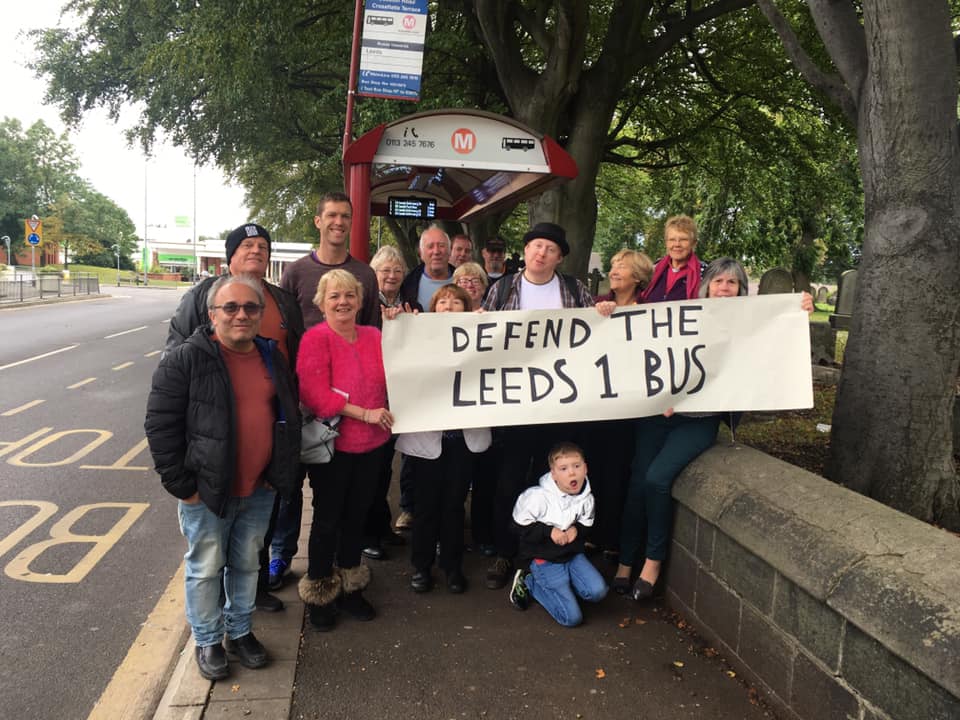 On 5 October Beeston bus users attended an angry and frustrated meeting at St Mary’s Church in Beeston to discuss the changes that were made to the number 1 bus route at the beginning of September and the alarming response from First Bus West Yorkshire in reply to a Tweet querying if the 1 route will be returning to normal once The Headrow Improvement works are complete that “at present we are unable to confirm this”.

The meeting was addressed by Councillor Andrew Scopes and everyone in the meeting shared the impact of the changes on their lives, and the lives of those they cared about, and expressed their concern that this change could be made permanent.

Some in the meeting talked about the impact on family life such as one local resident whose sister lives in Holt Park at the end of the 1 route.

There are worries about what this could mean for young people going to further education in north Leeds such as to Notre Dame Sixth Form and a former teacher raised how many of his students went to Lawnswood School from this area. Local residents also go to the University of Leeds and they are now finding it much harder to get there and back.

The number 1 route also serves major sporting facilities in Leeds. One Beeston resident who regularly goes to support the Leeds Rhinos at Headingley Stadium with his disabled daughter now faces four buses in total (and four fares!) and they will find the journey home almost impossible. Another resident who goes to watch cricket at Headingley will also now face huge difficulties having to walk across Leeds at night after evening events. In south Leeds we have Elland Road football stadium and more people will drive and congest Leeds on match days.

It was clear from the meeting that the impact on disabled and elderly residents is substantial especially considering the fact that the journey from Leeds train station towards the universities is uphill and through extremely busy streets with multiple crossings. Examples of residents who have diabetes, difficulties walking and from someone who is partially sighted were shared, which brought home the real life day-to-day challenges this decision to split our service into two has brought about.

Many Beeston residents do their shopping in Morrisons at the Merrion Centre and take the opportunity to visit other services nearby such as the Post Office and banks. Without being able to get on a bus that comes straight back is proving difficult for people, particularly when they are carrying lots of shopping.

The effect on workers using the bus from Beeston into the centre of the city and beyond was raised too. A carer who works in Headingley now has to leave home at 5:45am instead of 6:15am and she has an extra hour and a half travel each day since the route was changed.

Residents who need to travel home at night are frustrated by the decreased frequency of the new number 10 service and a single woman traveller expressed her fears about having to wait lengthy periods of time for two different buses at night.

The impact on Leeds and climate changed was also discussed. It was remarked that there is an encouragement to stop us using our cars as much to help the climate but some now feel forced to get back into their vehicle or get a taxi as the current bus route isn’t taking people where they need to go.

Questions were asked too – why has the number 1 been spilt in half and not sent up East Parade like the 27 and 28?

The overall feeling of the meeting was that the number 1 bus route is an iconic route and the possibility that it’s splitting in half could be permanent will add to the isolation that people in south Leeds already experience. The meeting ended with campaigners determined to fight this cut in our bus services. Some of the people at the meeting were photographed at the local bus stop with a banner proclaiming our pledge to ‘Defend the Leeds 1 bus’.

4 Replies to “Campaign to get the 1 bus route reinstated”