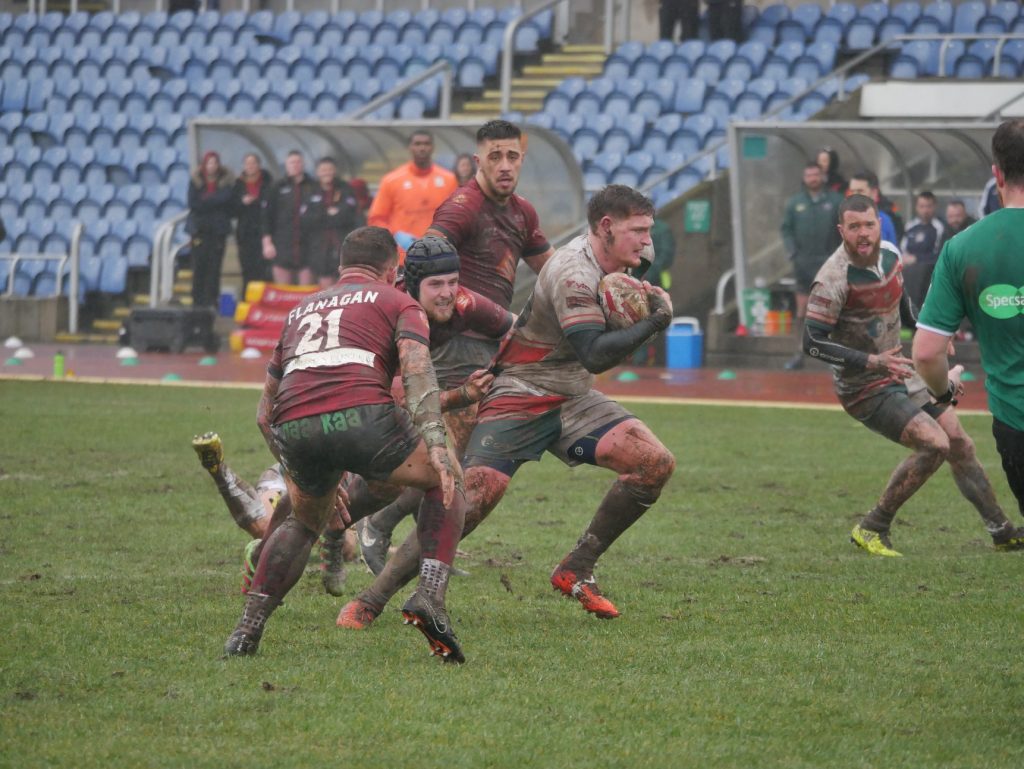 Bradford Bulls knocked Hunslet RLFC out of the Ladbroke’s Challenge Cup today at a wet and muddy South Leeds Stadium.

Rumours that the Bulls’ coaching staff did not wish the game to go ahead could be appreciated as the rain lashed down before kick off and the pitch looked like a quagmire. Though it was Bradford who gained the first advantage of the conditions when on 3 minutes an attempted 40/20 was fielded by Hunslet full-back Jimmy Watson, only for his momentum in the mud to carry him over the touch line.

Garside barged over for Bradford from the resulting scrum and with a conversion and a penalty on 10 minutes from a late tackle the Bulls stormed into an 0-8 lead.

Bradford’s next attack saw a risky long ball thrown out to the left wing, Hunslet’s Jordan Gill came close to interception, but instead Ryan dived over to give the Bulls a 0-12 lead, 0-14 after successful conversion.

At a point a minute things looked ominous for the home side, but slowly their forwards started to turn the screw and get on top, Reed and Haley particularly impressive.

Substitute hooker Daniel Halmshaw started to cut into the Bulls’ defence and was unlucky to have a try ruled out when Hunslet were judged off-side from Sanderson’s grubber kick. The new boy did register though on half time when industrious Jack Coventry slipped a lovely ball out of the tackle for Halmshaw to go over.

Hunslet were ending the half the stronger when Will Cooke was sin-binned for kicking the ball away, but at 6-14 all was to play for.

Twelve man Hunslet started the second half the stronger of the two teams, and a Sanderson penalty narrowed the scores to 8-14. Hunslet attacked again and were unlucky when a Bradford injury stole the momentum, but another Sanderson penalty on 50 minutes tightened the score even more to 10-14.

Rugby league is about momentum though, and from the kick off Hunslet knocked on and Bradford used this to apply pressure. Johnson slipped out of a tackle to go over to make it 10-20, a penalty was converted after a high tackle to further the lead at 10-22. Then at last Bradford showed some class when a flowing move including former Hunslet favourite George Flanagan ended in a try under the posts.

Bradford then looked to be heading for a flattering scoreline when Ricketts fielded a precise kick to the corner to send the Bulls 10-34 up, but to be honest Hunslet were more deserving, and in the end had the better of the latter moments Nicholson and Walker running strong.

So, no dream of Wembley for the Myrtle, Flame and Whites, but a bit more pride after Good Friday’s defeat to Keighley. Some impressive performances today give coach Gary Thornton a selection headache for next week’s trip to Oldham.