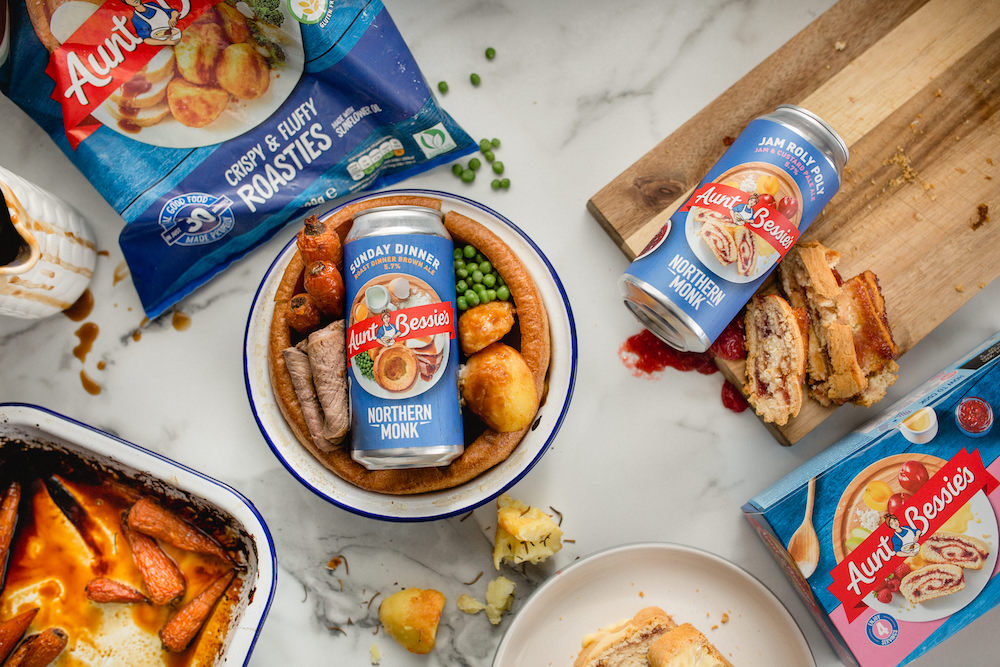 Holbeck-based Northern Monk brewery and Aunt Bessie’s, who are based in Hull, have joined forces to brew the UK’s first, two-course, roast dinner beers. The first, a Roast Dinner Brown Ale has been brewed with Aunt Bessie’s much-loved Yorkshire puddings and roast potatoes. The second, a Jam & Custard Pale Ale is based on Aunt Bessie’s iconic Jam Roly Poly.

The two flagship Yorkshire brands have partnered to create an industry-first. In a bid to spread positivity at a time of isolation for many, Northern Monk and Aunt Bessie’s have been working for months behind the scenes to create a unique recipe for a two-course roast dinner… in beer form.

Nothing compares to the comfort of sitting down to a full roast dinner with your family and friends. Unfortunately, that’s something that many of us are going to struggle to do this Easter weekend. Northern Monk, who are on a mission to create unique beer experiences, approached Aunt Bessie’s about replicating the flavours of a roast dinner and dessert using their best-selling frozen products, and the two brands set out to turn the idea into reality.

The beers have been brewed at Northern Monk’s Leeds-based brewery, with the two brands working together on the recipe and ingredients. Sunday Dinner, a 5.7% Roast Dinner Brown Ale, is brewed with actual Aunt Bessie’s Crisp & Fluffy Roasties and Original Golden Yorkshires. Jam Roly Poly, a 5% Jam & Custard Pale Ale, is a recipe inspired by the Aunt Bessie’s product of the same name, and is brewed with plum, apricot and strawberry – the same fruits used in the Aunt Bessie’s product, along with custard to round out the flavours.

Community and collaboration are at the core of Northern Monk’s business, they focus on working with the people that share their passion, and their values. Aunt Bessie’s have been a Yorkshire staple for 25 years, with the two partnering for the first time on this entirely exceptional product.

“It’s been an honour working with Aunt Bessie’s, a truly iconic Northern brand. There’s nothing quite like a Sunday Roast with all the trimmings, and on a weekend where we’d usually be getting together with our families for a traditional Sunday Dinner, we’ve teamed up to bring you something a little different. We’ve worked together to create something that’s never been done before, and we hope that it brings some well-needed positivity to the nation.”

“There’s nothing like coming together with loved ones over a roast dinner and a cold beer, and so to join forces with a fellow Northern brand to create something which has never been done before is really special. We’re sure Aunt Bessie’s fans are going to love the combination of a two-course roast dinner beer and as we celebrate Aunt Bessie’s 25th birthday this year, what better way to mark the occasion?”

The Sunday Dinner and Jam Roly Poly beers are launching on Northern Monk’s online shop on Sunday 12 April 2020. The cans can be purchased separately for £3.50 each on the online shop, or as a Two-Course Dinner Pack for £6. Availability is limited, the beer can be purchased via www.northernmonkshop.com.