Scores of households on an estate in Beeston are facing eviction as the new owners impose steep rent rises.

Last November South Leeds Life reported on the sale of the estate – Kirk Beston Close and Cross Heath Grove. New owners PlaceFirst have decided to refurbish the estate to an ‘aspirational’ level and introduce new, higher, rents. Tenants have been given two months to apply for a refurbished home at the new rent, or leave.

South Leeds Life has spoken to a number of affected tenants who were shocked to receive the news in letters which arrived on Friday (17 March 2017). They told us they felt forced out and had no control over the situation. One tenant told us she had lived on the estate for nine years:

“It might not be much, but it’s our home. I’ve always felt safe here. Now I don’t know what we’re going to do.”

“It’s not just a house, it’s my home. If I can’t find somewhere nearby I’ll have to give up my job and my kids will have to move schools.

“It’s not right. I haven’t done anything wrong, I’ve always paid my rent. What do I do?”

“When they took over they came round knocking on the doors, all smiles. Then they sent us a letter to say get out. PlaceFirst? They should be called ProfitFirst.”

PlaceFirst are offering up to £500 to help tenants who move and are encouraging them to seek advice from the Council’s Housing Options service.

South Leeds Life understands that staff at Housing Options were shocked to see the letters and are arranging to visit tenants in their homes on the estate.

Cllr Adam Ogilvie and Hilary Benn MP will be holding their regular surgery at Beeston Library on Friday (24 March 2017) from 5pm.

We approached PlaceFirst for a comment but have not received a response. 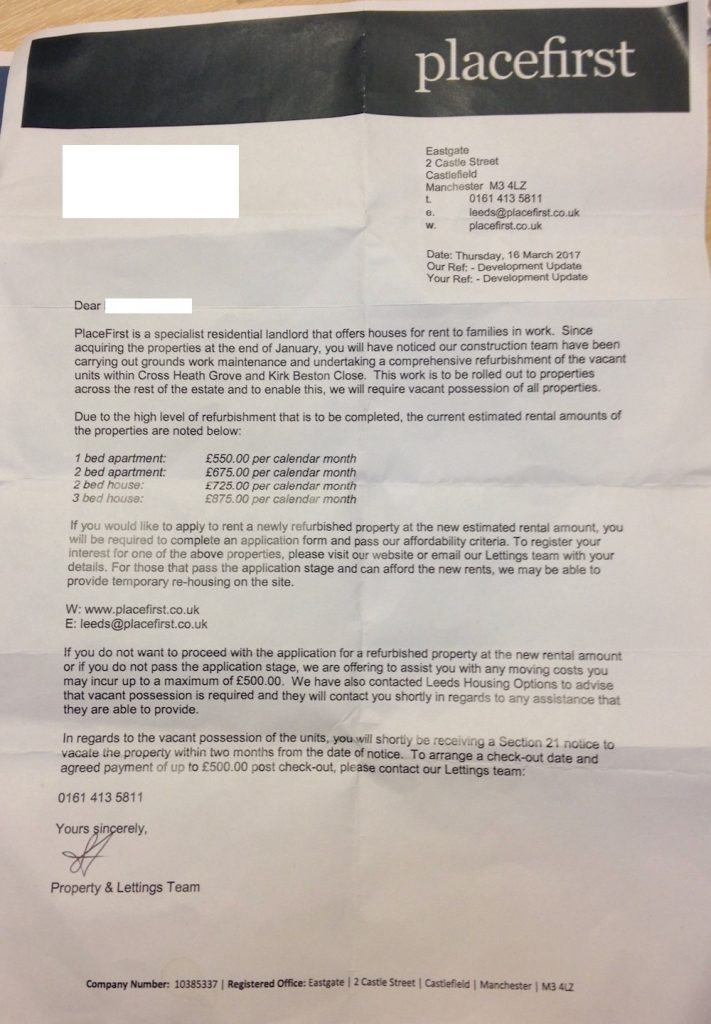 6 Replies to “Beeston tenants set to lose their homes”