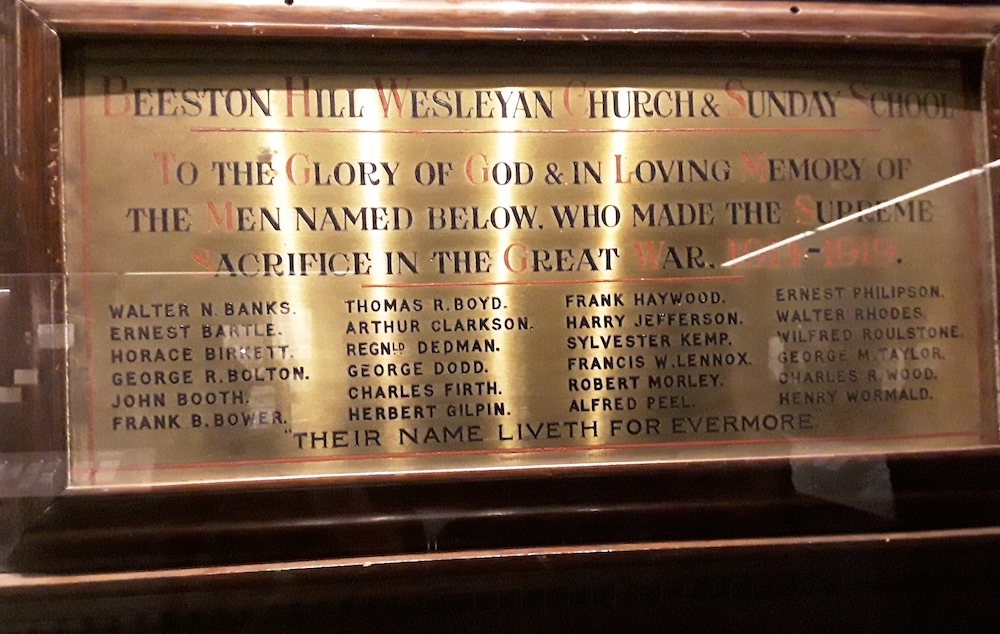 The weather was cold, wet, driving wind: how did the young men survive the trenches, let alone the bullets and artillery? I was on a WW1 Battlefields Tour and I could get back on a warm, dry coach after half an hour: the soldiers could not.

I was making a mini-pilgrimage to find Hunslet Rugby League players’ names on memorials. I’d been set the task of finding out what our players did in the war and it had caught my imagination. Some of the records I couldn’t find – for example Fred Smith is not an easy name to pinpoint exactly in hundreds of war records, nor is anyone from Wales called Jones. Some of the records were lost in  the Second World War when the building was bombed. Still I had found enough to make the trip compelling.

Of course not all the Hunslet players had served in Europe. Billy Eagers had joined the Legion of Frontiersmen and gone off to Africa. Others connected with the club had important war work in the UK – making uniforms, mining coal, working on the railways.

Our trip took us to all the big memorials. We saw the Last Post, played by the local Fire Brigade at the Menin Gate. It was there that I found the commemoration of two Hunslet players, Mark Kay, who’d died at Ypres with the Cameron Highlanders, and William Dobson, killed in action also at Ypres, with the West Yorkshires.

At the Thiepval memorial, I found Thomas Henry Tillotson, killed on the Somme with the Coldstream Guards. There’s a new museum at Thiepval, full of poignant artefacts from soldiers’ kit including their tins of Oxo cubes, weaponry and stark photographs.

In one room, there’s a surprising exhibit which I hope readers can tell me more about. It’s the war memorial wooden board from inside Beeston Hill Wesleyan church. Why it is there, I don’t know. When was it gifted to the museum? Why isn’t it in  Leeds Museum? Are any relatives of the soldiers left in Leeds? I know the Church has been empty for some time, but to give up its Roll of Honour seems strange.