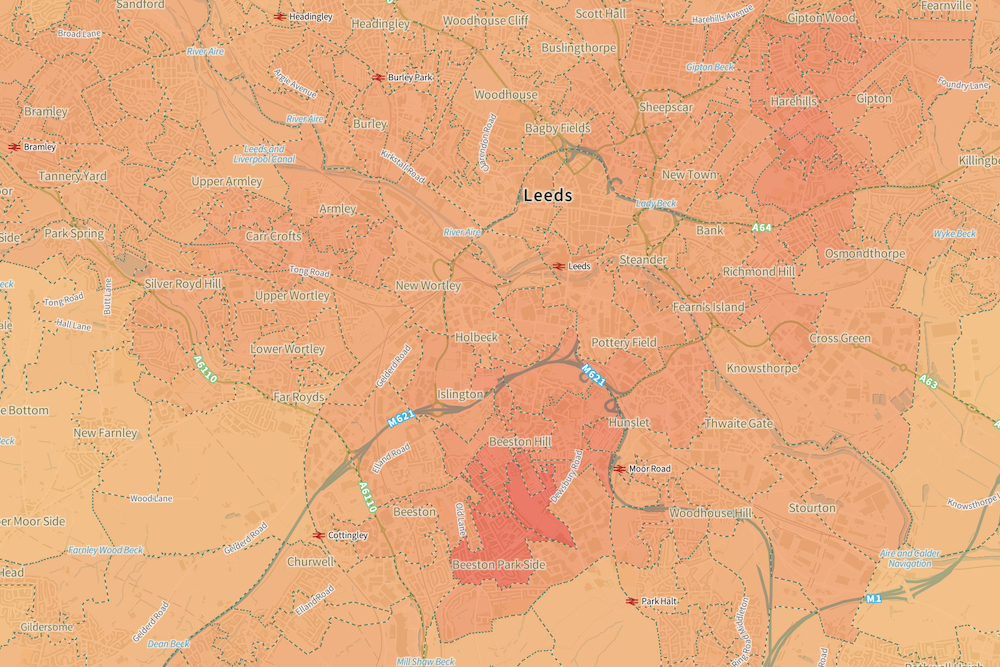 Average air pollution in parts of South Leeds are twice the level recommended by the World Health Organisation (WHO) for at least one of two of the deadliest air pollutants, according to new analysis by Friends of the Earth.

Using the latest official government data, Friends of the Earth calculated the average annual air pollution levels for two of the most serious types of air pollution – Nitrogen Dioxide (NO2) and Particulates (PM2.5) – for every neighbourhood in England, each with an average population of 1,700. View their ineractive map here.

Air pollution hits the most vulnerable the hardest, particularly children who can grow up with reduced lung function if living in an area with poor air quality, but also the elderly who are more likely to have a pre-existing condition worsened by bad air.

“It’s a scandal that people in parts of Leeds live in areas where average air pollution levels are twice World Health Organisation guidelines for either or both of two of the deadliest pollutants.

“Millions of people across the country are suffering the effects of living in the most polluted neighbourhoods – with the most deprived communities and people of colour the hardest hit.

“The new Prime Minister must get to grips with this public health emergency, which kills tens of thousands of people prematurely every year, and costs the economy billions of pounds annually, with a package of measures to clean up our air, including cutting car use.”

Rosamund Adoo-Kissi-Debrah is Founder and Director of the Ella Roberta Foundation, which was set up following the tragic death of Rosamund’s nine-year-old daughter Ella in 2013 from a severe asthma attack contributed to by air pollution. She said:

“This latest data is shocking, but unsurprising. It re-emphasises the urgency with which our country … needs action on air pollution.

“Everyone deserves a right to breathe clean air, particularly children, who are worst impacted because their lungs are still developing.”

Friends of the Earth is calling for tougher action on air pollution, including:

“We support the Friends of the Earth aspirations.

“Taking steps to improve air quality is a significant priority for our Labour administration and ourselves as local Labour Councillors for Beeston.

“The benefits of cleaner air on people’s health and wellbeing cannot be understated, and we owe it to our children and grandchildren to deal with the issue of harmful air quality.

“As our city rapidly approaches 900,000 people, providing a wide variety of clean, cheap, efficient, and easy to access transport options to meet our people’s needs will be not just critical to improve air quality, but to prevent long term gridlock of our transport network and economy.

“But the Tory central government must take the lead and invest fairly in transport. It is shameful only £500 per head is spent on transport in Yorkshire compared to £1476 in London. They also must properly invest in the vital road and charging network needed to allow for the more rapid take up of cleaner vehicles.”

“Shocking though it is, this report is welcome, shining a spotlight on a big hidden issue. I and others have been working away over the past years to build momentum around air pollution, via our ‘South Leeds Alliance for Clean Air’: a ‘deputation’ speech before the full City Council, schools workshops, events, and more.

“Perhaps because it is such an invisible and pervasive problem, it is hard to get attention and action on it – but let’s now change that. There’s plenty we can do, both in the city community and in our own lives: let’s get to work.”

South Leeds Alliance for Clean Air will be holding a meeting on Saturday 19 November, 10am at Dolce Vita, 287 Beeston Road, for people who want to get involved in their campaign.

Friends of the Earth have produced an online interactive map of air pollution across England at bit.ly/3zpg5qw Zoom in and click on your neighbourhood to find out about air quality where you live.

Main image: Detail from interactive map produced by Friends of the Earth showing the highest levels of Particulates (PM2.5) are in Beeston (darker red indicate higher level of pollution)