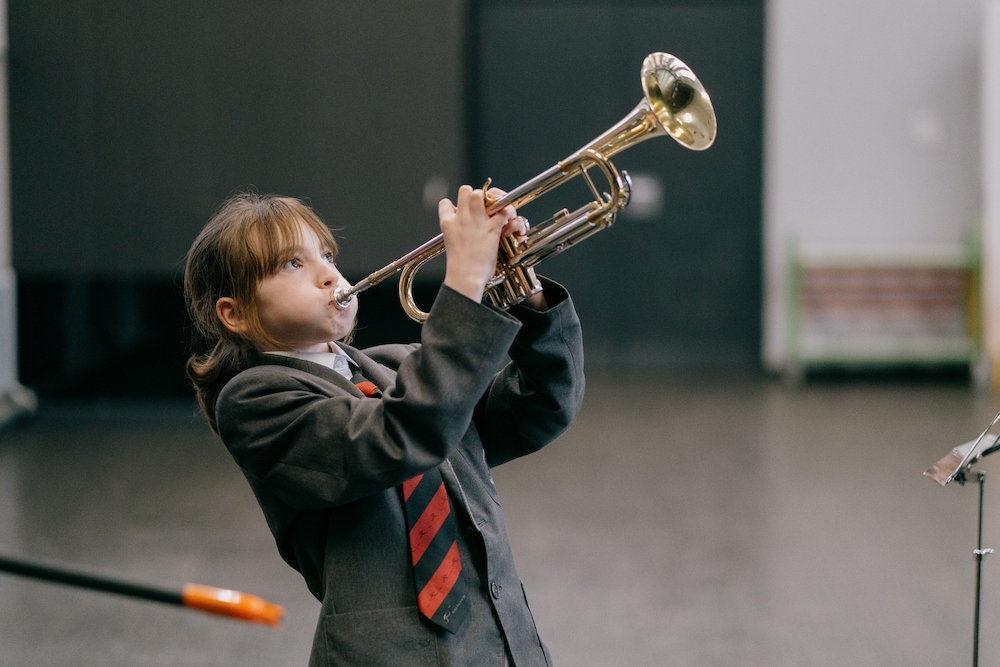 Opera North’s award-winning music education programme, In Harmony Opera North, marks its tenth anniversary on Wednesday 7 December with a special celebration in the Howard Opera Centre. The day will feature music and drama workshops for the youngest pupils, a composition session for the older children, and an opportunity for the aspiring young instrumentalists to play side-by-side with musicians from the Orchestra of Opera North. The day will culminate in an event featuring the vocal talents of the In Harmony choir, on stage together for the first time, and a performance from young string and brass players keen to showcase their skills.

“It makes me feel inspired and happy”

Over the past decade, the programme has opened up singing and instrumental playing to children who might not otherwise have had the opportunity to engage with music in this way. Joseph was a pupil at Windmill Primary School in Belle Isle when he was first introduced to music and performance through the In Harmony programme. Having sung in front of the Orchestra of Opera North, he was invited to join the Opera North Children’s Chorus before progressing to Opera North Young Voices. Joseph’s musical talent was subsequently recognised by Yorkshire Young Musicians where he successfully auditioned as a violin player. These achievements inspired him to study Music at GCSE, something he would never previously have considered.

Zinzile began her musical journey with Opera North when she started as a pupil at New Bewerley Community Primary School in Beeston where she is currently in Year 6. Being part of the programme meant she got the chance to audition for the part of Carmen’s daughter in Edward Dick’s production of Bizet’s opera ‘Carmen’ in Opera North’s 2021 Autumn and 2022 Winter Season. Having been given the role, she subsequently performed on the stage at Leeds Grand Theatre, Newcastle Theatre Royal, Nottingham Theatre Royal, and The Lowry, Salford Quays. She says of the experience:

“It was really fun, I got to meet a lot of people and I made a lot of new friends, who I’m still in touch with now.”

Originally launched in December 2012, In Harmony Opera North is a long-term residency in six primary schools across Leeds and Halifax and one secondary school in Leeds. The programme sees the company’s Education team delivering weekly structured small-group music sessions within curriculum time for every child in the primary schools. Early Years and KS1 enjoy musicianship classes each week, while all children in Year 3 and Year 4 receive a weekly strings lesson. At the end of Year 4, the students are given the choice to carry on with strings or to switch to a brass instrument instead. Years 3 and 4 also sing in a choir during the school day, with the opportunity to join the In Harmony Choir after school when they reach Year 5. Regular opportunities are provided for all In Harmony students to perform in Leeds and further afield, and they are given the chance to learn from, and perform with, the musicians of the Chorus and Orchestra of Opera North.

Quite apart from the confidence which acquiring new skills gives to the In Harmony pupils, engaging schools with music in this way has been shown to raise aspirations, build resilience and encourage the development of creative problem-solving and communication skills. The wider community has also benefited from the programme.

‘’Excellent work is taking place in the wider curriculum and the In Harmony project is breath-taking in its vision and scope. A clear impact of the work of Opera North in the school has been in the amount of parental engagement it has garnered. For example, it was standing room only for the Whistle Stop Opera performance last term.”

As the programme reaches its ten-year milestone, a clear progression pathway for the young musicians has been launched to ensure their learning can continue up to higher education level. ON Afterschool which is held in the schools during the week builds on the curriculum learning. Open to all in Years 5 and 6, it enables the young people to continue to develop their composition and instrumental skills in focused after-school sessions.

Talented and engaged young players are subsequently invited to join the Young Musicians Studio which is held in central Leeds on a Saturday morning and which provides small group tuition in musicianship, improvisation, composition and ensemble playing. Anyone wishing to carry on can then audition for one of Opera North’s Youth Ensembles which offer further development in vocal skills or instrumental playing. Opportunities are also given to join any of the instrumental academies offered by Opera North during the school holidays. Bursaries are available at every stage for individuals who may encounter financial barriers to participation.

“We are keen to ensure that as many children as possible have the chance to learn music – and that young people who wish to continue their engagement with music following the early years access provided by In Harmony have the chance to do so. ON Afterschool and Young Musicians Studio ease the transition to our Youth Company which provides a clear pathway through to higher music education via the Children’s Chorus, Young Voices, Youth Chorus and Youth Orchestra. Through these initiatives, we are looking to ensure that young people have a chance to develop their musical skills as far as they wish to go, regardless of background or previous exposure to music.

“The programme is not just about training future professional musicians, however. It’s about building a love of music and musical participation which will stay with these young people throughout their lives, bringing them joy and enhancing their wellbeing for many years to come.”

The In Harmony 10th Anniversary Celebration will be held in the Howard Assembly Room in Leeds from 6-7pm on Wednesday 7 December 2022. After a series of workshops and rehearsals for the participants during the morning and early afternoon, parents and invited guests will join the children to enjoy singing and instrumental performances from the In Harmony pupils alongside short presentations on the programme and its impact.

In Harmony Opera North is generously supported by Arts Council England, The Keith Howard Foundation, The Liz & Terry Bramall Foundation and the Opera North Future Fund. The Charles & Elsie Sykes Trust are In Harmony Ambassadors, while In Harmony Supporters include The Harrison-Frank Family Foundation (UK), Pinsent Masons and The Rudge Shipley Charitable Foundation.