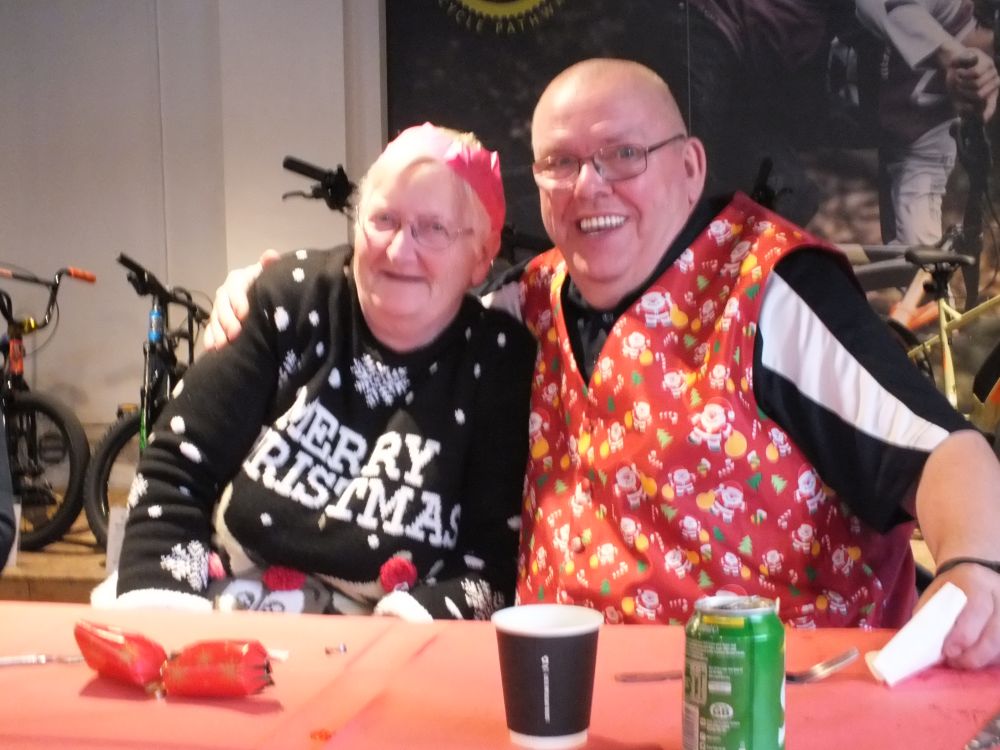 The famous Arm in Arm Walking Group which sets off from Middleton Elderly Aid, every Tuesday and Thursday had our first Christmas party at Leeds Urban Bike Park on 30 November 2021. We will now do this every Christmas.

Nicola suggests another party at Easter next year, or my thinking: the walking group’s fourth birthday next February. Maybe we could do both. Lol.

We stop off at the Leeds Urban Bike Park cafe half way round the walk for refreshments and Walters Giant Sandwich. The staff: Nicola, Joanne, Alicia, Meena, Emma, and Henri always look after us and nothing is too much trouble.

More about the party in a moment, but how did this walking group start?

Well, four years ago when I moved back to Middleton from my home in Belle Isle, I made myself known to Samantha, of Middleton Elderly Aid.

Sam asked me about my hobbies and my volunteer work. I told Sam my volunteer work was mostly at BITMO’s GATE in Belle Isle, where I used to live. We had a walking group there. I joined Julie’s Family Research Group (Ancestry) and I was the Centre’s official photographer and blogger. We also had a South Leeds Life News Cafe, there every Friday.

I also had a Memory Cafe at The Parnaby Tavern, for people who have Dementia and Alzheimer’s. During Covid we no longer ran the Memory Cafe and due to personal reasons I no longer do so.

So, Sam asked me if I would like to start off a Memory cafe, a Walking Group, and a News Cafe at Middleton Elderly Aid? I said yes to all of these.

Sam put me on a First Aid course, which I passed along with Leanne, and I was DBS checked with Police.

The walking group really took off and now so popular, Sam lets us have the Walking Group twice a week. The group has around 20 members and around 10 members on the walk at any one time. Some group members also have other volunteer work at MEA , so can’t all walk at the same time.

Also at the time, as I was the only walk leader, we needed more group leaders, so Sam sent Walter and Christine off on a group leader course, this helps when one of us is off ill, on holiday, or MEA trips.

Back to the party … 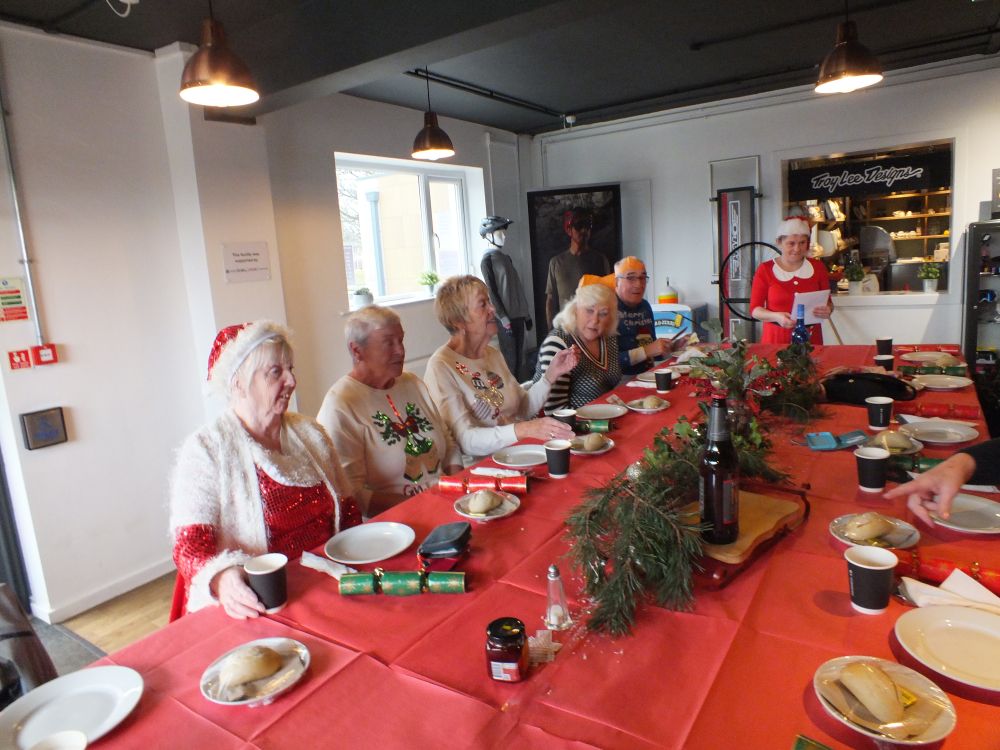 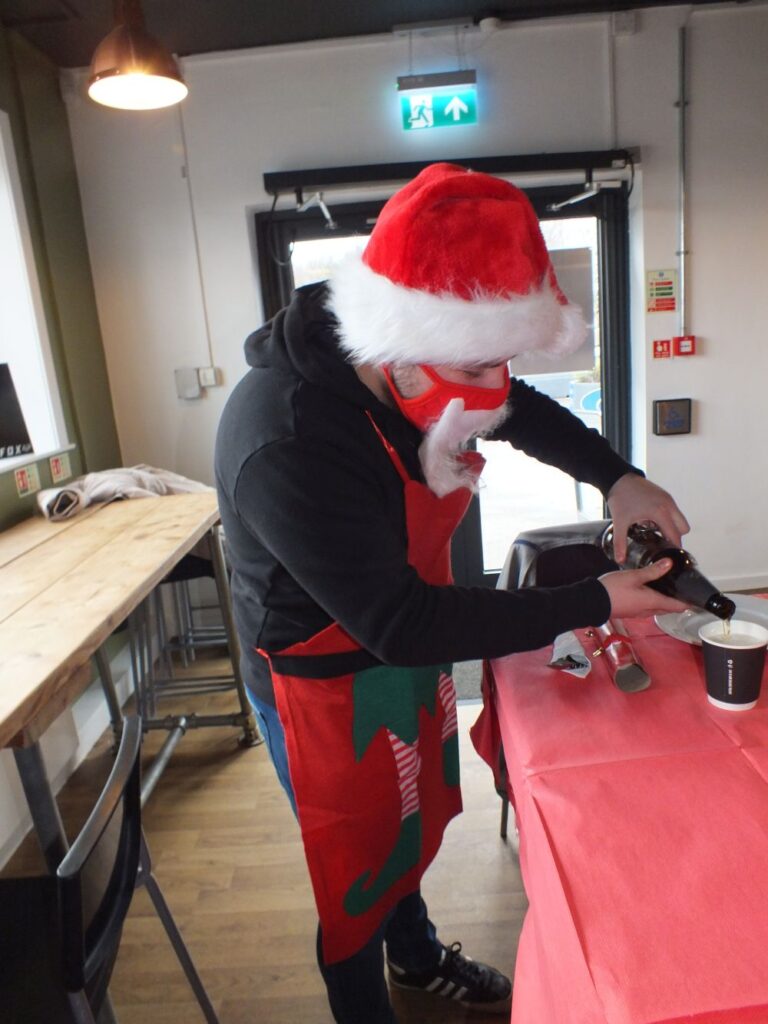 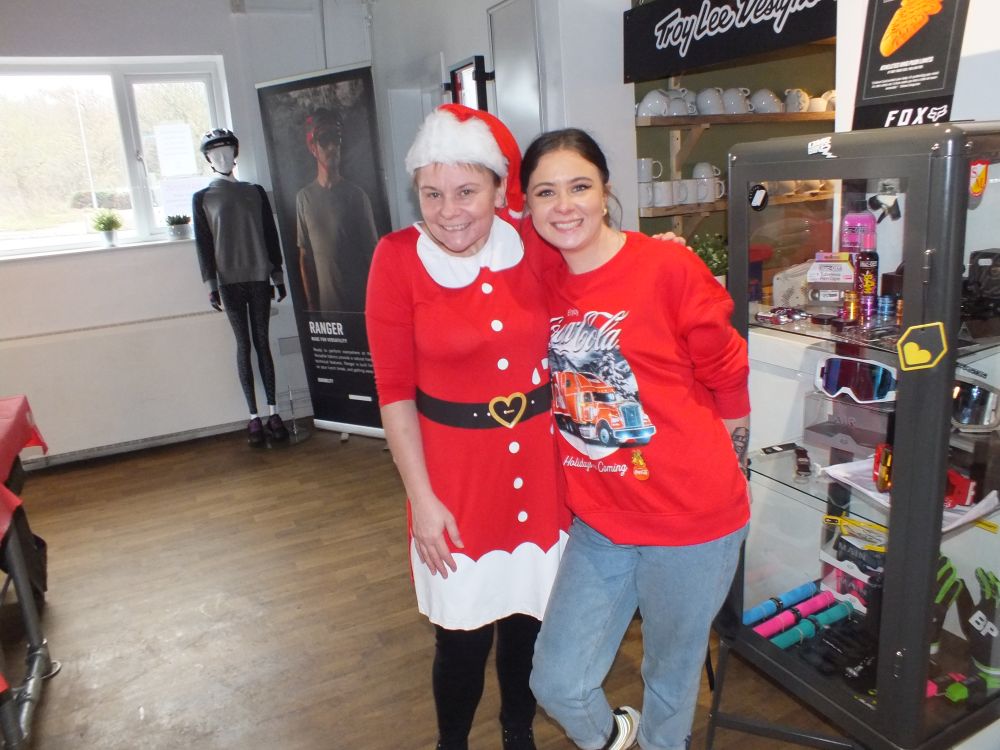 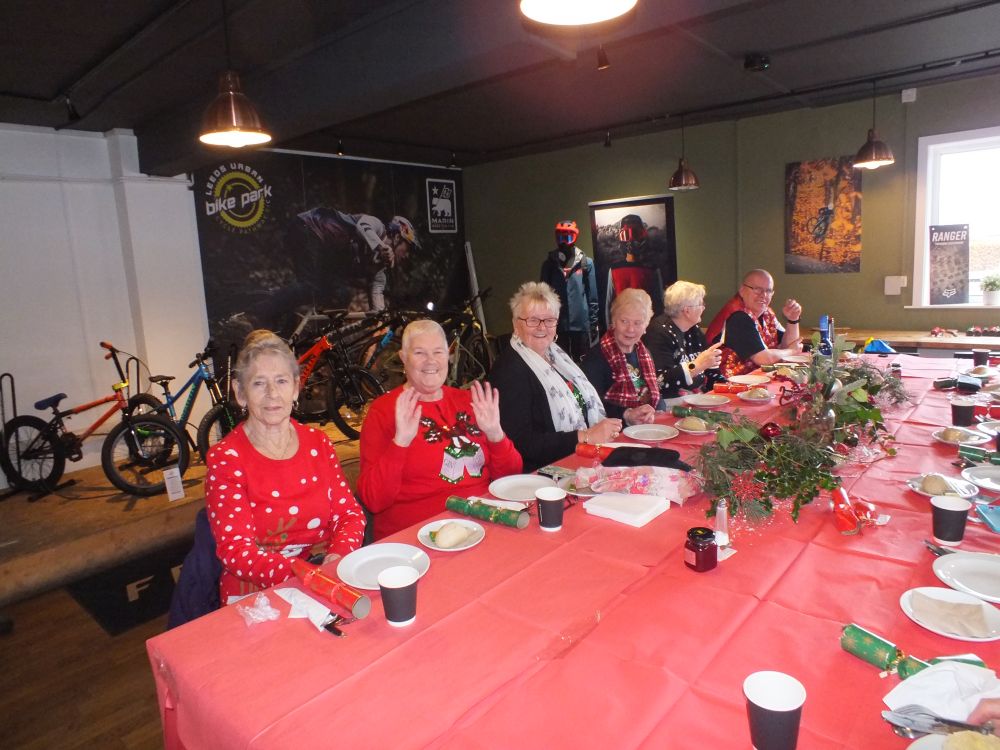 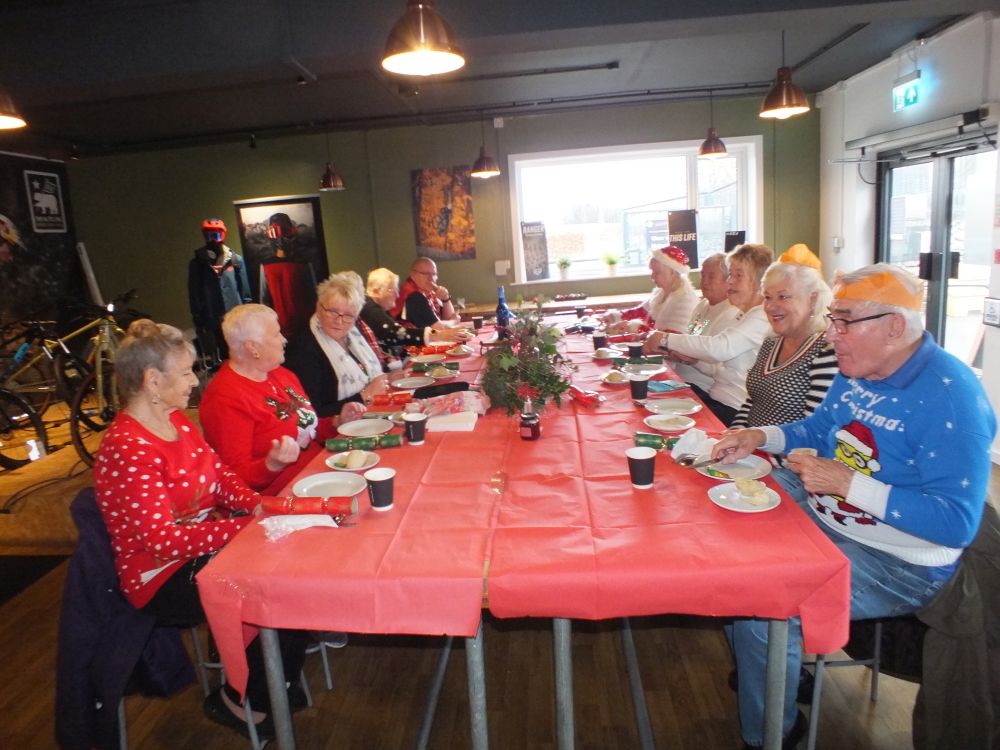 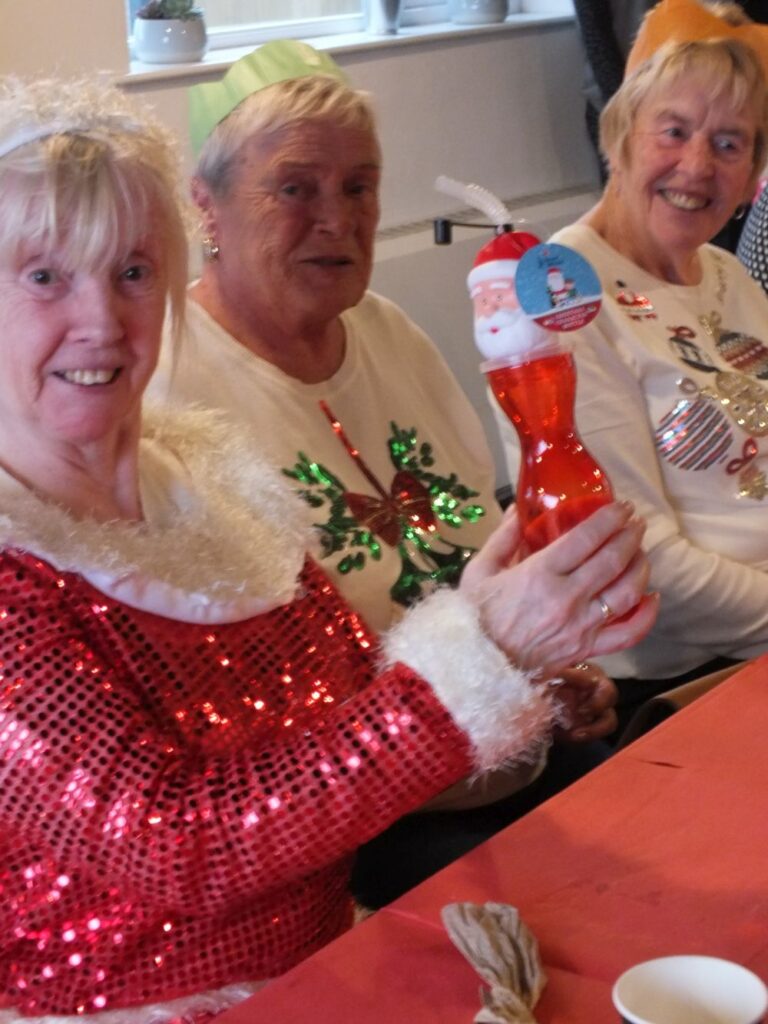 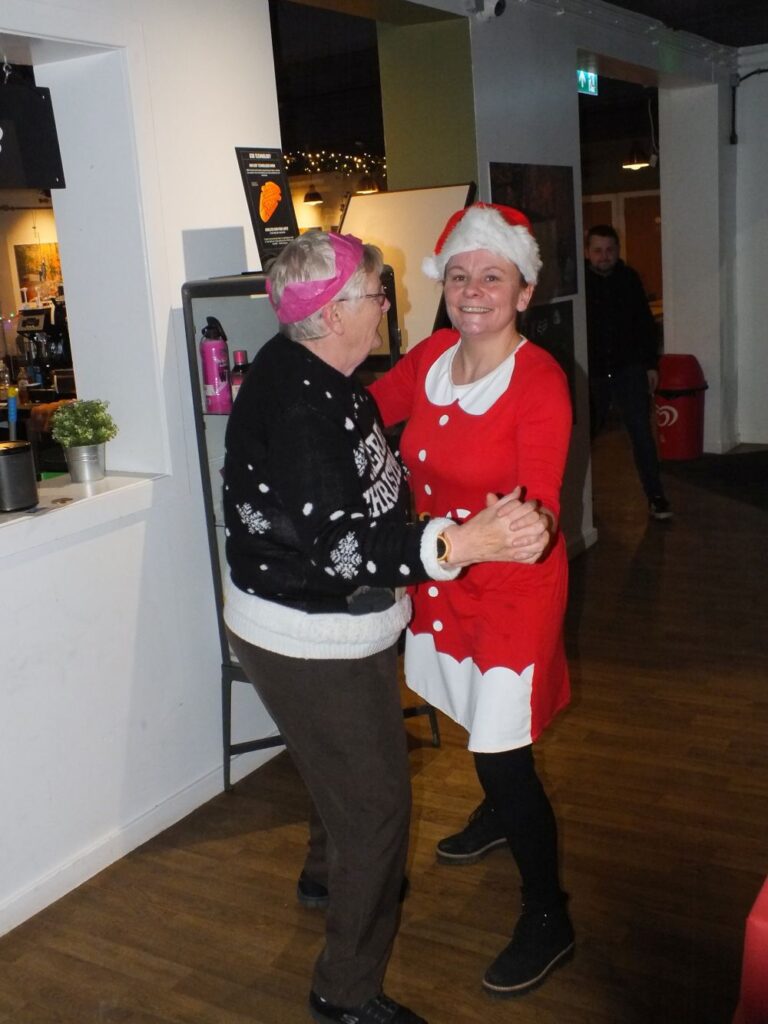 I asked Joanne about two months ago if the Cafe did Christmas Lunches, and if so could we get together and organise one. Joanne said she would ask Nicola (Manager) and get back to me. At this time I did not mention my plan to the group as the Cafe may not have been able to accommodate us. Joanne and Nicola said yes.

Between me, Carol Ely and Pat we came up with a date which allowed all of the group members who wanted to come, could do so.

So on 30 November 12 Members got together for our Christmas Lunch at The Leeds Urban Bike Park Cafe.

There is a room to the left of the Cafe, we all sat in there on a long bench, which allowed us to sit all together, it reminded me of my Beer Keller days in Leeds.

We Started with Pea and Ham soup, which was very thick and not watery. The main course was Turkey and all the trimmings. The Turkey was just right, not dry like I’ve had on many occasions at other places. Followed by Christmas Pudding and After Eight Mints.

Lager and Sherry was served. Hic. We pulled some Christmas Crackers, we gave all the toy tools from the crackers to Walter, MEA Centre Handyman, Staff and Volunteer at Middleton Elderly Aid.

A while ago Nicola asked the Arm in Arm walking group if they wanted to come in Fancy Dress, I also added if not, can you come with your Christmas Sweaters.

We had a competition for best Christmas Sweater, judged by Joanne and Alicia. It was won by Carol Hirst, who received a water bottle for walks. I also gave a diary to everyone.

Then I got up and made a very few seconds speech. Speeches are not really me. I thanked everyone for coming and the staff for putting on the meal. I surprised everyone by telling them that I would pay for all the meals. Because of this I asked everyone to give a large tip to the staff.

During the meal, we had plenty of Christmas songs as background music. I also asked Alicia, a couple of weeks ago who I had heard sing an Adele song, whether would sing for the party, she said yes. Well we did not expect Joanne and Nicola to get up and sing to us as well and to dance. We all sang along with the Sing Songs.

I asked for a Christmas song request, ‘Fairytale of New York’ by Kirsty MacColl and the Pogues. I think it was a good choice as now Mavis and Pat got up and joined the staff in the dancing. Poor Henri (staff) got pulled in to dancing, not his thing, very proud of you Henri.

We were allowed to stay an hour after closing. It started to get dark, and as we came in cars, I did not really want people to drive in the dark. So we thanked the staff and made our way home.

Mavis got a bottle of sherry to take home from Nicola (Manager) as Nicola said for “being Fabulates.”

Goodbye until next time.

“Had a great day at work today Christmas dinner for Middleton Elderly Aid Social Centre was so nice to have a catch up with my mums old friends. Especially Mavis Beechey and Patricia Webb we had a boogie and laughs!! Thanks to Kenneth Ingram for arranging it all with Nicola Hayes and thanks for doing all that food Alicia Stanger.

“All the staff hope you had a great time with you.”

“So today we welcomed Middleton elderly aid to the cafe for their Christmas bash! team Alicia Stanger, Emma Kellett, Joanne Thackray, Meena Beattie and Henri Dales in making their day.

“Running a business is hard work but the rewards are times like today.”

“Lovely to give to people this Christmas who may find this time lonely! Thank you to Kenneth Ingram, for organising and choosing our lovely cafe to have your party!”