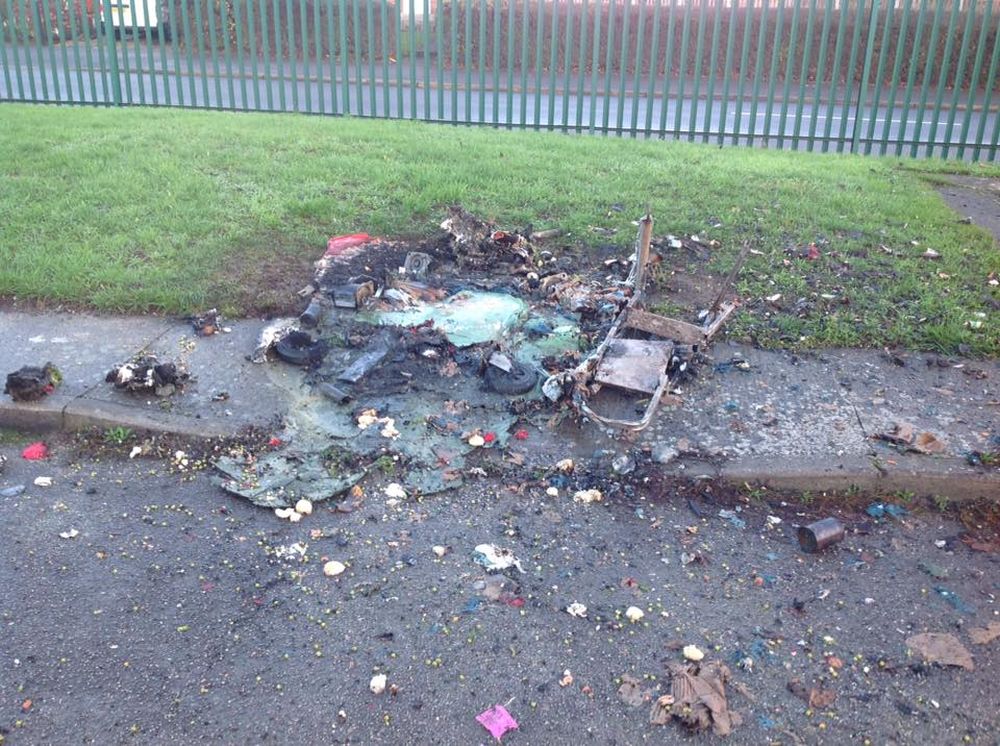 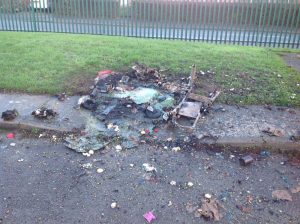 The melted mess of the bin had been discovered on the Monday morning when staff turned up for work at the centre and had to clean up the mess that it had made all over the car park that the members use.

Staff checked with the PCSO to see if Police had been called during the weekend, they then checked to see if the Fire brigade had come out but no one had seen or heard of this incident.

“The industrial waste bin had been stolen in the past and found on the estate on numerous of occassions, so ever since the bin has been chained up. This time because they could not pinch the bin they set it on fire. Had the bin been at the side of the property and set fire to the building, this would have been a different story.

In the past the washing line had been cut, and the outside tap turned on deliberately and left on causing a huge bill for the charity.

This tap was installed to water plants for the new gardening club. Also bedding plants were stolen, but retrieved from nearby to the centre.

Leeds City Council are to get involved in getting part of the fence covered in anti-vandal paint and hopefully more CCTV can be installed.

Middleton Elderly Aid has been given a grant to run a gardening club for the members, and a poly-tunnel is going to be used on the premises to grow plants and vegetables for their members to take part in the Gardening club.

In the Summer a person when weeding at the centre, pricked them selves on a used drug addicts hypodermic needle. This person then went through blood tests for 3 months to see if they had contracted a STD. Thankfully it turned out OK. This should never have happened, we need to keep this behaviour away from a centre for the elderly.

Do you parents know what your children are getting up on a night? Would you like this to happen in your garden or property?

“Up to 400 elderly people myself included, volunteers and staff visit this centre every week and it’s a shame that we have to put up with this mindless vandalism.”

Please help to put a stop to this now. Educate the young people on what Middleton Elderly Aid does for the elderly in Middleton.