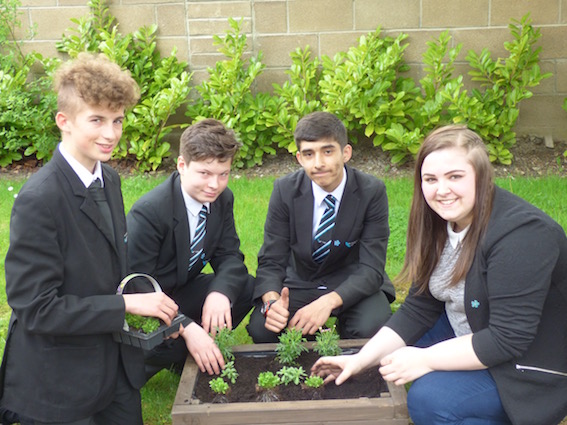 The Centre helps older people coming out of hospital to regain their independence and live at home again. South Leeds Academy has built a partnership with the centre through the Kissing It Better charity which has seen students visiting people in the centre regularly and making decorations and picture frames to make the centre a bit more homely.

When the centre wanted to brighten up its garden, the Academy’s Year 11 construction students stepped in. With £150 worth of materials donated by Jewson, the students built three raised planters and a bird box in their own time after school. They then held a cake sale to raise money for flowers and compost. Academy staff joined in donating more plants.

“It’s very nice. It will be lovely to have some interest and colour to look out at.”

Cllr Angela Gabriel, who is a Governor at the Academy and Chair of Beeston In Bloom said:

“This is a fantastic project. The students have learned new skills, helped the community and improved the quality of life for the residents as they recover.”

She added that Beeston In Bloom will work with staff and residents at the centre to maintain the garden.