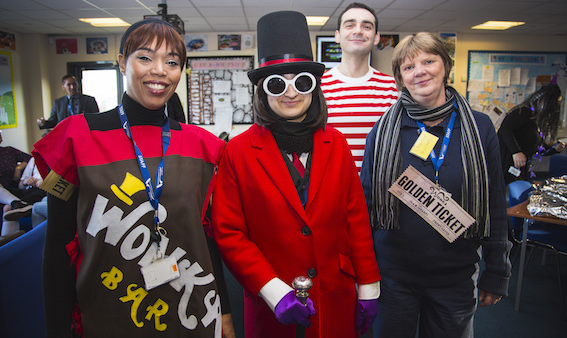 Staff dressed up as their favourite Roald Dahl character and During first break, there was a competition for pupils to ‘guess the staff character’. During second break, a ‘fashion show’ was held in the library compered by a Minpin (aka Mr Williams) at which a group of students had been awarded a ‘golden ticket’ issued by our very own Willy Wonka (aka Miss Tabassam) to attend the exciting show.

At break and dinner time, an audiobook recording of Fantastic Mr Fox was played over the tannoy system.

The celebrations continued into the evening when there was a very successful Year 7 parents evening. A ‘kiddies’ corner was incorporated where younger brother and sisters were read to by Bruce Bogtrotter from Matilda (aka Mr Peel) and did some colouring.

The day reinforced the importance of books and reading and backed up the work the Academy does every day around literacy, whilst having some fun.