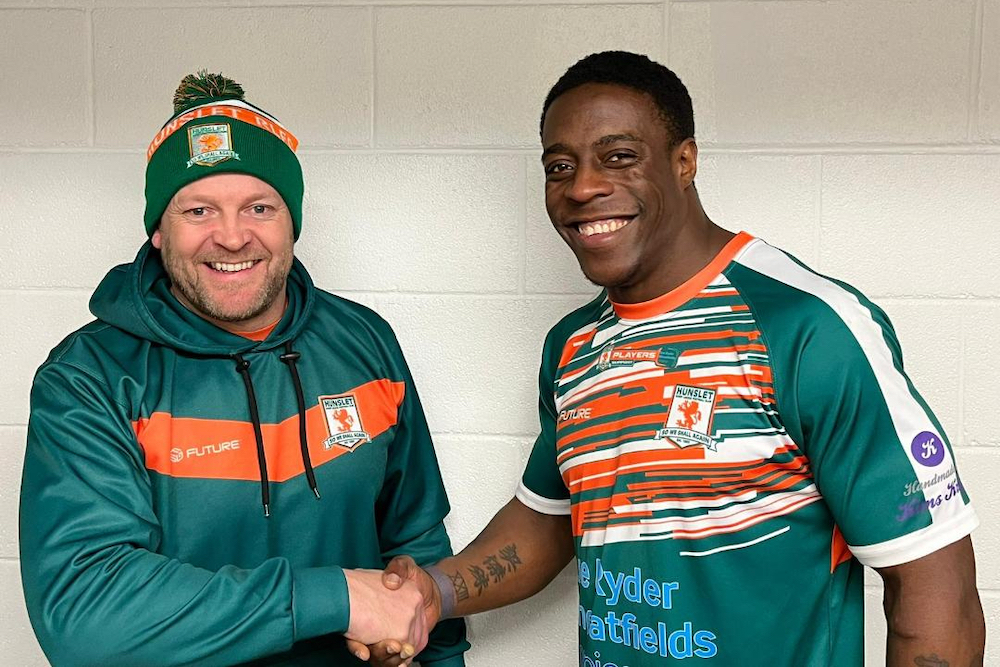 Alan ‘Killer’ Kilshaw’s first full season in charge at Hunslet RLFC saw a lean towards youth. With funds at a premium after the slashing of central funding, the club aimed at bringing through local talent. With big spenders Keighley and Swinton favourites for promotion (as came to pass) Hunslet hoped to lay a foundation for seasons to come.

This season sees a more level playing field and with increased sponsorship it’s hoped Hunslet can put in a serious bid for promotion and bring the fans back to the South Leeds Stadium.

Every club has its ins and outs at the end of a season but one name remains on the squad list, that of long serving fullback Jimmy Watson. The fan favourite celebrates his testimonial year this season after signing from Leeds Rhinos. But Watson will bring experience and leadership to the team as well as enjoying his 10th season in Myrtle, White and Flame.

One loss this year is Captain Duane Straugheir who has opted to move to Rochdale Hornets alongside former coach Gary Thornton. He has been replaced by former Bradford man Steve Crossley who brings Championship experience as well as leadership skills and is a big signing for the Parksiders.

Jamie Greenwood, who signed half way through last year from Siddal hopes to impress at hooker, and Nathan Newbound brought in from Midlands Hurricanes was signed after impressing in the Midlands club’s surprise 0-24 victory at the South Leeds Stadium last season.

Hunslet can claim to having a few marquee signings this season as along with Crossley from Bradford the duo of Michael Knowles and Adam Ryder join from Dewsbury. Knowles, an experienced back rower will bring skill and Ryder (a German international) strong running in the centre.

Former Hunslet Warriors back rower Aaron York returns to his home patch after a good spell at Doncaster (scoring a few tries past Hunslet in the process) and another local Sam Hallas joins as a hooker with experience at Leeds, Bradford and Newcastle Thunder.

The three-quarters will be strengthened with the signing of Joe Burton (from Bradford) who’s brother Olli was at South Leeds last season and father (Danny) is now part of the coaching staff. Also joining is 20 year old former Doncaster Toll Bar winger Kieron Lawton signed again from Midlands Hurricanes.

The killer punch may come with the final signing of former London Bronco’s and Sheffield Eagles winger Rob Worrincy. The 38 year old has bags of experience and talent and maybe the cherry on top of this season’s cake.

As with any new squad the process of gelling starts in training but can only be really seen in at match level, and Hunslet start this season with 3 friendlies before the League Campaign begins.

Hunslet are to play either Oulton or Heworth in the Challenge Cup before the League One campaign starts on Sunday 19 February away at Doncaster.

Match day prices this season are £15 for adults; £10 for concessions; Students and Under 21s £5 and Under 16s go free. An initiative with a South Leeds based distributor of composite materials (Tricel Leeds) means that an accompanying adult of a child will only pay £5 whilst the child goes free, aiming to bring in the next generation of supporters.