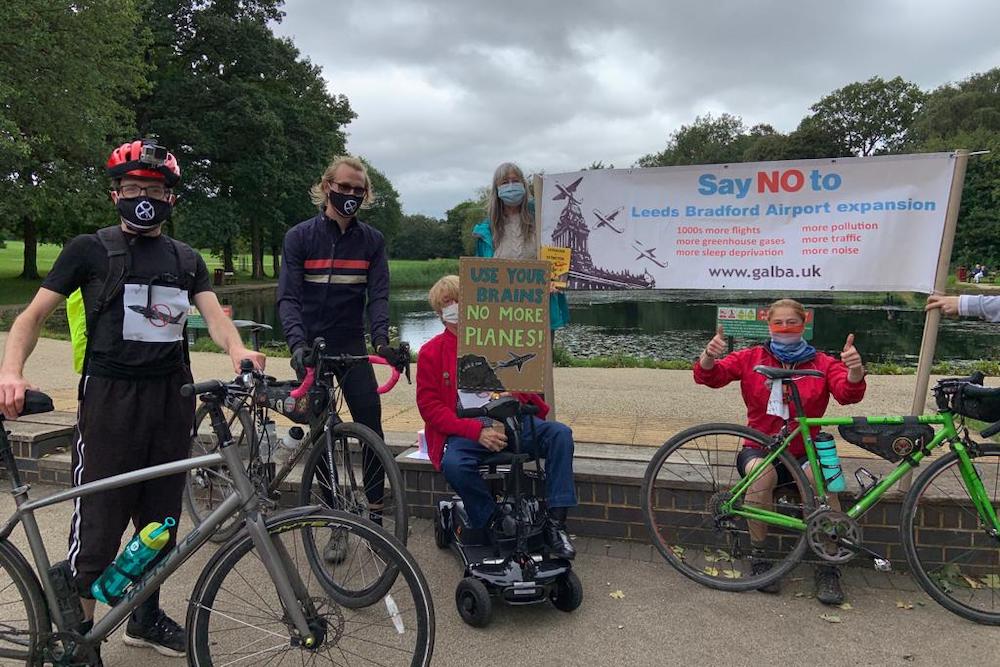 Ride the Noise: campaigners cycle the outline of LBA’s ‘noise map’ to highlight areas affected by increased noise if airport expansion goes ahead

On Saturday (29 August 2020), the same day that Tour de France riders set off from Nice, cyclists from the Group for Action on Leeds Bradford Airport (GALBA) which is opposed to the airport’s expansion plans, set off from Millennium Square in Leeds. They cycled a route that matches the outline of the ‘noise map’ in Leeds Bradford Airport’s expansion application. Their aim was to highlight just how many more parts of West Yorkshire would be affected by increased noise if the airport is allowed to expand.

The ‘noise map’ shows the West Yorkshire communities that would suffer more aircraft noise – from Wakefield in the south up to Ilkley and beyond in the north, and over to Bingley and Bradford in the west. A swathe of Leeds neighbouhoods under the flightpath would also experience more noise, including Belle Isle, Middleton, Rothwell, Robin Hood, Armley, Bramley, Richmond Hill, Little London, the city centre, as well as Hyde Park, Headingley, Otley and areas close to the airport.

“We’re not going as far as the Tour de France riders! But we are alerting people to what Leeds Bradford Airport expansion would mean. LBA wants to extend daytime flying hours to start at 6am and finish at 11.30pm, to impose no limit on the number of noisy flights permitted between 6am and 11.30pm, to allow planes to land up to 1am if they are behind schedule and to remove the limit on the total number of flights per night.

“LBA’s proposed night time ‘quota system’ would allow the equivalent of 20 flights by Airbus 320s between 11.30pm and 6am every night in the 6 months of summer. LBA’s own planning application says that 123,000 more people would be exposed to increased night-time noise.”

“Of course, LBA’s plans also would mean doubling the airport’s greenhouse gas emissions in the middle of the climate emergency. If expansion is allowed, from 2030 the airport would pump out more greenhouse gas emissions than allowed in the carbon budget for the whole of the rest of Leeds. We all share the same climate so we all need to protect it – for the sake of everyone’s future.”

The cyclists set off from Millennium Square in the morning and stopped for breaks, including Middleton Park in south Leeds. They were greeted by fellow airport campaigners with a banner showing their opposition to LBA expansion.